Jack Kerwick
|
Posted: Feb 11, 2016 12:01 AM
Share   Tweet
The opinions expressed by columnists are their own and do not necessarily represent the views of Townhall.com. 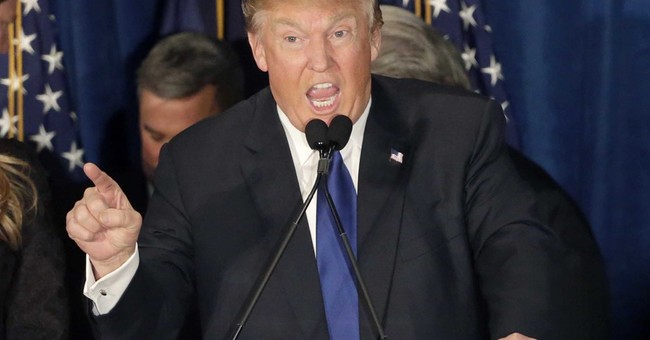 For identifying the hypocrisy, inconsistencies, and, at times, opportunism of Donald Trump’s critics, both readers and acquaintances have concluded that I have endorsed Trump. The truth is that I’ve as yet endorsed no one.

There are indeed reasons for a conservative or libertarian to recoil from Trump.

(1) As I noted near the beginning of this contest, Trump is most certainly not any kind of traditional or classical conservative. There simply isn’t anything in his history to suggest that he’s ever had any kind of curiosity about, to say nothing of commitment to, the conservative intellectual tradition. Nor has Trump at any time indicated any kind of sympathy for libertarianism.

In fact, until relatively recently, Trump seemed to have had more affinity with the Democrat Party than he ever had with the GOP.

Trump spent decades fattening the coffers of such loathsome Democratic politicians as Ted Kennedy, Hillary Clinton, Harry Reid, John Kerry, Charles Rangel, and Charles Schummer. He also supported Rahm Emmanuel’s run for mayor of Chicago. Neither Trump nor, evidently, any of his proponents seem to be bothered by this, accepting as unproblematic the Donald’s assertion that this was the price that he had to pay in order to do business.

But this rationale of Trump’s is problematic: It’s no justification at all.

(2) Actually, it’s worse than even this, for routinely, over a period of decades, elevating his own self-interest above that of the well-being of the country, Trump in effect vindicates the judgment of many that he’s a narcissist.

In funding the very party that he’s now running against, Trump facilitated their agenda—which he now claims to recognize is destructive of America. Yet he traded off these down payments on the destruction of his homeland in exchange for building his empire.

Trump has long been both a billionaire and a celebrity. In other words, he is a man with much influence. However, though he is approaching 70 years of age, Trump has never deployed any of these resources of his toward reversing the disastrous course upon which America has been plunging for much of his adult life. Quite the contrary: he’s used them to fund politicians who are all too eager to lead us down this path.

(3) For all of the talk of Trump being a straight shooter, he has not infrequently contradicted himself. For example, while he now insists that he only gave to Democrats for business-related purposes, as recently as 2004 he told Wolf Blitzer: “In many cases, I probably identify more as a Democrat.” The economy, he continued, “seems” to do “better under the Democrats than the Republicans.”

(4) Trump has, in fact, openly supported various ideas that have been perfectly at home among liberal Democrats.

While claiming to “hate the concept of abortion,” Trump at one point nevertheless self-identified as “pro-choice”—actually, as “very pro-choice.”

He also expressly favored a single-payer healthcare system. In his book, The America We Deserve, Trump said that while he’s “a conservative on most issues, I’m a liberal on this one.”

Of course, as he reiterated as recently as the New Hampshire debate last week, Trump is an impassioned advocate of “eminent domain,” i.e. the enterprise of compelling private property owners to sell their holdings to the government for both public and private purposes.

Even when it comes to what’s become his signature issue, immigration, Trump’s position sounds essentially like amnesty by a longer route: Those who are here illegally must leave, though as long as they aren’t criminals, they will be permitted to return. As he told Joe Scarborough: “I believe in the merit system. If somebody’s been outstanding, we try and work something out.”

Americans for Legal Immigration Pac (ALIPAC) has added Trump to their “[Eric] Cantor List”—their list of amnesty proponents. Numbers USA says that Trump is “Harmful” on the issue of amnesty and “Unhelpful” when it comes to reducing legal immigration. The organization assigns Trump an overall grade of “C.”

Trump also blasted Jeb Bush for once intimating that taxpayers needn’t spend half-a-billion dollars a year on “women health issues.” Trump implied that “we”—the taxpayers, that is—should be spending at least that amount and possibly more.

That Trump is every bit as much a lover of Big Government as is any other liberal Democrat (or Republican) is abundantly clear not only from the foregoing considerations but from the fact that he is forever telling us how he is going to restore order to the cosmos: Trump never talks about liberty or freedom.

To repeat: Trump’s history betrays sympathy for leftist causes. The GOP is as unpopular as it is among its base of support because it is (rightly) perceived by them to have aided and abetted leftist Democrats in pursuit of basically one and the same leftist agenda.

Ergo, politically speaking, in effect, Trump shares essentially the same worldview as that of “the Establishment.”

(6) Trump is a lifelong businessman, the owner of his own company. However, the last thing that any lover of liberty wants is for the President of the United States to look upon the country as a business, much less his business.

A business is an enterprise, i.e. an association of human beings united to one another as servants of the goal that defines the enterprise. Self-chosen pursuits have no place in such a scheme: what ultimately matters is the collective purpose of the association.

(7) Finally, Trump’s brash demeanor, his arrogance, and his readiness to ridicule and mock even the physical appearances of his critics are unbecoming of anyone, but particularly unseemly for a person with presidential aspirations. More concerning, though, is the precedent for this office that a Trump presidency could set.

Next time, we’ll look at some reasons for The Donald.

The latest mass shooting you probably didn’t hear about
Hotair
Opinion: No Hagiography for Ginsburg
Redstate