Trump is No Conservative, But Neither Is John Kasich 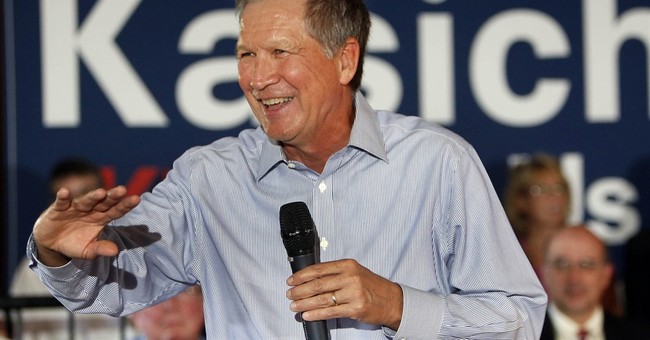 Donald Trump may not be a conservative. His Republican opponents, both his rivals in the presidential primary contest as well as their apologists in the media, are laboring tirelessly to discredit their party’s front runner on this ground.

This line of attack, however, is disingenuous, for neither are their candidates of choice—Jeb Bush, Marco Rubio, Carly Fiorina—particularly conservative.

And Kasich is probably even less “conservative” than his peers.

Five years ago, Kasich called for repealing laws permitting birthright citizenship for the children of illegal immigrants. Last year, though, Kasich said that his views on this matter have—you guessed it!—“evolved.”

Kasich implored Congressional Republicans to cooperate with President Obama’s Executive Order on illegal immigration in resolving this issue. “The country needs healing,” he remarked. “I wouldn’t ever be one to tell you that I don’t change my mind or that my thinking doesn’t evolve.”

Kasich added that he is “a different guy than I was years ago,” and noted that “this job [of being the governor of Ohio] grows you up.”

Read this carefully: Kasich would have us believe that his transition from opposing efforts to “reward” illegal immigration to favoring, in effect, amnesty, is a sign of his maturity. The implication is clear: Those who oppose amnesty are immature.

But, unsurprisingly, there is more.

“So when I look at a group of people who might be hiding, who may be afraid, who may be scared, who have children, I don’t want to be in a position of where I make it worse for them.”

Kasich claims that “I don’t want to see anybody in pain.”

As for abortion, Kasich subscribes to the same conventional GOP line: It is always wrong for mothers to kill the children growing in their wombs except for when it isn’t. And it isn’t wrong if the child was conceived as a consequence of rape or incest, or if the child poses a threat to the mother’s health.

Yet this past week, Kasich caught some heat from “a leading pro-life organization”—the Susan B. Anthony List—for castigating Republicans for focusing “too much on this one issue.” Last weekend, while on CNN’s State of the Union, Kasich said: “I think that we focus too much on just one issue, and now that the issue of gay marriage is kind of off the table, we’re kind of down to one social issue.”

So, according to Kasich, Republicans have but one “social issue” now, and they spend too much time obsessing over the killing of the most innocent of human beings among us. As for “gay marriage,” which Kasich also claims to oppose on moral grounds, the ease with which he is willing to allow the government—in this case, the Supreme Court—to settle a moral issue for him speaks volumes. Imagine if the opponents of slavery had the same attitude?

But back to abortion: Pro-life groups also blasted Kasich for refusing to defund Planned Parenthood after revelations that this abortion provider had been harvesting the body parts of aborted babies.

While speaking to the Urban League in May of 1999, Kasich said of (so-called) “racial profiling” that it “should be ended in every community in America.” This is “just not the way our justice system is supposed to work.”

Though Kasich prefers to allow local authorities the chance to voluntarily end the practice, he was quick to add that it may be necessary for the federal government to intervene.

Kasich, that is, is open to the prospect of nationalizing the police.

Kasich also endorses “affirmative action”—but not “quotas” (as if there’s a real difference).

Regarding education, Kasich has argued for allotting 95%, as opposed to the current 65%, of federal monies to subsidize public education. He as well contended that federal and local governments should provide more funding for after school and weekend programs for children.

When it comes to “day care choices,” Kasich insists that the federal government must relieve its “many strings and restrictions” that it attaches “to the money” that “it gives out,” for “the subsidized centers often are not responding to the needs of the local parents.” “If the federal government is going to be involved in subsidizing day care,” Kasich adds, “then our role should be to expand the choices of parents, not reduce them.”

Kasich also maintains that the government should insure that employers provide “flex time in the workplace to allow working parents more time with their children.” And he as well urged for the redirecting of Americorps monies to teens and the elderly for purposes of mentoring kids.

In 2013, against the protestations of the members of his own party and the Tea Partiers who at one time supported him, Kasich expanded Medicaid under Obamacare to 275,000 Ohioans.

When it comes to the redistribution of income and wealth for purposes of “welfare,” Kasich is all for it, and he sounds every bit as insufferable as Democrats who exploit decontextualized Biblical teachings on poverty for the sake of serving this end. Worse, he condescends to the members of his own party who disagree with him on this front.

Just earlier this year, Kasich remarked: “It’s really odd that the conservative movement—a big chunk of which is faith-based—seems to have never read Mathew 25” (i.e. a chapter on helping the poor). Kasich cited the latter while justifying his decision to expand Medicaid, and he asks of conservatives: “Why don’t we get into feeding the hungry and clothing of the naked and helping the imprisoned and helping the lonely?”

We—meaning, of course, the government via the resources in time, energy, and money that the Kasichs of the world plan on confiscating from the rest of us—need to comply with the Welfare State and “get away from the judgment side of” this topic: “We” mustn’t judge those whose existence we are made to subsidize.

In late 2013, Kasich charged Republicans with waging a “war on the poor!” “I’m concerned about the fact [that] there seems to be a war on the poor. That if you’re poor, somehow you’re shiftless and lazy.”

The New York Times wrote: “But few have gone further than Mr. Kasich in critiquing his own party’s views on poverty programs [.]”

The Times praises Kasich for having “surprised and disarmed some former critics on the left with his championing of Ohio’s disadvantaged, which he frames as a matter of Christian compassion.”

This is no small amount of praise coming from the Times. But there is more:

“In his three years as governor, he has expanded programs for the mentally ill, fought the nursing home lobby to bring down Medicaid costs and backed Cleveland’s Democratic mayor, Frank Johnson, in raising local taxes to improve schools” (emphasis added).

Suffice it to say, that while Trump may not be a conservative, John Kasich most definitely is not.