Trump is No Conservative, But Neither is Bush: A Look at Jeb's Record 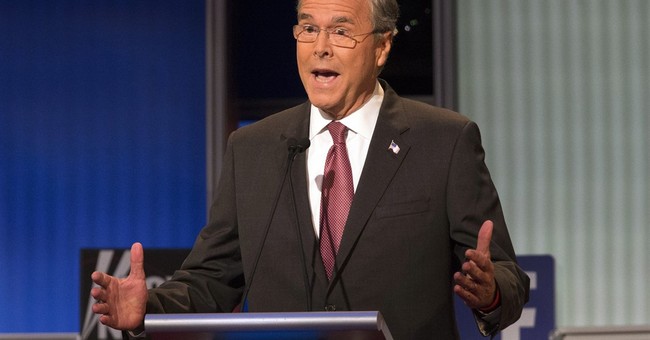 When Donald Trump’s critics in the Republican-friendly media blast him for not being a genuine conservative, they are correct.

For roughly the last quarter of a century, Trump has spent most of his time—until about five years ago—helping to get Democrats elected and reelected. One-third of all of his political donations have gone to supporting Democrats and, by implication, their causes.

Though he always claimed to revile abortion, he nevertheless explicitly self-identified as “pro-choice.” Trump favored imminent domain and a single-payer national health care system. In fact, he even once remarked to Wolf Blitzer that, “in many cases,” “I probably identify more as a Democrat,” for it “seems” that “the economy does better under the Democrats [than it does] under Republicans.”

And Trump spared no occasion to mock Republican voters themselves as “too crazy right.” Pat Buchanan he said represents the “really staunch right wacko vote.”

If a real conservative is supposed to be one who supports a limited, decentralized government and, hence, individual liberty, then Trump is no different than virtually every other Republican in failing to meet this definition.

In some respects—namely, the calamitous Iraq war, which he always opposed—he is more “conservative” than his competitors and pundit critics.

In other words, it is Trump’s style, and not the substance of his record, that distinguishes him from his rivals.

Take, for instance, the one-time GOP frontrunner, Jeb Bush. Though his supporters on Fox News and in some quarters of talk radio tout Bush’s “conservative” bona fides, no less a left-leaning columnist than Nate Silver thinks that Jeb may be “too liberal” to win his party’s nomination.

Using several admittedly imperfect criteria, Silver drew “ideological scores” of Jeb and found that he is more “moderate” than Mitt Romney and John McCain, but not nearly as “conservative” as his big brother, George W.

You read that correctly: Romney, McCain, and Bush II are more “conservative” than Jeb.

Jeb, as everyone now knows, is an unabashed immigration enthusiast and proponent of amnesty (“comprehensive immigration reform” by its true name). Yet he also supported the bank bailouts of 2008, and in 2003, he deployed $310 million in stimulus money toward a single company, Scripps—which was hardly in dire economic straights—for bio-medical research.

When it comes to abortion, Bush too claims to be “pro-life,” but he claims that women should be free to choose abortions in circumstances of rape, incest, and when the mother’s life is endangered. This is standard GOP boilerplate, for sure. But that is the problem: If abortion is immoral because it is nothing less than the killing of an innocent human being, than the circumstances in which that innocent life comes into being are morally irrelevant. The baby is still innocent.

Moreover, to know whether someone is genuinely “pro-life,” the question that Republicans must answer is this: Should abortion be illegal? Any person who doesn’t answer this question in the affirmative is “pro-choice,” for while they, like Trump, may personally detest abortion, they do support the right of others to choose abortion.

Jeb too has chastised his fellow Republicans for the “tone” and “intensity” of the manner in which they articulate their positions on such gender-related issues of abortion and those issues that concern minorities.

In 2012, while on Meet the Press, Bush said that he is “concerned about” Republicans’ rhetoric given that the “

Just last week during the Fox News/GOP debate, Bush conceded that while he sat as a director of the Bloomberg Family Foundation, the latter gave tens of millions of dollars to fund Planned Parenthood. Yet, incredulously, he insisted that he was ignorant of this fact.

Perhaps we shouldn’t be surprised. Since Donald Trump was asked about his bankruptcies, maybe Bush should’ve been questioned about his past business decisions.

In 1988, Bush and a partner borrowed money from Broward Federal Savings and Loans in Sunrise, Florida. The crisis hit and federal regulators realized that Bush and his partner defaulted on $4.6 million loan. The two were made to pay back a meager $505,000: the remaining $4 million were thrust upon taxpayers.

When Bush was later asked if he knew that Broward repaid the rest of the loan with taxpayers’ monies, he replied: “Helllllll no. Absolutely not.”

Bush has been a huge supporter of “affirmative action,” and as governor of Florida, he used his power to aggressively promote more racial and gender diversity among justices, contractors, and in college admissions. His “One Florida” program was designed to insure that the racial and gender privileges for minorities and women demanded by “affirmative action” are secured.

Jeb has always championed his brother’s foreign policy, including and especially his brother’s decisions to invade Afghanistan and Iraq. These were gargantuan foreign adventures that have come at the cost of incalculable sums of blood and treasure. The war in Iraq specifically polarized the country like few other issues, and it costs the GOP its control of Congress and the Presidency.

Jeb still applauds No Child Left Behind for having forced lazy states to initiate reforms. And, of course, he staunchly defends “Common Core.”

Jeb Bush is just one example among legions of examples of Republican non-conservatives. I chose to focus on Bush only because he is among the top tier GOP presidential candidates, and because Trump’s critics on Fox and elsewhere cast Bush as a conservative.

We would be well served to remember this.