Trump Is No Conservative, But Neither Is....Marco Rubio 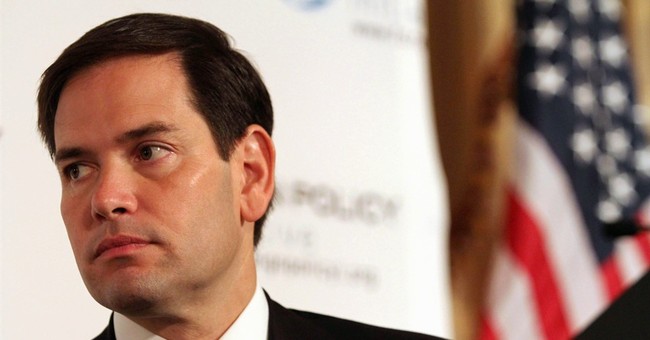 On its face, few things in the contemporary American political scene are as puzzling as Marco Rubio fans blasting Donald Trump for not being a true “conservative.”

As I’ve argued recently, given his track record, the unprejudiced observer can only conclude that Trump is not a conservative.

However, his GOP critics generally, and Marco Rubio admirers specifically, are at once intellectually dishonest and disingenuous when they level this charge against Trump, for their implication is clear: He is not a conservative, but Jeb, Marco, and anyone else who the Republican Trump bashers on Fox News and other places favor is a conservative.

Nothing in the world could be further from the truth.

Though a one-time darling of the Tea Party—Americans who believed that on both the domestic and foreign fronts, our government has grown too large in scope—Rubio clings to the same adventurous, democratizing foreign policy vision shared by George W. Bush and the Republicans who were ejected from power in 2006 and 2008 largely because of it. It is “essential” for America to “spend money and risk lives on foreign policy,” Rubio has said.

While “we don’t always agree with other democracies,” Rubio stated, “very rarely do we find ourselves fighting them.”

Rubio also told the (liberal) Brookings Institution that he took issue with the members of his own party who choose to heed John Quincy Adams’ advice to avoid going “abroad, in search of monsters to destroy.”

And yes, Rubio is no less a proponent of socialized medicine than is his Republican and Democratic peers inasmuch he is a fan of Medicare and Medicaid.

In 2014, Rubio complained that Obamacare would essentially bankrupt Medicaid.

In 2013, he called for expanding mental health centers. This, he insured those who may object to pouring more tax monies into the health care system, is what “compassion” demands.

Yet the one issue on which Rubio really betrays his true political identity is that issue that Ann Coulter (among others) quite plausibly refers to as the single greatest issue facing America: immigration.

Three years ago, while Republicans, independents, and conservatives were mourning over the reelection of Barack Obama, Rubio rubbed salt in the wounds when he joined the Gang of Eight and allied with the president and his party in order to secure amnesty for millions of illegal immigrants.

This was horrible enough. But when the members of the base of his own party rebelled, Rubio alternated between insulting their intelligence by packaging this sweetheart deal to the Democrats as “conservative” and insulting them.

Some years ago, when Arizonans passed Senate Bill 1070—which would allow state authorities to enforce the federal immigration laws that the federal government refused to enforce—Rubio opposed it. Furthermore, he accused Arizonans of favoring a “police state.”

In 2013, while busily marketing his designs for amnesty, Rubio claimed that there were but two alternatives to his plan. Some of his critics favored making “the lives of immigrants” so “miserable” that they would self-deport. Others want “to basically ignore the problem [.]” Thus, they support a “de facto amnesty.”

Notice, from Rubio’s perspective, everyone who disagrees with him is either heartless or apathetic.

Yet this was not the only time that Rubio attempted to prove that he was more compassionate and concerned than other icky conservatives.

In a speech to the National Association of Latino Elected & Appointed Officials in 2013, Rubio characterized his opponents (who were all on the right) as wrongly viewing illegal immigration “only as a law and order issue” (emphasis added). It is this, he admitted. “But we know it’s much more than that.”

So what else is it? It’s “also a human issue,” Rubio told his audience (emphasis added).

“These [illegal immigrants] are real people. These are human beings who have children, and hopes, and dreams. These are people that are doing what virtually any of us would do if our children were hungry, if their countries were dangerous, if they had no hope for the future.”

So, illegal immigration is a “human issue.” But for Rubio, the only humans who seem to matter are the illegal immigrants. Those human beings who make up the families of the Kate Steinles of America—Americans who have had their lives and communities destroyed by illegal immigrants—evidently don’t register in Rubio’s humanitarian calculus.

When Rubio was Speaker of the House in Florida, there were multiple bills that promised stiff penalties for illegal immigrants and their employers that Rubio lifted not a finger to move along. He also endorsed measures that would grant illegals the opportunity to pursue a college education while paying in-state tuition fees!

In 2012, Rubio promoted his own version of the much despised DREAM Act. While the original act supplied illegal youth with a “path to citizenship” under the condition that they enter either college or the military, Rubio’s rendition promised a path to “non-immigrant visas.” Obviously, Rubio’s DREAM Act no less than the original legalizes illegals.

As of this moment, Rubio rejects Trump’s proposal to repeal “birthright citizenship.”

Now, the fearless Colin Flaherty, author of the much praised, White Girl Bleed A lot, and the equally respected, Don’t Make the Black Kids Angry, reveals that Marco Rubio is the latest presidential candidate, after Bernie Sanders, to legitimize the sham that is the “Black Lives Matter” movement.

Rubio recently described the BLM movement as “legitimate.” In making his point, he referred to a black friend who (allegedly) was pulled over by police nine times over an 18 month period.

And not once did Rubio’s friend even get ticketed.

Flaherty quotes Rubio as saying that “for a number of years” members of “the African-American community” have experienced “a growing resentment” over “the way” they’ve been treated by “criminal justice and law enforcement.” He adds that it is “endemic” that “in some communities in this country” young black males are more likely to have some involvement with “criminal justice than higher education.”

A “significant percentage of our population…feels they are locked out of the promise of this country.” This is what accounts for the “anxiety and frustration” that “we are now seeing expressed.”

Flaherty dispatches Rubio’s argument easily enough. “If Rubio thinks robbing causes anxiety for the robber,” he comments, “he should ask a victim about their anxiety after they ‘interact’ with a perpetrator of black crime.”

Again, as in the case of illegal immigration, we see Rubio sympathizing with the “illegals”—not the victims.

Trump may not be a conservative. But Marco Rubio definitely is not one either.