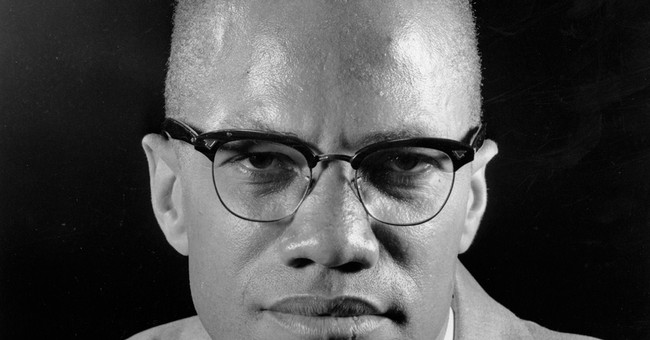 Malcolm X has been mythologized. According to the myth, there are, essentially, two Malcolms: the “pre-Mecca” Malcolm and the “post-Mecca” Malcolm X. The former, a national minister for Elijah Muhammad’s Nation of Islam, preached black separatism. The latter, in glaring contrast, rejected the Nation and promoted interracial unity.

That this is revisionism at its best (or worst) is understood by the inconvenient fact that it omits:

(1)Malcolm X taught that the white race was the creation of an evil black scientist named Yacub.

(2)Malcolm taught that history would culminate in a racial Armageddon in which God would enable blacks to bring about the extermination of the white race. And how would this occur? According to Malcolm X biographer Bruce Perry, Malcolm, following Elijah Muhammad, informed his congregants of “the mother ship,” a “wheel-shaped flying saucer that contained hundreds of ‘baby planes.’ Each baby plane carried bombs filled with two tons of a powerful explosive. Piloting the planes, he said, were men who had been trained to fly since the age of six—men who had never smiled.”

(3) In 1962 a French airliner crashed and 121 whites from Georgia were killed. Malcolm’s response seems not to have made it into any of the collections of his quotations: “I should like to announce a very beautiful thing that has happened. I got a wire from God today. He really answered our prayers over in France…We will continue to pray, and we hope that every day another plane falls out of the sky.”

(4)Whites, Malcolm taught, were “devils.” But it wasn’t just whites for whom he reserved his venom. His black rivals he showered with degrading insults as well. Take, for example, Malcolm’s public comments on Martin Luther King, Jr.

King, Malcolm said, was “a chump, not a champ.” King was “a little black mouse sitting on top of a big white elephant” [the United States]. When King received the Nobel Peace Prize, Malcolm publicly remarked: “He got the Peace Prize; we got the problem.” Malcolm added: “I don’t want the white man giving me medals.” King, he said, “is the best thing that ever happened to white folks. For white folks! As long as anybody can keep Negroes nonviolent, it helps white folks.”

By the way, Malcolm X made these remarks after his split with the Nation of Islam.

(5)On January 28, 1961, Malcolm met with the Ku Klux Klan in Atlanta, Georgia. On behalf of the Nation of Islam, he sought to elicit help from the Klan in obtaining land in the South that could be used as an independent nation for black Americans. According to Bruce Perry, Malcolm blamed Jews for hijacking the civil rights movement by promoting integration, and he expressed his dismay to the Klansmen that they hadn’t yet killed King.

(6) Booker T. Washington, Malcolm said, was a “white man’s nigger,” Jackie Robinson and Joe Louis were “stooges” for “the white man,” and the NAACP was a “black body with a white head.” In fact, as far as Malcolm was concerned, every black integrationist was either a “Quisling” or an “Uncle Tom.”

Against Elijah Muhammad’s orders to refrain from commenting on the assassination of JKF, Malcolm remarked to the media that Kennedy’s murder was a case of “the chickens coming home to roost” and that this made him “glad.” Livid, Muhammad reacted, and Malcolm was in effect shown the door.

But this wasn’t the end of it: Malcolm threw himself at “the Messenger’s” mercy by beseeching him, on multiple occasions, to reinstate him—all to no avail.

It was then that Malcolm retaliated by publically charging his former mentor with having fathered at least eight illegitimate children with several of Muhammad’s young assistants.

And it was then that the call for Malcolm’s head was issued.

In desperate need of a new public relations image, Malcolm made his trek to Mecca where, after a mere 11 days, he returned to the states a new man, a champion of the brotherhood of all men.

Malcolm founded a new organization, the Organization for African American Unity (OAAU). Its newspaper continued to feature the same incendiary racial rhetoric—e.g. headlines like “Racist America”—for which Malcolm was known, and Malcolm himself pledged to haul the United States government before the United Nations for its violation of the “human rights” of its black citizens.

However, on February 21, 1965, while about to address a crowd at the Audubon Ballroom in Harlem, thugs from the organization to which Malcolm committed his adult life—thugs whose frame of mind he did as much as anyone to shape—filled him with bullets. Such was the determination of his fellow black Muslims— not the United States government—to avenge “the Honorable” Elijah Muhammad that even the knowledge that Malcolm’s pregnant wife and four little daughters were in attendance didn’t suffice to deter them.

These are just some of the ugly details that don’t make the cut when it comes to the mythology surrounding Malcolm X.