Elliot Rodger and the Left 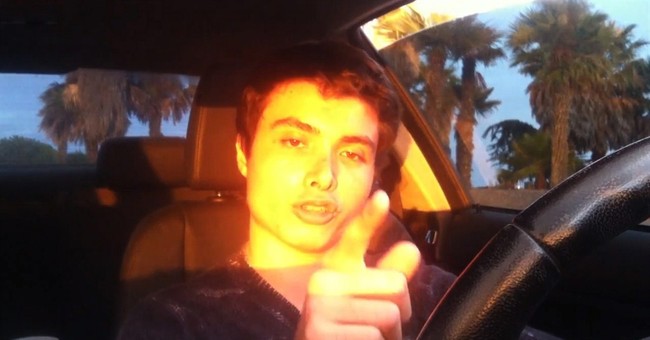 Since California mass murderer, Elliot Rodger, knifed to death as many people as he shot to death, consistency demands of those on the left that they call just as loudly for “knife control” as they call for “gun control.” Yet logic can be relentless, and in this case, it demands even more.

Rodger was nothing if not a young man drowning in envy, envy of the “beautiful,” “the rich,” and “wealthy.” If we need “gun control” because “guns kill,” then, as the case of Rodger makes painfully clear, envy kills.

Regarding a concert that he once attended, Rodger wrote that he “couldn’t help but feel a bitter form of envy at [of] all of the rich kids” in attendance. “They grew up in lavish mansions, indulged in excessive opulence, and will never have to worry about anything in their pleasurable, hedonistic lives.” Rodger admitted that he “would take great pleasure in watching all of those rich families burn alive,” for he “hated and envied all of those kids for being born into wealth [.]”

This analogy can be pushed yet further along. The grieving father of one of Rodger’s victims, Richard Martinez, initiated a rallying cry—“Not one more!”—as he insisted that his son, Chris, is dead today because of “gun rights”-totting politicians and the National Rifle Association. But if it is envy that is at least as much if not more responsible for the death of Chris Martinez than is some gun, then it is at envy-totting politicians and their accomplices in academia and the media that “Not one more!” sloganeering should be aimed.
CARTOONS | Michael Ramirez
View Cartoon

And there is no politician guiltier than the President himself of promoting this most noxious of vices, a character defect that for centuries the Christian world regarded as a “deadly sin.” As Rodger showed for all with eyes to see and ears to hear, envy is indeed deadly, and in more ways than one. Perhaps, then, Obama and his ilk should be subjected to the burdensome constraints that, in their push for greater “gun control,” they seek to foist upon the NRA and gun manufacturers and dealers.

Perhaps every politician, academic, and media commentator that attempts to stoke the embers of envy should be heavily taxed. Maybe academics in the humanities and liberal arts who are forever waxing indignant over the lack of “social justice” should be videoed as Rahm Emmanuel, Mayor of Chicago, seeks to have all (legal) gun purchasers videoed.

If those on the left were consistent, then they would be busy harping away on the underlying “root cause(s)” of Rodger’s rage. And since the underlying “root cause” of this shooting was the shooter’s conviction that it was unfair—i.e. unjust, in leftist speak—that others benefitted while he suffered from an “unequal” distribution of “social” goods like good looks, wealth, charisma, charm, sexual prowess, etc., consistent leftists should be insisting upon the passage of new laws aimed at rectifying this “social injustice.”

It may surprise some readers of this column, but while no leftist politicians are (as of yet) calling for this kind of action, leftist academics, represented by the likes of distinguished Harvard professor Ronald Dworkin, have been doing so for a long time.

According to Dworkin, there is no justice in the absence of an equal distribution of both “impersonal” resources—material possessions or “properties”—and what he calls “personal” resources, meaning mental and physical attributes. We can determine whether there is justice by applying “the envy test.” Dworkin writes that if one person “envies the resource-set of another person,” then “he would prefer that resource-set to his own, and would therefore trade his own for it.” If, however, “no member of the community envies the total set of resources [of] any other member,” then “equality is perfect” and, hence, there is justice.

Even if no one envies the material possessions (the “impersonal resources”) of others, as long as there is an “unequal” distribution of “personal resources,” there is injustice. Thus, there must be “compensatory strategies to repair…inequalities in personal resources and luck.” Dworkin adds that these “programs” can be “modeled on hypothetical insurance markets” and “financed by general taxation.”

That these “compensatory strategies” threaten to undermine liberty is of no consequence, for “invasions of liberties” are justified if they are “necessary to protect an egalitarian distribution of resources and opportunities.”

Here we have it. By leftist reasoning, Elliot Rodger, no less than his victims, was himself a victim of society. Had there been “an egalitarian distribution of resources and opportunities”—true justice—then Rodger would have been envy-free and his victims would be alive today.

No leftist politician or popular commentator would think to spout this nonsense aloud. But the rest of us should know that, as leftist academics like Dworkin inform us, it is precisely this nonsense to which leftist reasoning leads.