A Letter to my Grandchildren 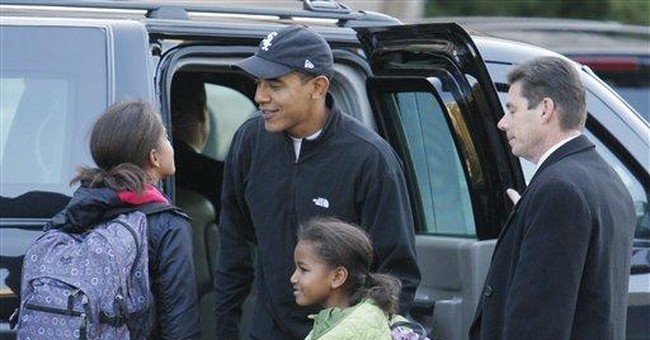 Dear Kemp grandchildren -- all 17 of you, spread out from the East Coast to the West Coast, and from Wheaton College in Illinois, to Wake Forest University in North Carolina:

My first thought last week upon learning that a 47-year-old African-American Democrat had won the presidency was, "Is this a great country or not?"

You may have expected your grandfather to be disappointed that his friend John McCain lost (and I was), but there's a difference between disappointment over a lost election and the historical perspective of a monumental event in the life of our nation.

Let me explain. First of all, the election was free, fair and transformational, in terms of our democracy and given the history of race relations in our nation.

What do I mean?

Just think, a little over 40 years ago, blacks in America had trouble even voting in our country, much less thinking about running for the highest office in the land.

A little over 40 years ago, in some parts of America, blacks couldn't eat, sleep or even get a drink of water using facilities available to everyone else in the public sphere.

We are celebrating, this year, the 40th anniversary of our Fair Housing Laws, which helped put an end to the blatant racism and prejudice against blacks in rental housing and homeownership opportunities.

I remember quarterbacking the old San Diego Chargers and playing for the AFL championship in Houston. My father sat on the 50-yard line, while my co-captain's father, who happened to be black, had to sit in a small, roped-off section of the end zone. Today, we can't imagine the NFL without the amazing contributions of blacks at every level of this great enterprise.

I could go on and on, but just imagine that in the face of all these indignities and deprivations, Dr. Martin Luther King could say 44 years ago, "I have an abiding faith in America and an audacious faith in mankind." He described his vision for America, even as he and his people were being denied their God-given human rights guaranteed under our Constitution.

You see, real leadership is not just seeing the realities of what we are temporarily faced with, but seeing the possibilities and potential that can be realized by lifting up peoples' vision of what they can be.

When President-elect Obama quoted Abraham Lincoln on the night of his election, he was acknowledging the transcendent qualities of vision and leadership that are always present, but often overlooked and neglected by pettiness, partisanship and petulance. As president, I believe Barack Obama can help lift us out of a narrow view of America into the ultimate vision of an America where, if you're born to be a mezzo-soprano or a master carpenter, nothing stands in your way of realizing your God-given potential.

Both Obama in his Chicago speech, and McCain in his marvelous concession speech, rose to this historic occasion by celebrating the things that unite us irrespective of our political party, our race or our socio-economic background.

My advice for you all is to understand that unity for our nation doesn't require uniformity or unanimity; it does require putting the good of our people ahead of what's good for mere political or personal advantage.

The party of Lincoln, (i.e., the GOP), needs to rethink and revisit its historic roots as a party of emancipation, liberation, civil rights and equality of opportunity for all. On the other hand, the party of Franklin Roosevelt, John Kennedy and now Obama must put forth an agenda that understands that getting American growing again will require both Keynesian and classical incentive-oriented (supply-side) economic ideas. But there's time for political and economic advice in a later column (or two).

Let me end with an equally great historical irony of this election. Next year, as Obama is sworn in as our 44th president, we will celebrate the 200th anniversary of Abraham Lincoln's birth. I'm serving, along with former Rep. Bill Gray of Pennsylvania, on the Abraham Lincoln Bicentennial Board to help raise funds for this historic occasion. President-elect Obama's honoring of Lincoln in many of his speeches reminds us of how vital it is to elevate these ideas and ideals to our nation's consciousness and inculcate his principles at a time of such great challenges and even greater opportunities.

In fact, we kick off the Lincoln bicentennial celebration on Wednesday, Nov. 19, in Gettysburg, Pa. The great filmmaker Ken Burns will speak at the Soldier's National Cemetery on the 145th anniversary of Lincoln's Gettysburg Address. On Thursday, Nov. 20, at Gettysburg College, we will have the first of 10 town hall forums, titled "Race, Freedom and Equality of Opportunity." I have the high honor of joining Rep. Jesse Jackson Jr., Professor Allen Guezlo and Norman Bristol-Colon on the panel, with Professor Charles Branham as the moderator.

President-elect Obama talks of Abraham Lincoln's view of our nation as an "unfinished work." Well, isn't that equally true of all of us? Therefore let all of us strive to help him be a successful president, so as to help make America an even greater nation.