Jackie Gingrich Cushman
|
Posted: Nov 21, 2019 12:01 AM
Share   Tweet
The opinions expressed by columnists are their own and do not necessarily represent the views of Townhall.com. 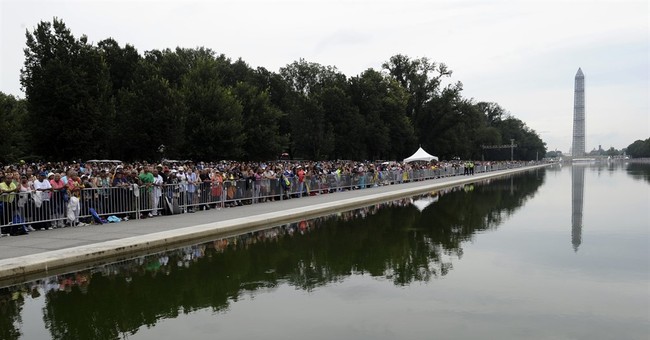 The political world is mired in must-watch political impeachment theater in Washington, with a second focus on this week's Democratic presidential primary debate in Atlanta.

But with those two sideshows going, the world continues to spin. People get up and go to work; students go to school; mothers and fathers care for their children; people go to church and volunteer in their communities. This has led me to think about the incredible resilience of our government, and how thankful I am that I was born in our great nation.

I love the vastness of our country, the different topographies, the different weather patterns, communities and cultures. I love the freedom we have to travel between states, to speak our minds, to bear arms, to practice religion, to work whatever job we want in whatever location we want. I love the freedom to vote for our government and to protest when we disagree with those who are in power. I love that we are the most welcoming country in the world, that we stand up for human rights violations and that we desire to be the shining light upon the hill.

We are unique among nations. We were founded with the understanding that our rights come from God to us, as individuals, and that we loan power to the government. We are a nation of adventure seekers, creators and entrepreneurs. We work best as a nation when our citizens are working, and today we have a booming economy that brings with it business opportunity.

But the freedoms we enjoy were earned through the American Revolution, the American Civil War, World Wars I and II and the numerous other conflicts our military engages in on an ongoing basis to keep us free. It takes only a cursory look at international news to understand that our freedoms are not enjoyed by many. The protests in Hong Kong, the chaos in Venezuela, the dictatorship in North Korea are all examples of government structures that lead to oppression and loss of freedom.

Our founders not only declared our rights to be God-given but also understood the impact of "divine providence." President George Washington led us through the Revolutionary War and survived the French and Indian War, despite having had two horses shot out from under him and four bullets pierce his clothes. It is doubtful that we could have won our freedom without Washington.

President Abraham Lincoln, who shepherded our nation through the Civil War, understood that he was an instrument in the hand of God. He delivered the Gettysburg Address on Nov. 19, 1863, to dedicate the battlefield where over 50,000 soldiers had been killed, wounded, captured or reported missing.

In the speech, which runs about 278 words, Lincoln never said "I" or "me"; instead, he took his audience from the past to the present and laid down a challenge: "that this nation, under God, shall have a new birth of freedom -- and that government of the people, by the people, for the people, shall not perish from the earth."

We withstood the terrorist attacks of Sept. 11, 2001, and still work today to secure our individual freedoms through the political process. While we are not a perfect nation, we are the best nation on Earth. However, Lincoln had it right, as did President John F Kennedy who said, "And so, my fellow Americans, ask not what your country can do for you; ask what you can do for your country."

This is not only a request to simply show up and vote but also a challenge for us to get involved in our local communities, to work together to solve problems and to speak highly of our nation. While this requires extra work, it's worth it.

I've been involved in nonprofit community groups for over two decades. This experience "has framed my belief that limited government is most effective and that solutions emerge when people, communities, corporations, and foundations come together and work together," I wrote in "Our Broken America: Why Both Sides Need to Stop Ranting and Start Listening."

While Democrats often talk about the need for government solutions, "government is neither efficient nor effective; and when government attempts to overcome its inefficiencies, it does so by taking away people's freedoms. It's a trade not worth making," I wrote. "Give me my freedom and a relatively inefficient government."

Yes, there is political drama all around us, and I am still incredibly grateful to be an American. Now let's get to work.