Jackie Gingrich Cushman
|
Posted: Oct 17, 2019 12:01 AM
Share   Tweet
The opinions expressed by columnists are their own and do not necessarily represent the views of Townhall.com. 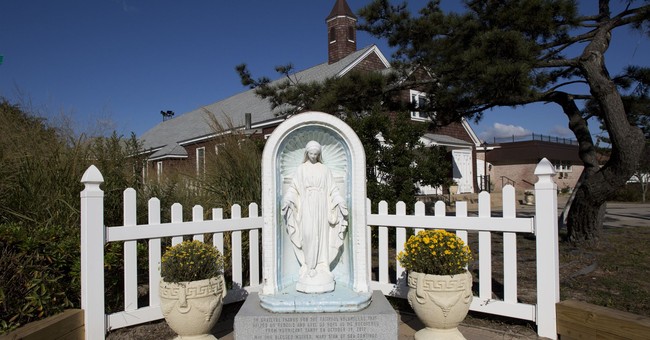 While I agree with most sociologists that the societal shift we have seen in recent years toward more urbanism and secularism will continue, at least in the short term, I am writing to tell you about other changes that have gotten far less attention: moves toward more community and more faith.

I believe that these changes are good for our nation because they provide us with stability, optimism and a higher quality of life. They are also a boon for the Republican Party.

This past weekend, I attended a Hillsong Church service in Manhattan. I arrived a few minutes before the start of the 10 a.m. service -- one of many that day -- and joined the long queue of worshipers waiting to get into the building. It was not a traditional church but an entertainment venue. Instead of permanent signs, there were pop-up signs and a host of volunteers. The line moved rapidly, the signs were clear and easy to understand and the volunteers were helpful and smiling, greeting us with, "Welcome home."

To get to our seats, we walked up some six to eight flights of stairs. At each landing, volunteers guided us up to the next level (as other worshipers had already filled the ballrooms on the lower floors).

When I reached a ballroom that still had some space available, I found a seat on the balcony at the back. Musicians were playing contemporary worship music while the audience sang along with them. The lighting was reminiscent of a rock concert, and lyrics were displayed behind the stage so newcomers like myself could sing along, which I did.

This was a very different religious service than any that might have occurred in 1960, when 98% of Americans identified with a particular religion, according to Gallup Research. Two years ago, those identifying as Protestant had dropped to 38%, with 20% of all Americans -- 65 million people -- citing no religious affiliation, a tenfold increase from 2% in 1960.

While our identification with a specific religion has declined as a nation, we still overwhelmingly (87%) believe in God, according to Gallup. And, while we are surrounded by pressures -- political, social, environmental, economic -- many of us (49%) believe "religion can answer all or most of today's problems."

I believe that our country is ready for a religious revival. What I saw this past Sunday was people hungry for human connection and God's grace in a setting outside the traditional religious institutions. Although the internet connection between our Manhattan location and the New Jersey service failed Sunday, in the near future, due to rapidly changing technology, the connection will not only happen between these two locations but among hundreds if not thousands throughout our country.

This will change as information networks and connectivity increase and technology infrastructure reaches into more rural areas. People will be able to move to rural areas, and young adults will be able to stay there without missing out on economic opportunities. Already, many young families are trading the harried and hurried life common among urbanites for the more manageable rural life, which typically allows for more family time and leisure.

Those who make this transition will find they have more time to pay attention to civic matters. It's easy when living in a big city to assume that someone else will take care of the business of governing. Having grown up in a small community (Carrollton, Georgia, which had population of about 14,000 during my childhood), I can tell you with authority that it was evident to me -- even as a child -- that everyone needed to pitch in and help in one way or another.

This close connection with community alleviates one of the main drivers of political polarization: political/social isolation. Today, 55% of Republicans and 64% of Democrats say they have few or no friends in the opposite party. For city dwellers, it's easy to self-segregate by political party; for rural residents, that's nearly impossible.

While others may look toward the future and see gloom and despair, I see an opportunity for our nation to become both more faithful and more focused on community.

For Republicans in particular, this could be an enormous opportunity. But Republicans must, like Hillsong Church, extend a warm welcome to everyone and guide them to their seats.

This cannot be accomplished by following old patterns of behavior. Instead, we must reach out and welcome everyone -- especially those who have different ideas and perspectives. It's in the act of welcoming that the transformation can occur.