Jackie Gingrich Cushman
|
Posted: Sep 20, 2018 12:01 AM
Share   Tweet
The opinions expressed by columnists are their own and do not necessarily represent the views of Townhall.com. 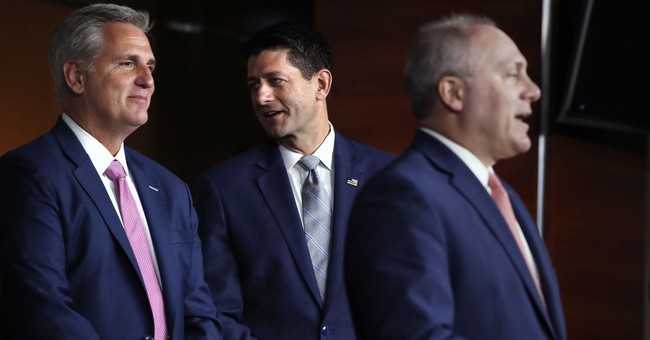 With less than two months to go, the midterm elections are quickly approaching, madness ensuing. In politics, as an election date nears, activity grows more frantic and frenzied. Often, candidates who trail for months can overtake the front-runner in the last few days. Breaking news can create a wave for or against a candidate or party, and that can swing an election's outcome.

The framework for this midterm election is a mixed bag. Items that help Republicans: control of the House and narrow control of the Senate; a strong economy; Democrats' having voted against the tax cut bill (which has been successful). And many Democrats are outspoken against Immigration and Customs Enforcement, a losing issue with the overall electorate.

Items that push the other way: Speaker Paul Ryan, R-Wis., is not running for re-election; President Donald Trump is a lightening rod; and the current confirmation process for Brett Kavanaugh has turned into a rapidly moving soap opera.

Let's start with the economy. According to an article for The Washington Post by Heather Long titled "U.S. wages growing at fastest rate in 9 years as unemployment stays at 3.9 percent," "hiring picked up in August, and so did worker pay -- registering the fastest wage growth since 2009 in an encouraging sign that wages may finally be moving higher after years of sluggish gains.

"August was the 95th straight month the U.S. economy added jobs, with a robust 201,000 job gains, the Labor Department reported Friday," Long writes, "while wages for U.S. workers grew at 2.9 percent in the past year. The national unemployment rate remained at 3.9 percent, one of the lowest levels in half a century."

A strong economy would normally bode well for the party in power. America works best when Americans are working. However, popularity of the president also factors into the equation.

Jeffrey Jones wrote last week for Gallup, "Midterm Seat Loss Averages 37 for Unpopular Presidents." In the article, he lays out the rational for expecting a loss of House and Senate seats for Republicans in November.

This loss for midterm elections is true for both parties: "Barack Obama and the Democrats lost just 13 seats in 2014," says Jones, "but that was four years after they lost a post-World War II high of 63 seats in 2010."

While President Donald Trump has been talking about a red wave during campaign rallies, a recent "private survey conducted for the Republican National Committee and obtained by Bloomberg Businessweek contains alarming news for Republicans hoping to hold onto control of Congress in November," writes Joshua Green in "Internal RNC Poll: Complacent Trump Voters May Cost GOP Control of Congress" for Businessweek. "Most Trump supporters don't believe there's a threat that Democrats will win back the House," writes Green. "President Trump's boasts that a 'red wave' could increase Republican majorities appear to have lulled GOP voters into complacency, raising the question of whether they'll turn up at the polls."

If Republicans don't turn out, they lose. While those who approve of Trump, both personally and from a policy standpoint will turn out, "the study says GOP fortunes will hinge on the party's ability to activate "soft" supporters," writes Green. Soft supporters approve of policy results -- but not style.

The next layer is Kavanaugh's nomination process. On Sept. 19, Siobhan Hughes wrote "Supreme Court Fight has Uncertain Impact," for the Wall Street Journal:

Democrats will attempt to use the nomination fight as a means to push women away from Trump and Republicans, thereby leveraging the gender gap that is already there. "In an August Wall Street Journal/NBC News poll, Mr. Trump was up nine points among men who had registered to vote, with 53 percent approving compared with 44 percent who disapproved," writes Hughes. "But he was down 17 points among women, with 40 percent of registered voters approving, compared with 57 percent who disapproved."

As noted before, anything can happen before midterms. My expectation is that things will change. Sit back and watch the midterm madness unfold.