Jackie Gingrich Cushman
|
Posted: Apr 05, 2018 12:01 AM
Share   Tweet
The opinions expressed by columnists are their own and do not necessarily represent the views of Townhall.com. 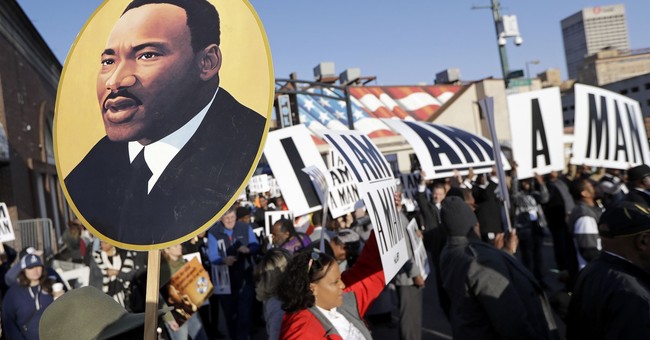 This week includes Easter as well as the 50th anniversary of the assassination of the Reverend Martin Luther King, Jr. On Easter, we celebrate the resurrection of Jesus Christ. On this anniversary, we reflect on King's message, work and legacy. Recognizing both in the same week has led to additional reflection.

My takeaway? Don't worry, be happy and focus on others while doing God's will. Understand that, even in the darkest of times, there is hope, light and an opportunity to make progress. All people are God's children -- even those who disagree with you.

Growing up in rural Georgia, my clearest memory of Easter involves a sunrise service on a mountaintop. Our family of four had driven over an hour to the service, my sister Kathy and I attempting to sleep in the back of the car. My guess is this was held near Callaway Gardens, a resort located an hour outside Atlanta.

The woods surrounded us, and the view was of the valley below. Azaleas were in bloom, and the trees were bright green. As the sun rose, fog came up from the ground, nearly obscuring the cross behind the altar. The area surrounding the cross was both hazy and bright: hazy from the fog, bright from the sun. As the sun rose and burned off the fog, the cross became clearer and the colors of the flowers and trees appeared brighter. The contrast of the cross, the symbol of Jesus' death, and the new growth of the trees and flowers, was stark at the time, but seems to be a perfect juxtaposition to me now, as I recall that morning many years later.

So it is with Easter. The sadness of Jesus' death, symbolized by the cross, juxtaposed against his resurrection and the joy of receiving God's gift of eternal life.

King, a Baptist minister, often quoted from the Bible and used biblical references when speaking. His delivery was shaped by his time in church, both in the congregation and in the pulpit. He used his voice as well as his words to connect with and inspire people. He was a masterful orator.

Only 39 at the time of his murder, he accomplished so much in an all-too-short life. Handsome, dignified and determined -- he moved forward when others gave up. He gave hope to those who heard his words, even when he was exhausted. He not only dreamed, but also articulated a better future for our country.

The night before King's murder in Memphis, he gave his last speech, in support of the sanitation workers' strike. He was glad to have been born when he was, even though "the world is all messed up," he said that night. He gave this explanation for his presence there: "We aren't engaged in any negative protest and in any negative arguments with anybody," he said. "We are saying that we are determined to be men. We are determined to be people. We are saying -- We are saying that we are God's children."

In his speech that night, King also invoked the Good Samaritan parable from Jesus, asking those who were listening to help others. He said that they should focus on those who needed help, rather than on themselves.

In closing, King referred to concerns others had expressed for his safety, while he was seemingly unconcerned for himself.

"It really doesn't matter with me now, because I've been to the mountaintop. And I don't mind. I just want to do God's will," he said. "And He's allowed me to go up to the mountain. And I've looked over. And I've seen the Promised Land. I may not get there with you. But I want you to know tonight, that we, as a people, will get to the promised land!

"And so I'm happy, tonight. I'm not worried about anything. I'm not fearing any man. Mine eyes have seen the glory of the coming of the Lord."

The next day he was assassinated. His work not yet complete.

This week, reflect on Easter, the coming of the risen Lord. Also reflect on how we together can do God's will, and make sure that everyone understands that all of us are God's children.