Jackie Gingrich Cushman
|
Posted: Dec 14, 2017 12:01 AM
Share   Tweet
The opinions expressed by columnists are their own and do not necessarily represent the views of Townhall.com. 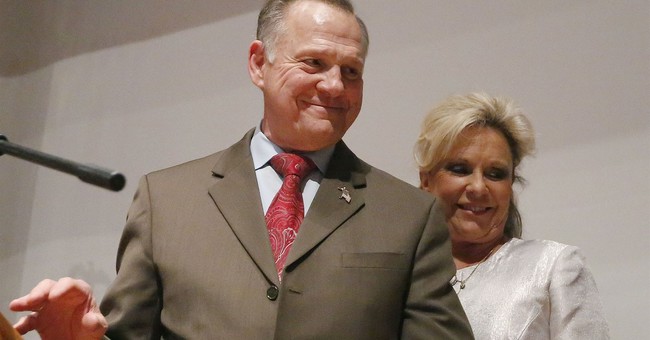 While Democrats are crowing about their victory in the Alabama Senate race, now is the time for potential long-term gain for Republicans. The Alabama special election for senator was held this week, with Democratic candidate Doug Jones beating Republican Roy Moore.

In the Republican primary, Moore had beaten a more moderate candidate, Sen. Luther Strange, who had been appointed by then-Gov. Robert Bentley.

Moore, a far-right conservative, was plagued with allegations of sexual impropriety during the campaign. His flair for the theatrical was evident to the end as he rode to the polls Tuesday astride a horse, wearing a western hat and boots.

Yes, this is real life.

President Trump had initially backed Strange in the primary. When Strange lost, the president initially held back from wading into the special election. But he changed course a little over a week before the election, endorsing Moore.

Senate Majority Leader Mitch McConnell refused to endorse Moore, even though the Republican lead in the Senate was slim -- and is now even slimmer. With Moore's loss in Alabama, McConnell will have only 51 Republicans in his camp versus 49 for the Democrats.

Clearly, Bannon was wrong, and Trump might think twice before taking his advice in the future.

While many (including Johnson above) will reflect on Trump's possible role in affecting the outcome, there are many lessons to be learned:

It matters who the nominee of a party is -- on both sides. On the morning after the election, Matt Drudge said that Strange would have won against Jones. We may never know for certain, but there is certainly a persuasive argument to be made. While Alabama is normally a reliable Republican-voting state, it has its limits -- Tuesday's vote showed that even a terrible Republican candidate can lose in Alabama.

Compare Moore's loss to what happened in the 2016 presidential election. While Trump did appeal to numerous voters, the Democratic primary promoted a flawed candidate in Hillary Clinton. Possibly former Vice President Joe Biden is not the only person who wakes up every day wondering if the outcome would have been different if he had been the Democrats' nominee. People vote both for candidates and against candidates.

African-Americans and all other minority groups are important and will be more important in future elections. According to the Atlantic article, "African American Voters Made Doug Jones a U.S. Senator in Alabama," by Vann Newkirk II, the turnout among blacks in Alabama made a difference. "By all accounts, black turnout exceeded expectations, perhaps even passing previous off-year results. Energy was not a problem."

Of these voters, "Fully 96 percent of African Americans supported Jones, similar to President Obama's 95 percent support among this group in 2012."

Neither party can count on race alone to determine how votes are cast. For example, there was a difference in the voting patterns of white voters.

"Jones fared much better than Obama among white voters, garnering 30 percent of their votes, twice the 15 percent who voted for Obama," according to Dan Balz in the Washington Post article, "In Alabama, no good outcomes for the Republican Party." "Jones made particularly large gains among white women and those with college degrees."

Tuesday's outcome could prove to be a short-term loss but a long-term gain for the Republican party if its leaders learn from Moore's failure that they have to reach out to all voters. That means they have to field candidates who can appeal to voters not only in the primary, but also in the general election.