Reach for The Rings

Jackie Gingrich Cushman
|
Posted: Aug 11, 2016 12:01 AM
Share   Tweet
The opinions expressed by columnists are their own and do not necessarily represent the views of Townhall.com. 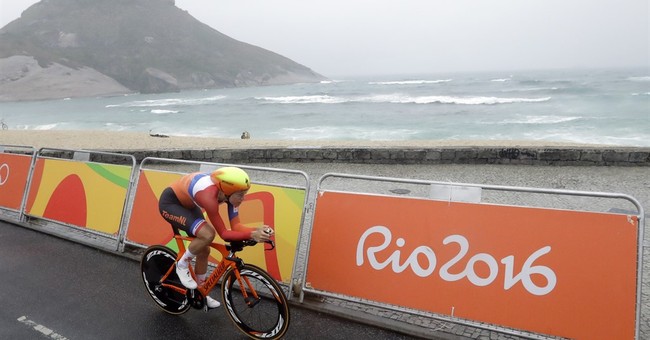 Trending
This week, the Summer Olympics provide an opportunity to turn from political and other news to focus on stories and accomplishments that occur only every four years. During the course of the Olympics, NBC Universal will provide 6,755 hours (that's more than 281 days) of programming.

If watched continuously, this Olympic coverage would get viewers past the presidential election. That might please those who are wistfully wishing the elections to be over.

The ancient Olympic Games, held in Athens, Greece, were held from approximately 776 B.C. to 400 A.D. During the games, there would be a truce between warring parties and any free man could compete in the competition of his choice. Events then were focused on physical prowess and fighting skills. As the Roman Empire grew in power and influence, the Olympic Games ceased.

For centuries, the world went without a global athletic competition.

In the late 1800s, Pierre de Coubertin began to focus on the importance of athleticism in education. As a young man in France during the Franco-Prussian war, Coubertin blamed the defeat of the French on their lack of physical prowess. Noting during a visit to England that "organized sport can create moral and social strength," Coubertin went on to champion the incorporation of physical education in school curricula. This passion led him to champion the creation of the modern Olympic Games.

So far, the United States is ahead on the medal count, but the interesting stories are found in the individual athletes. Gymnast Gabby Douglas, who wowed the world in the 2012 Olympics and won the individual all-around gold medal, returned as part of the women's team. She participated in only one of the four events, the uneven bar. Her composure must have been a soothing presence for her newer teammates; they won the team gold medal. The new women's gymnastic star is Simone Biles, who participated in all four team events, and produced the best vault, beam and floor routines of the day. Biles, along with Ally Raisman, will be competing in the all-around individual competition.

At 4 feet 8 inches tall, Biles is 2 feet shorter than volleyball player David Lee. The two athletes took a selfie to provide a visual, and sent it into the twittersphere. Biles was raised by her grandfather and his wife, who adopted her when she was six. Biles refers to them as her mom and dad. Biles said of her mom, "She always told me that although I am small; that doesn't limit my power or define me. For me, I don't think about size -- I focus more on being powerful and confident."

This week, Michael Phelps won his 21st Olympic gold medal (25th total medal), and beat rival Chad le Clos in the 200-meter butterfly. Before the event's semifinals, Le Clos had gone through an air-boxing routine in front of a seated, glaring Phelps. The glare was caught in a photo and quickly became a viral meme. The photo of le Clos looking at Phelps during the final race, as Phelps was pulling ahead, marks a fascinating contrast. Phelps focused his eyes only forward toward the wall in front of him for the win.

In women's swimming, 19-year-old Katie Ledecky left her competitors in her wake, winning the 200- and 400-meter freestyle events. In the 400-meter, she finished 5 seconds, a lifetime in swimming, ahead of the rest of the pack. Ledecky won with a huge smile, providing joy to the millions of spectators.

Those of us seated in front of our TVs around the world don't see the years, the decades of training, sacrifice and preparation that Olympic athletes put in before their competition. We only see the results. But that does not mean we can't learn from them. Possibly we could emulate some of their Olympic traits, poise and composure, focus on the goal in front of us and pure joy when we come out on top - while also remembering to focus on being powerful and confident.