Jackie Gingrich Cushman
|
Posted: Jul 28, 2016 12:01 AM
Share   Tweet
The opinions expressed by columnists are their own and do not necessarily represent the views of Townhall.com. 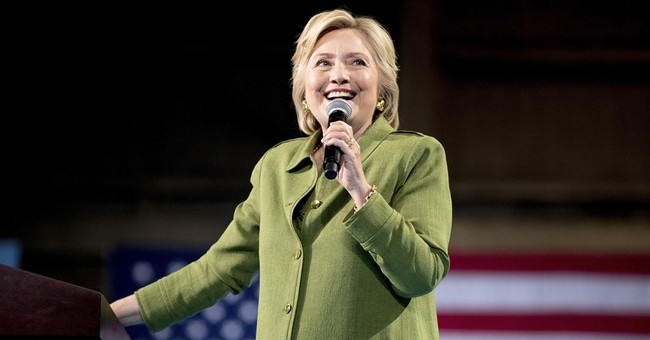 Trending
The Democratic National Convention's attempt to focus this week on party unity was almost overwhelmed even before the coronation process in Philadelphia got underway.

Wikileaks' massive dump of emails provided the world with a glimpse behind the curtain of the operations at the DNC. Some of the emails revealed a bias against Sen. Bernie Sanders, and several showed that the organization was seeking to influence media outlets to favor her over her opponent, Sen. Bernie Sanders.

Debbie Wasserman Schultz, head of the DNC, announced that she would resign after the convention, but planned on gaveling in the start of the program. But, after being greeted Monday by boos from people attending her own state's breakfast, Wasserman Schultz decided not to take on a public role during the convention.

Amid such a lack of party unity, convention organizers must have welcomed first lady Michelle Obama's speech Monday night. Poised, passionate and articulate, she offered a full-throated endorsement of Clinton. "I am here tonight," she said, "because in this election there is only one person who I trust with that responsibility, only one person who I believe is truly qualified to be president of the United States, and that is our friend Hillary Clinton ... she never buckles under pressure. She never takes the easy way out. And Hillary Clinton has never quit on anything in her life."

In an attempt to contrast Clinton with Republican nominee Donald Trump, the first lady noted, "I want a president with a record of public service, someone whose life's work shows our children that we don't chase form and fortune for ourselves." How this meshes with the Clintons' net worth of $45 million (according to Forbes) built over a lifetime of public service is perplexing.

Explainer-in-Chief Bill Clinton spoke Tuesday night in an effort to recast and redefine his wife. He began his speech looking back 45 years: "In the spring of 1971, I met a girl." Yes, the girl" was Hillary Rodham. Bill Clinton then listed her activities and affiliations over the years -- a listing that one might expect to find on Wikipedia more than in a testimony to her humanness and warmth from her husband.

"For this time," he said, "Hillary is uniquely qualified to seize the opportunities and reduce the risks we face. And she is still the best darn change-maker I have ever known ... Hillary will make us stronger together. You know it because she's spent a lifetime doing it."

The former president's reintroduction of his wife to the nation was masterful, and might explain how he has raked in more than $100 million in speaker fees, (one in 2013 for a publishing company in Lagos, Nigeria, where he was paid $700,000) since leaving office, but it might not have been masterful enough to recast Hillary's public persona created over decades in the public eye.

According to a CNN/ORC poll released Monday, 68 percent of likely voters say Hillary Clinton is neither honest nor trustworthy, (1,001 adults, July 22-24, +/- 3 points).

While Hillary Clinton's pronouncement Tuesday night that "I can't believe we just put the biggest crack in that glass ceiling yet," might be true, even House Minority Leader Nancy Pelosi (D-Calif.) acknowledged the limits this might have in garnering votes. On Tuesday, Pelosi told Politico, "I don't think that any woman should be asked to vote for someone because she's a woman, and that -- because the candidate is a woman."

In a thinly veiled attempt to provide the former senator from New York with campaign advice, Pelosi continued, "When I was running for leadership, the last thing I would say to my whips [was], 'Do not ever say to anybody it's time for us to have a woman in the leadership, because that's the least important selling point.'"

She continued, "In terms of Hillary Clinton and this election, I think that the attitude that ... you should vote for her because she's a woman and you're a woman is not a good selling point. And I think that turns some people off."

As the week plays out, and the convention plays on, it will be interesting to see if President Obama can provide Clinton's campaign with the enthusiasm and excitement it will need to carry his administration to a third term, or if Clinton can effectively recast herself during her acceptance speech Thursday night.

Perhaps because she has spent decades in the public eye, many people think they know her well. That well-documented record could make her latest goal the most challenging one she has faced -- changing people's understanding and beliefs about who is Hillary Clinton.