Jackie Gingrich Cushman
|
Posted: Jul 14, 2016 12:01 AM
Share   Tweet
The opinions expressed by columnists are their own and do not necessarily represent the views of Townhall.com. 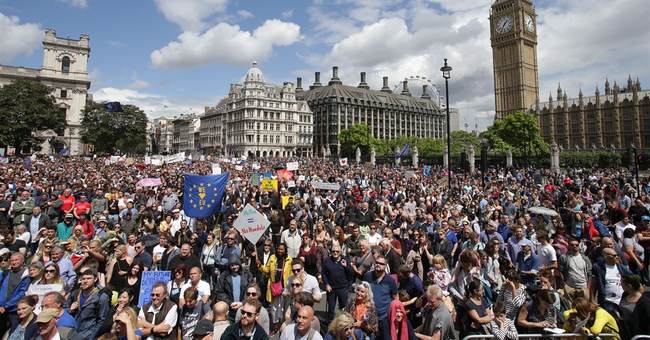 Trending
While we in the United States are in the midst of a seemingly never-ending presidential race, Britain has managed to pick a new Prime Minister in under a month.

We may be able to learn some lessons from the Brits.

David Cameron announced on June 24, after losing the European Union referendum, that he would resign. On July 11, Theresa May won the position of Conservative Party leader, and on July 13 she was invited by Queen Elizabeth to form a government.

This less-than-three-week transition is the result of a much different process than the one we have in the United States. The tenure of a British prime minister is not predetermined by the calendar, but is based instead on whether the leader of the majority party in power (or coalition) has the support of the House of Commons.

Cameron, who had championed staying in the European Union, lost political power when 52 percent of the voters chose to leave the European Union. The transition to a new prime minister ended abruptly this week when one of the remaining contenders, Andrea Leadsom, energy minister and vocal Brexit supporter, pulled out of the race.

May, who served as home secretary under Cameron, has also served as minister for women and equalities and shadow secretary of state for work and pensions. She began her tenure as a member of Parliament in 1997.

"My whole philosophy is about doing, not talking. I've always championed women in politics," May noted in a recent interview "Politics isn't a game, the decisions we make affect people's lives and that is something we must all keep to the forefront of our minds."

On July 11, in a speech to the Conservative Party, May stood before a podium on which a sign stated her position, "A country that works for everyone, not just the privileged few." The daughter of a vicar, her social pedigree is more mainstream and middle class than upper crust.

May was determined and forceful in her appeal to become leader of the Conservative Party, focusing on unity, prosperity for everyone and transitioning from the EU. She acknowledged that the referendum, which led to her taking power, would be carried out by the government -- even if she was not a supporter. "Bretix means Brexit and we are going to make a success of it. There will be no attempts to remain inside the EU," May said.

Turning toward her goal of creating a country that will work for everyone, May noted, "We need a government that will deliver serious social reform -- and make ours a country that truly works for everyone. Because right now, if you're born poor, you will die on average nine years earlier than others. If you're black, you're treated more harshly by the criminal justice system than if you're white. If you're a white, working-class boy, you're less likely than anybody else to go to university. If you're at a state school, you're less likely to reach the top professions than if you're educated privately. If you're a woman, you still earn less than a man. If you suffer from mental-health problems, there's too often not enough help to hand. If you're young you'll find it harder than ever before to own your own home."

May, known for her work ethic and focus on getting things done, might be just the person to unite her nation. In 2002, she challenged her party to reform. "Our base is too narrow and so, occasionally, are our sympathies. You know what some people call us - the nasty party... We need to reach out to all areas of our society ... how can we truly claim to be the party of Britain, when we don't truly represent Britain in our party?"

Like former Prime Minister Margaret Thatcher, May was clear on what is conservatism and what is not.

"Our party is at its best when it takes Conservative principles and applies them to the modern world. It is at its worst when it tries to recreate a bygone age. We cannot bring back the past. We can work together to make today and tomorrow's world a better place."

Possibly conservatives on this side of the pond could pickup a bit from Britain's new prime minister on modernization, outreach and clear choices.