Jackie Gingrich Cushman
|
Posted: Jan 14, 2016 12:01 AM
Share   Tweet
The opinions expressed by columnists are their own and do not necessarily represent the views of Townhall.com. 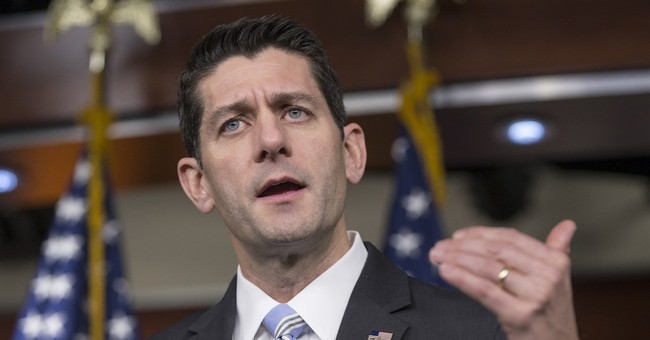 Trending
While members of the news media and Democrats paint Republicans as the party of angry old white men, the world around them is changing.

This was apparent this past Tuesday night. The person sitting on President Barack Obama's left during his final State of the Union address and the Republican governor who gave the GOP rebuttal were not angry old white men. Instead, they were Speaker of the House Paul Ryan and South Carolina Gov. Nikki Haley, leaders of the Republican Party.

They underscored that the governing Republican Party is inclusive and inspirational.

Ryan, 45, contrasted starkly with Vice President Joe Biden, 73, whose jab this week at Hillary Clinton's focus on inequality suggested that he regretted not having run for the Democratic presidential nomination.

Ryan's use of Twitter, both to choose the tie to wear and to introduce his guests, showed that he understands the importance of technology and reaching out to younger voters.

Ryan's guests for the State of the Union reflected his focus on the armed services; volunteer organizations that lift people out of poverty; and religious rights.

They included Logan Barritt, a 4-year-old boy who sent packages to armed service members, two nuns and community leaders and volunteers who work to relieve poverty and boost opportunity.

Focusing on ideas and issues, Ryan has systematically and in a disciplined way kept himself out of the Republican presidential primary. He ventured Tuesday to provide advice to the entire field: Focus on issues rather than personalities.

Speaking before Obama had delivered his address, Ryan reflected, "My assumption is he will do everything he can to bait us into fights with him to try to make us look like we're angry reactionaries incapable of winning the Electoral College."

The GOP choice to deliver the rebuttal was Haley, 43, whose parents emigrated from India. While she spoke with a soft, lilting, Southern drawl, her rhetoric was inclusive and optimistic, clearly outlining how a Republican president would differ from Obama.

"Taxes would be lower for working families, and we'd put the brakes on runaway spending and debt," she said.

"We would encourage American innovation and success instead of demonizing them.

"We would reform education so it worked best for students, parents, and teachers.

"We would end a disastrous health care program, and replace it with reforms that lowered costs and actually let you keep your doctor.

"We would respect differences in modern families, but we would also insist on respect for religious liberty as a cornerstone of our democracy.

"We would make international agreements that were celebrated in Israel and protested in Iran, not the other way around.

"We would actually strengthen our military, so both our friends and our enemies would know that America seeks peace, but when we fight wars we win them."

Neither Haley nor Ryan took Obama's bait and turned into angry reactionaries incapable of winning the Electoral College. They were inclusive and inspirational.

Why is it important to Obama to bait the Republicans running for president? For his legacy to be complete, Obama needs the next president to be a Democrat. But that could prove difficult. The two leading candidates are so flawed that they cannot win on their own. That means the Republicans have to be driven to lose the election.

Hillary Clinton, 68, became first lady of Arkansas in 1979. Clinton went on to serve as first lady of the United States of America, United States senator and then secretary of state under Obama. After almost 40 years in the public eye, Clinton is ready to take the main stage.

Bernie Sanders, 74, a U.S. senator from Vermont who might win Iowa and New Hampshire, recently joined the Democratic Party. Since 1981, when Sanders first won office as mayor of Burlington, Vermont, he has served as a member of Congress and now serves as senator as an independent. Who would have thought a new member of the party just might win the nomination?

The two leading Democrat candidates are part of an older generation that has been wrapped up in government for decades -- no wonder Obama is attempting to bait the Republican challengers into fighting like reactionaries. It's the only way his party can win.