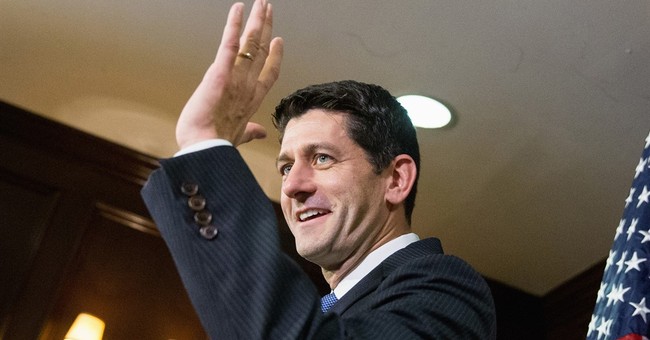 Trending
Last Thursday, Paul Ryan of Wisconsin was elected speaker of the House. At 45, he is the youngest person to get that job -- other than the only younger speaker, James G. Blaine, who was elected in 1869 when he was 39.

Ryan has shown that he is not afraid of working hard, nor is he afraid of sacrifice. His wife and three young children live in Wisconsin. He lives in Washington, where he sleeps on a cot in his office, rises at 6 am, works out and then works until 11:30 p.m. -- returning to his family, and Wisconsin, only on the weekends.

An avid deer hunter (bow no less), a Green Bay Packers fan who has run at least one marathon, Ryan has the intellect, energy and discipline to transform the House into a working establishment.

After working as a staffer on the Hill early in his career, Ryan worked for then-presidential candidate Jack Kemp as a speechwriter. Kemp, known for his big ideas and concern for the common man, was praised for his communication skills. Based on Ryan's performance so far as speaker, he appears to have learned from his former boss that words matter and good communication is key to success.

This past Sunday, his first as speaker, Ryan appeared on many of the top political Sunday shows: CBS' "Face the Nation," FOX's "Fox News Sunday," CNN's "State of the Union," ABC's "This Week," and NBC's "Meet the Press." These appearances provided a glimpse into how Ryan will lead.

Disciplined in message, Ryan stated over and over again, "We've been bold on tactics, but timid on policies and ideas."

He laid out four areas that he intends to focus on: "Number one, get that House working like it was intended to work, like the founders intended it to work; open up the process. Number two, I think it's very important that we do find common ground where we can find common ground to advance the nation's interest and do it in a way where we don't have to compromise principle, he stated on "Face the Nation."

Ryan understands that words help us understand where we are and where we might go; that where there is no vision the people perish.

"You have to raise your gauge to the horizon," Ryan said on "FOX News Sunday." "We have to show people where we're headed ... We fight over tactics because we don't have a vision. We have to have a vision and offer an alternative to this country so that they can see that if we get a chance to lead, if we get the presidency, and if we keep Congress, this is what it will look like. This is how we'll fix the problems that working families are facing."

This is the same approach used by President Ronald Reagan, the great communicator, and former Speaker Newt Gingrich during the Republican revolution. They both provided a clear contrast to what was happening and offered a better future. (Full disclosure: Gingrich is my father as well as the most recent speaker to balance the national budget).

What is interesting about Ryan is that he is pushing into traditional Democratic territory -- poverty.

"I think big government displaces what we call civil society. Big government makes it harder for communities to come together and heal problems," Ryan said on CBS News's "Face the Nation." "And so that, to me, is an incredibly important dialogue we're going to have to have in this country, which is: how do we attack the root causes of poverty? How do we deal with reintegrating displaced communities, so that people can build better lives for themselves?"

If we can have a real dialogue as a nation, and between parties, about how to fix the root causes of poverty -- and then articulate how to fix them -- we really could create a different future for ourselves and for our children.

Matt Vespa
Wait...That's All That Needed to Be Done to Expose That Fake Indian in Canada?
Matt Vespa