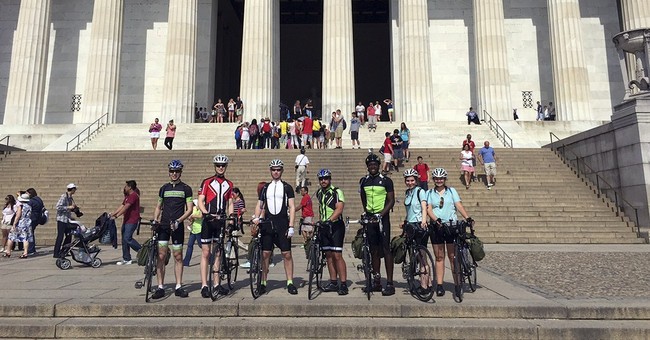 Several recent events might lead average Americans to throw up their hands in regards to politics, and possibly want to shut down Washington themselves. Take, for instance, last week's resignation by Speaker Boehner, the ongoing political reality show of the Republican presidential nomination, Hillary Clinton's never-ending email question and CNN's announcement that it would include Vice President Joe Biden for the first Democratic presidential candidates' debate, though he has not even announced.

Against this backdrop, I traveled to Washington this week, guessing that the city might depress me.

My habit while visiting Washington is to walk from the Capitol to the Lincoln Memorial and back. During the summer between my junior and senior years in college, I lived and worked in Washington.

As a bit of an introvert, well aware that I would be returning to college in a few months, I would typically read and walk during the evenings I was free rather than socialize.

My near-nightly walks began as a way to pass the time, get into better shape and enjoy the amazing scenery and atmosphere of our nation's capital city. My path took me from the Methodist Building, past the Capitol and the Washington Monument to the Lincoln Memorial, where I would climb the stairs and read the words inscribed in it before heading home. In total, it was a 5-mile trip. At first, I walked; then walked and ran; and by the end of the summer, I ran the entire loop -- stopping only at the Lincoln Memorial.

After five marathons, and numerous tennis injuries, I am no longer running that far, but I resume walking that distance -- following the same route -- whenever I return to Washington. It not only provides a great vista, but it allows me to get a different perspective of the city.

During my walk yesterday, I saw white paper bags lining the Capitol Reflecting Pool at the east end of the National Mall. The bags had candles in them and were dedicated to people touched by cancer. Organized by the American Cancer Society Cancer Action Network (ACS CAN) and titled "Lights of Hope," the display reminded me of my mother, who had cancer; my grandfather, who died of cancer; and my uncles, both of whom died of cancer. On the bags were written names and often messages and drawings. My favorite: "Best Grandpa Ever."

The practice began four years ago, with 1,200 bags surrounding the pool; last year, there were nearly 16,000 Lights of Hope. It was moving to see what people -- focused on making a difference -- could make happen by working together.

On the west lawn of the Capitol stood a group of demonstrators wearing purple shirts calling for the passage of SAFE ACT HR 1942 and HR 1214. Some waved signs, some, using a megaphone, called for safe food and protection for horses. The protesters, obviously passionate about their causes, were being active citizens and calling for their elected officials to take action.

Returning to the Lincoln Memorial, I ran into several buses of the Honor Flight Network. The veterans and their guardian volunteers were returning from visiting the National World War II Memorial and walking, or being pushed in wheelchairs, back to their buses.

Honor Flight transports veterans to Washington to visit the memorial of the war in which they served. Their mission is to honor those who have served our country. Since their formation in 2005, they have transported more than 100,000 veterans to Washington free of charge to visit their monuments. They provide not only the transportation, but also volunteers who help them walk, push their wheelchairs or just sit with them on benches, talking.

People with a passion for service to other people.

My day ended with dinner with my sister Kathy at Nagomi Izakaya, a Japanese tapas restaurant at 1990 M Street NW in Georgetown. It too reminded me of the spirit and greatness of our country. A restaurant owned and run by a family, with great food and service and a personal touch that went above and beyond. They were about to close when we walked in, but instead remained open and provided us with fabulous food and warm hospitality.

Hard work, passion for what you are doing, and a focus on serving other people -- it's what makes America great.