Republicans -- Future Versus Past 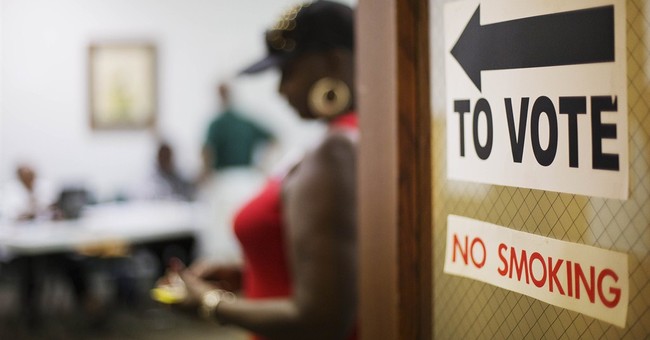 Trending
As I wrote in last week's column about Georgia's U.S. Senate race between Democrat Michelle Nunn and Republican David Perdue, it will all boil down to turnout -- who turns out to vote. While the Republican candidates are being fair when they tie the Democratic nominee to the Obama administration, they must do more than hope that Democrats can't persuade voters to go to the polls. The Republican candidates need to create and communicate a clear, compelling message for all voters -- that will give them a reason and the passion to turn out and vote Republican this fall.

The Democrats have cause for concern, according to Chris Cillizza of the Washington Post. "Here's why President Obama's dismal approval ratings matter this November," he wrote last week. "A new national Pew Research Center Poll shows why any Democrat on the ballot this November should care (about Obama's approval ratings). Roughly three in 10 people said that their vote this fall would be 'against' Obama as compared to just 19 percent who said that their vote would be to show support for the president.

"As an interesting/important question is who Obama is motivating to vote this fall. A majority (51 percent) of voters who say they are planning to vote for a Republican in their district say they mean that as a vote against Obama. Among self-identified Republicans, 55 percent say their congressional vote is meant to be against Obama; 61 percent of conservatives say the same. On the other end of the spectrum, just 36 percent say that their vote for Congress is meant as a vote for Obama. More than one in four (27 percent) of independents say their vote is against Obama; just 10 percent say it is in support of the president."

According to Cillizza, "people who see 2014 as a way to send a signal of disapproval about Obama greatly outnumber the people who want to use their vote to show their support for him and his agenda."

The 53-seat pickup by Republicans in the House of Representatives in 1994, when Democrat Bill Clinton was president and had an approval rating of 46 percent, was less because of his poor ratings than it was because of Republicans' clear, positive message.

This past week, Emily Cadei wrote "Contract With America: Ready for Redux?" in Ozy about the 20th anniversary of the Republican takeover. Former Speaker of the House Newt Gingrich, talked at the Heritage Foundation about the Contract and what it accomplished. (Full disclosure: Gingrich is my father.)

"The Contract, which candidates took to voters, included a series of specific reforms to Congress: auditing, term limits for committee chairs and opening committee meetings to the public, among others. And it detailed 10 public policies for new legislation," wrote Cadei, "including welfare reform, tax cuts and new programs to crack down on crime."

"When Republicans seized control of the House, that's exactly what they did, with the exception of a constitutional amendment to limit terms for Congress members. Not all of the policies became law, but as a political manifesto, it set the tone for Congress for much of the rest of the decade." This tone setting was important to ensure that the Republican majority had a plan to work together.

"Gingrich is worried that two decades later," Cadei wrote, "Republicans have forgotten the most important lesson of 1994, which is actually to offer the voters something."

"I am deeply opposed to any consultant or any political staffer who talks to the news media about the campaign this fall being a referendum on Obama," Gingrich said. "As a professional who's done this since 1958 ... I regard it as maniacally stupid and unprofessional to think you can get away with a purely negative campaign."

As a word of warning, Gingrich noted that, if the Republicans had "run an anti-Clinton campaign in '94, we still wouldn't be in the majority."

"The key is not right versus left, but future versus past," continued Gingrich. "We have an opportunity in the next three years to begin to become the movement of the future."

This focus on the future and on opportunity is a reflection of Gingrich's cheerful optimism. Republicans would be wise to listen to the man some might see as belonging to the past to plan for success in the future.

In the end, hope wins over fear every time.