Obama on Syria: Following from Behind 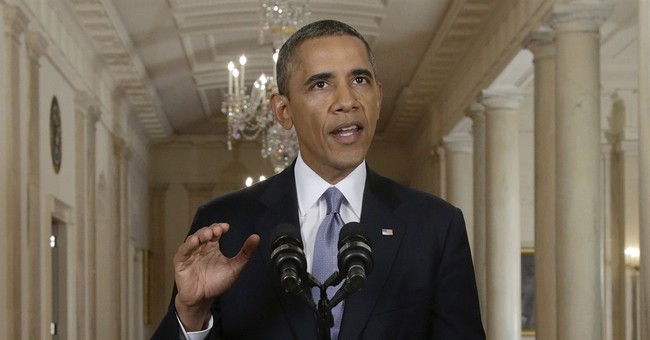 Out of the corner of my eye, as I was passing a television, I saw a plane fly into a building. The sound was not on, and I thought, it must be a small plane and a small building. An errant pilot or a plane with failing equipment that crashed when it intended to land.

It was Sept. 11, 2001, and what I had seen out of the corner of my eye were the first moments of a coordinated terrorist attack on our country. The devastation and details would hit me later. Almost 3,000 Americans died that day. We were attacked by 19 young terrorist men who were determined to die for their beliefs.

The nation was unprepared for the attack.

Since then, the world has become more fragmented and complex.

Last year, on the 11th anniversary of Sept. 11, terrorists attacked the American Consulate in Benghazi, Libya, and four Americans were killed.

The details of who knew what, when, about the Benghazi attacks are still unclear. Why was it not identified initially as a terrorist attack? Why was an Internet video initially faulted? Who in the administration knew about the attack as it was happening? What was their response? Why was the date alone not enough to lead officials to consider that it was a terrorist attack?

On Sept. 16, the then-U.S. Ambassador to the United Nations Susan Rice said during an interview, "We do not have information at present that leads us to conclude that this was premeditated or preplanned" and "Soon after that spontaneous protest began outside of our consulate in Benghazi, we believe that it looks like extremist elements, individuals, joined in that in that effort."

Rice is now President Barack Obama's National Security Adviser. In this position, she is the senior official in the administration who serves as the senior adviser to the president of the United States on national security issues.

These past few weeks, as events involving Syria have unfolded, the light-bench strength of Obama's national security team has become apparent as the administration has bumbled and stumbled.

"We will be able to hold Bashar al-Assad accountable without engaging in troops on the ground or any other prolonged kind of effort in a very limited, very targeted, very short-term effort that degrades his capacity to deliver chemical weapons without assuming responsibility for Syria's civil war," U.S. Secretary of State John Kerry said at a press conference in London with British Foreign Secretary William Hague this past Monday. "That is exactly what we're talking about doing -- unbelievably small, limited kind of effort."

At this same press conference, Kerry noted as an aside, in what appeared to be an off-the-cuff remark, that if Assad were to hand over his chemical weapons stock, he might avoid an attack.

Russian President Vladimir Putin seized on this remark and turned it into an opportunity to project Russia onto the world stage. Russia proposed a deal wherein Syria would turn over its chemical weapons to the international community. While Kerry had floated the idea, Putin jumped on the opening and took it a step further by getting a Syrian and U.N. buy-in. Opportunistic and smart for Russia.

Obama reacted to Putin's move by asking Congress to delay a vote to authorize U.S. military action against Syria so that he could focus on the Russian plan. How convenient: The vote more than likely would have been defeated in the House of Representatives. While Obama attempts to grab partial credit, noting that this idea had been floated between he and Putin before, the fact that Obama cancelled bilateral talks in Moscow a few weeks ago makes one wonder.

While some critics have labeled this confluence of events as leading from behind, it might be more accurately labeled as following from behind.