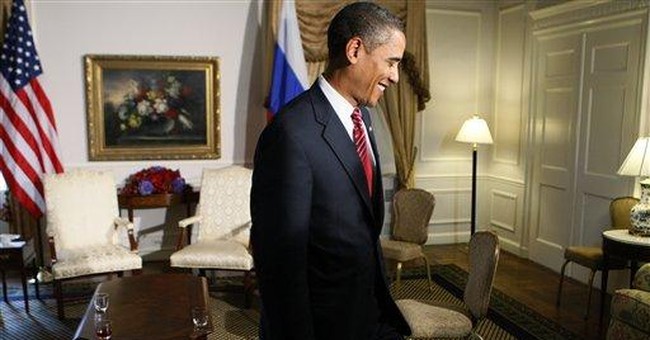 "I can't watch anymore," my friend Wes said yesterday in reference to the current administration. "It's just more than I can take."

As the owner of a construction firm, Wes is focused on trying to find new business while finishing projects that require he comply with numerous government codes — like getting the right color tapes on the right wires. He said that it would be nice if the government would get out of his way and let him run his business unfettered.

It's not the media exposure of President Barack Obama that is overwhelming — it's his government's overreaching. Obama appeared on five television shows this past Sunday and continued his media marathon Monday on the "Late Show With David Letterman," but media madness is all part of the effort to sell his health care plan and is to be expected.

The problem is not that Obama is overexposed from a media perspective — it's that his government has gone too far for most Americans. According to a Gallup poll released Monday, most Americans "believe that government is doing too much."

Pushed too far, people become exhausted. Our government is exhausting many of us.

When Obama took office, he began with the hurried passage of the stimulus package. Government intervention rapidly extended to the financial sector, the automotive industry, a budget with a large deficit and a cap-and-trade bill.

The current policy tornado swirling around the country is Obama's undertaking in health care, which represents 16 percent of our nation's output. This attempt at massive intervention in health care could lead his administration to the undertaker.

According to a Rasmussen poll released Tuesday, "66 percent of voters nationwide say they're at least somewhat angry about the current policies of the federal government." Of course they are — that is what happens when the American people believe that their government is becoming too involved in their lives.

They become exhausted and angry, and want the government to go away.

According to the U.S. Department of Labor, 15 million people were unemployed in August. An additional 9 million who would rather work full time were working part time. This equates to 24 million Americans who are either unemployed or underemployed. Their top priority is finding a job that puts their skills to use and provides for themselves and their families.

They want to believe that their hard work will lead to a brighter future.

But, while millions of Americans are trying to find work, our government is running rampant.

The same Gallup poll reported that 57 percent of Americans "believe that the government is trying to do too many things that should be left to businesses and individuals." The prior peak of 59 percent was recorded in 1998 during the Clinton administration. Right now, people want government to leave them alone, to get out of the way, so that they individually and through their businesses can make progress. They believe that less government, not more, would improve their lives.

Possibly you have had times in your life where you have been overwhelmed by attention from a spouse, a child or a parent. They just won't leave you alone. There is more going on, more information, more intrusion and more activity than you can handle. This often leads to exhaustion, shutting down, dismissal or — in the case of a neighbor with small children — hiding from them behind the dining room curtains.

Instead of slowing down and listening to the people, Obama continues to smile during media events while pushing and prodding the American people. There is no place where the administration fears to tread. Obama recently asked New York Gov. David Paterson to pull out of the 2010 governor's race. Paterson decided to run anyway.

Wow — an administration concerned not only with stimulus, the financial sector, the automotive industry, the Middle East, global warming, education and health care, but also the New York governor's race.