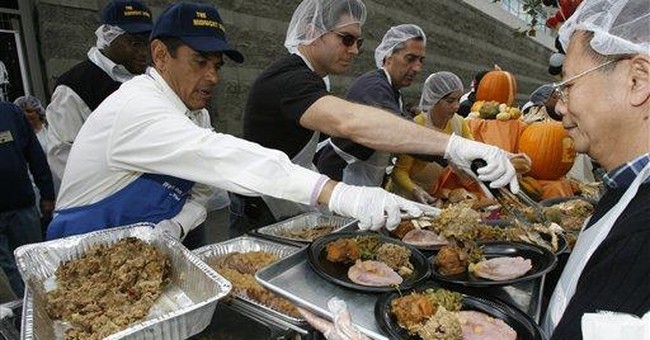 This past Sunday, I listened twice to the parable of the Good Samaritan. The first time was during a morning church service with my family in Atlanta; the second time was during an afternoon funeral in Carrollton, the west Georgia town where I grew up.

The parable tells of a man who was attacked, beaten, stripped and left for dead by a band of robbers on the road between Jerusalem and Jericho. As he lay on the side of the road, two religious men passed by him –- a priest and a Levite. They were men people considered close to God. But they did not stop and help the man lying by the side of the road. Possibly they had to be somewhere, possibly they were en route to special duties that only they could perform, possibly they were afraid – the parable does not say. But, whatever the reason, they did not stop. They passed him without helping him.

Later, a Samaritan was walking on the opposite side of the road. Samaritans were thought to be religiously inferior. But the Samaritan crossed over to the man and cared for him. He then took him to an inn and gave the innkeeper money to continue caring for the man until he was better.

The parable ends with Jesus asking which of these men was a better neighbor to the man who was robbed.

The answer might appear to be obvious – the man who stopped what he was doing and took care of the man who was hurt. But certainly the priest and the Levite thought that they were doing the right thing in God’s eyes. After all, they were men of God. The question leads us to ask ourselves: Would we stop and help, or hurry on our way to something we deemed more important?

The funeral I attended was for Tracy Stallings, the father of a childhood friend. He was also a community leader (having served for decades in public office), and a fixture in the church where I grew up. In my mind, he was part of the firm foundation of our community. He was a good man, who started with nothing, worked his way up with the help of others, and made it his life’s mission to help those around him. He embodied the core beliefs of America: faith, family, patriotism, freedom, opportunity, hard work and charity.

The parable reflected his actions toward others through his life: one person helping another person. This parable does not ask us to help millions, just the one person we see in need of assistance in our life’s path. The transfer of assistance, support and hope from one human being to another is the core of the story. It is the human touch, the interaction between people, which makes it so important and real to us today.

During the funeral, I looked around the church in the town I had left a quarter century before. I felt as though I was in a time warp. Many of the people were the same, just a bit grayer. The people of the church provided me with comfort and a sense of continuity.

The parable and the trip to my hometown remind me of what makes life magical: people. In a world tormented by materialism, our focus needs to change, from the material to the personal. Creating value for people should be our goal – touching human lives specifically and individually. This creation of value leads to personal satisfaction and then monetary rewards.

Instead, many have reversed the cycle, focusing on the monetary reward as the way to get personal satisfaction, and trying to buy additional value rather than build additional value. We have made the mistake of taking the outcome of the process too seriously – like the priest and the Levite – focusing on the material rewards rather than the process of living. Instead, we should focus on the process of creating value of others.

When life seems to speed up – we need to slow down, and refocus on people rather than events, and value rather than money. Creating value for people is what life is all about.

As I drove back from Carrollton to my home in Atlanta, I thought about Tracy Stallings, and the importance of pillars in our community and cried. He took time on his journey through life to stop, and help others in need.