Isabelle Morales
|
Posted: Oct 30, 2020 12:01 AM
Share   Tweet
The opinions expressed by columnists are their own and do not necessarily represent the views of Townhall.com. 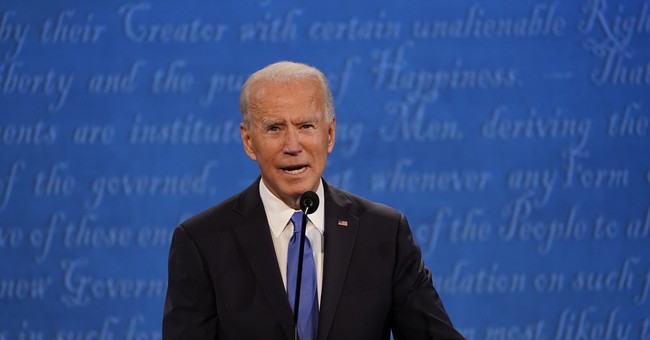 Joe Biden would force semiautomatic rifle owners to either participate in a gun buyback program, or register their firearm under the National Firearms Act, which requires the payment of a $200 tax. This would extend to AR-15s and other common household rifles. Those who do not comply would face up to 10 years in federal prison, and a potential $10,000 fine.

This is yet another violation of Joe Biden's pledge against any tax increase on anyone making less than $400,000 a year. In fact, it would hit working class Americans the hardest.

As detailed on Biden’s campaign website, this proposal would give semiautomatic rifle and high capacity magazine owners two choices: participating in a gun buyback program or registering said guns and magazines under the National Firearms Act. This triggers the $200 tax for each gun and magazine registered.

In order to register a firearm (or a magazine, under Joe Biden's plan), you have to send in a 13-page, complicated application form with the $200 tax included, your fingerprints, and a photograph of yourself. In this way, the hurdles to legally own your weapon or high-capacity magazine go far beyond the expensive tax.

Given there are nearly 18 million AR-15s privately owned in the United States, gun owners could potentially be forced to pay a collective $3.6 billion in taxes. This figure doesn’t even include other weapons the left considers “assault weapons” and the additional magazines gun owners would have to register.

According to the Biden campaign, any magazine that holds more than 10 rounds is a “high capacity” magazine. Even if someone owns only one AR-15 and has just four standard capacity magazines, they would owe the federal government $1,000.

Suddenly, gun control becomes less about mere firearm ownership and more about controlling working-class Americans. In urban areas, where people are most vulnerable to crime, it’s not hard to imagine how crushing this could be. There is nothing new about leftist politicians taxing urban residents in order to dictate behavior, ownership, and lifestyle.

In poor rural areas, the ability to hunt, fend off dangerous animals, etc. would be especially compromised. In Time Magazine, one article explains that "leaders of 15 state shooting groups said semiautomatic rifles are popular with hunters in their states. Hunters say they favor the gun for its versatility, accuracy and customizable features for shooting animals. This group explains that AR-15s and AR-10s can be effective in hunting pigs, goats, jackrabbits, elk, coyotes, and deer. In Pennsylvania, where semiautomatic rifles are allowed for hunting, 374,690 deer were harvested in 2019.

Like many other “wars” imposed on American citizens, the “war on guns” would disproportionately affect working class citizens and minorities. Many in these groups would find themselves incapable of paying for the ability to practice a constitutional right of theirs. It’s appalling to assume that these citizens should be given a lesser ability to defend themselves, their family, and this country. This law would create massive practical and financial hurdles to the innate right of self-defense. These kinds of government-made hurdles, notoriously, create larger gaps between wealthy and working-class Americans. Only this time, the gap is not only characterized by income inequality, but will also create a gap in these groups’ access to a fundamental, individual, constitutional right.

The government’s power to control its citizens derives from its power to tax, and this law is a perfect representation of that reality.

The $200 gun tax suggests certain assumptions by Biden and other leftist politicians, made about working-class Americans and their ability to responsibly own firearms. The Second Amendment is a right held by all Americans, not just wealthy ones.