Irma Aguirre
|
Posted: Mar 06, 2020 12:02 PM
Share   Tweet
The opinions expressed by columnists are their own and do not necessarily represent the views of Townhall.com. 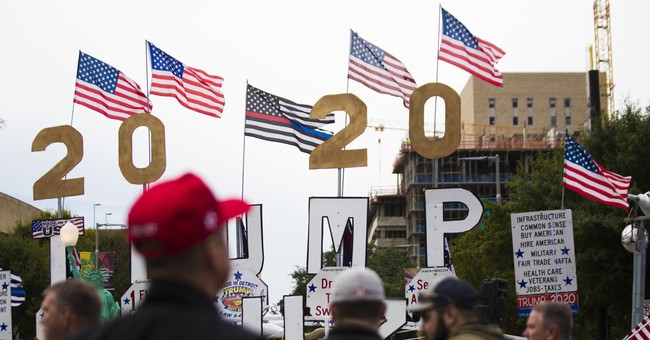 Hispanic Americans are thriving like never before in today’s strong and growing economy, and it's all thanks to President Trump.

When Barack Obama was in the White House, millions of Latinos across America struggled to find jobs and recover from the devastating Great Recession. While the political establishment in Washington obsessed over stock prices and corporate profits, too many Latino families were unable to make ends meet, wondering if the American Dream had died.

As a Latina entrepreneur who also serves as a member of the Board of Directors for the Latino Coalition, I’ve met hundreds of Hispanic Americans over the years who felt completely forgotten by their so-called representatives, left to weather the storm of economic instability on their own. These often heartbreaking conversations made me realize an important truth — our community deserves political leaders who actually advance our interests, rather than merely pandering for our votes.

Luckily, we finally got what we deserve with the election of Donald Trump.

President Trump has taken a drastically different approach from his predecessor. Instead of treating Latinos like children who need to be taken care of by a supposedly benevolent government, the president implemented economic policies designed to unleash our full potential — policies that allow Hispanics to achieve prosperity for ourselves, rather than handouts that keep us mired in mediocrity.

Thanks to common-sense policies such as middle-class tax cuts and responsible rollbacks of job-killing regulations, the Hispanic unemployment rate has dropped to an all-time low under Donald Trump.

“We are in the midst of a great American comeback,” the president said during his address at the Latino Coalition Legislative Summit this week, pointing out that his administration has created an astounding three million new jobs for Hispanic Americans in just three years.

We’re keeping more of the money we earn from those jobs, too. Not only did the Tax Cuts and Jobs Act save the average taxpayer about $1,400 on their federal income taxes in 2018, but it also doubled the child tax credit, providing a massive stimulus to working families.

President Trump’s pro-growth economic agenda has liberated Hispanic Americans all over the country from the shackles of government dependency, giving us a genuine opportunity to lift ourselves and our communities up and end the cycle of poverty that has long plagued the Latino community.

The president’s Opportunity Zones initiative, for instance, is projected to drive about $100 billion in new investments in housing, infrastructure, and commerce to thousands of economically-distressed communities all over the country that are collectively home to some 9 million Hispanic Americans.

As President Trump noted in his remarks to the Latino Coalition, more than 600,000 Hispanic Americans have been lifted out of poverty, and the median household income of Latinos has climbed above $50,000 for the first time in American history.

Instead of offering Latinos welfare handouts, Donald Trump is offering us genuine opportunities to succeed on our own. Under his leadership, our community has risen from the ashes of the Great Recession and rediscovered the American Dream. And all we have to do to keep the good times rolling is to make sure that this president wins re-election in November.