The Winnable Battle Republican Leaders Refuse to Wage on Immigration 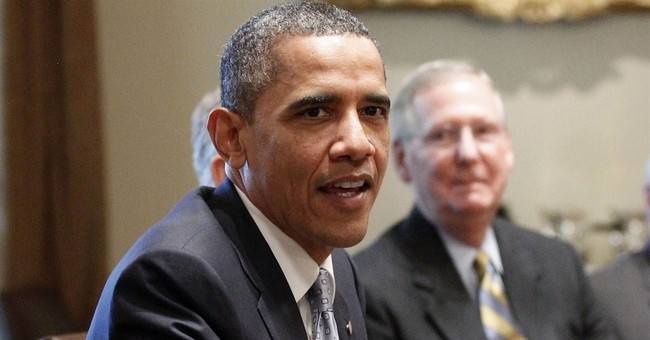 If ever there was an important political battle the Republican leadership couldn’t possibly lose, it is the one over defunding President Obama’s actions granting roughly 5 million illegal aliens de facto amnesty and work authorization. And yet, they are doing just that.

Republican leaders are routinely on record denouncing the president’s programs as an abuse of executive authority, and a federal judge in Texas issued a temporary injunction as a result of a lawsuit brought by 26 states agrees.

The American public also wants the president’s amnesty programs stopped, for good reason. Millions of illegal aliens would become legally eligible to compete for their jobs, and loopholes in the tax laws would allow Obama amnesty recipients with newly minted Social Security numbers to collect three years’ worth of retroactive

Despite having pledged to defund the president’s amnesty programs after winning control of both houses of Congress, Republican leaders are now engaged in full-scale preemptive surrender, for fear of media criticism and displeasing the business lobby. Defunding would necessarily entail a partial shutdown of the Department of Homeland Security – sidelining about 15 percent of the agency’s personnel who are deemed nonessential. It is a scenario nobody wants, but it’s an outcome that would be entirely the responsibility of President Obama and Senate Minority Leader Harry Reid (D-Nev.).

After the House approved language barring DHS from spending money to implement the president’s amnesties, Republican leaders essentially threw in the towel. It is true that they could not muster the 60 votes necessary to include defunding language in the Senate’s version of the DHS appropriation and that even if they had the president would have vetoed the bill. But they also never pointed out the obvious: It was the president and the Senate minority who were holding the DHS budget hostage to a blatantly partisan political agenda (and subverting the Constitution in the bargain).

The indisputable truth is that the House approved the $40 billion the president requested to operate DHS through the remainder of the fiscal year, but with one proviso: he could not use any of that money to implement a massive amnesty that had never been legislated. In fact, allowing the president to move forward with his amnesty programs (if and when the injunction is lifted) would weaken homeland security as manpower and funds are diverted from the job of protecting the nation in perilous times to the politically-driven task of processing millions of deferred action applications.

The inescapable conclusion is that this is a battle the Republican leadership wants to lose. They want the outcome –de facto amnesty (which is supported by the business lobby) – without having to face the political consequences from their voting base. Thus, they have settled on a strategy of symbolic protest followed by feigned resignation to what they claim were forces beyond their control.

American workers and taxpayers might well prevail in the courts. The lawsuit brought by the 26 states could ultimately result in the president’s programs being struck down as an unconstitutional exercise of executive authority. The case is now before the 5th Circuit Court of Appeals, and in all likelihood will be decided by the U.S. Supreme Court.

But even if Republican congressional leaders truly believe that the president’s amnesties will be stopped by the courts it is not an excuse for abdicating their responsibilities. A wholehearted effort to defund the amnesties in the 2016 budget would either result in those programs being killed, or the president and his allies being forced to explain to the public why they are holding up funding for DHS in order to reward illegal aliens.

Far from being an unwinnable battle, a well-articulated effort to cut off funding for an unconstitutional executive amnesty provides the GOP leadership a golden opportunity to do what is right and politically popular – an opportunity they seem intent on squandering.