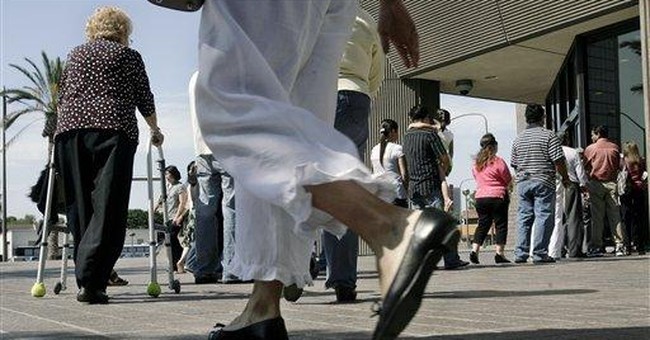 Congress adjourned for a month-long recess on Aug. 1, the same day that the Bureau of Labor Statistics released distressing news about unemployment. The July economic news was not good. The official unemployment rate hit a four-year high of 5.7 percent, as the economy shed 51,000 jobs last month, bringing the total of lost jobs for 2008 to 463,000.

Seemingly oblivious to what is happening back in their states and districts, the House Immigration Subcommittee finished up business for the rest of the summer by approving legislation that, if enacted, would “recapture” some 557,000 visas that were not used during the years they were made available, going back as far as 1992. The bill, H.R. 5882, was introduced by Subcommittee Chairwoman Zoe Lofgren (D-Calif.).

More than half of these wily visas-that-got-away would be employment-based, while the rest would be recaptured for family-based immigrants. Since immigrants who are admitted under family preference categories are also likely to need a way to support themselves, most of them would also likely enter a tightening labor market.

Aside from the fact that our slumping labor market does not require lots of new workers right now, Rep. Lofgren’s bill treats the issuance of green cards as an entitlement, rather than a privilege. Current laws set a ceiling the number of visas that can be issued in a given year; Rep. Lofgren’s bill would turn a ceiling into a floor and allow immigrants to claim those green cards years later.

While the House is acting to recapture visas in a free-standing bill, Sen. Robert Menendez (D-N.J.) is spearheading the Senate effort to corral those elusive little devils. Rather than recovering visas from the 1990s in a stand-alone bill like the House, Sen. Menendez is attempting to amend legislation to reauthorize E-Verify, a successful program that allows employers to access the Social Security Administration’s database to screen out illegal aliens. Reauthorization has already been approved by the House by a vote of 407-2, but is being blocked in the Senate by Mr. Menendez.

Without reauthorization, E-Verify will expire in November (only a short time away on a very abbreviated legislative calendar). Thus, the price that Sen. Menendez is asking to continue a program that protects thousands of Americans from losing their jobs to illegal aliens is the admission of hundreds of thousands of new workers to compete with them in a recessionary economy.

Now, if Congress could only write legislation to recapture those lost American jobs!

The push for admission of hundreds of thousands of new foreign workers is a graphic reminder of why Congress is held in such low esteem by the American public. At a time when 8.8 million Americans are officially unemployed, when our economy is losing more jobs than are being created, and when people’s paychecks are not keeping up with the soaring costs of food and energy, the agendas of the business and ethnic lobbies still takes precedence.

With the election just three months away, every member of Congress will spend their summer vacation feeling the pain of the folks back home and assuring constituents that they are doing everything in the power to protect the jobs and wages of American workers. In reality, back in Washington, many are doing just the opposite.

Given the complexity of the economic problems confronting this country there may be very little that Congress can do in the near term to bring back lost jobs – especially those that pay high wages and offer benefits. However, there is a lot they can do to make the situation worse for American workers. Failing to reauthorize E-Verify would be one of them. Flooding the already distressed labor market with hundreds of thousands of new workers by dusting off visas long past their expiration dates would be another.

Even if they can’t shake the economy out of the doldrums, Congress can cushion things a bit for American workers as the economy heads into recession. E-Verify already exists and is being used by some 75,000 employers. Eleven states already require or encourage contractors to use the system to verify the work eligibility of their employees. A vote by the full Senate is all that stands in the way of an additional five years of protection for thousands of American workers against losing jobs to illegal aliens.

All that is required in order not to flood the labor market with hundreds of thousands of new workers during a recession is for Congress to do what Congress does best. This is one time when a do-nothing Congress would be wise to do nothing. If there is one thing that American workers don’t need right now it is a congressionally mandated search-and-rescue mission for immigration visas that, for one reason or another, went unclaimed 15 years ago.

By any estimation, Americans workers are going to be in for a tough few years. The least people can expect from Congress is that they not make things worse by eliminating protections for workers and adding lots of new workers to compete for a dwindling number of jobs.