Rand Paul and the Future of Conservatism 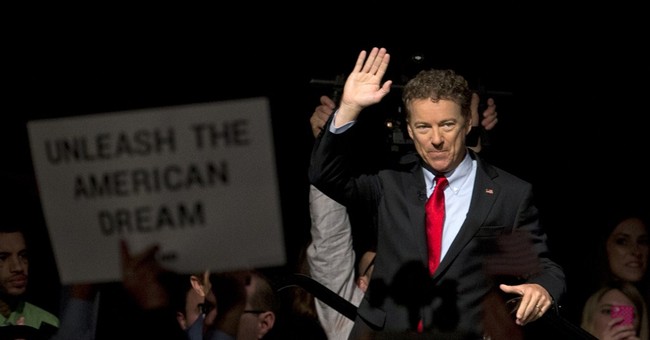 Libertarians are by definition individualistic, and so the sorts of debates you often hear at their gatherings often revolve around questioning someone’s ideological bona fides or debating how much libertarians should get involved in the messy, compromise-filled world of politics. Rand Paul’s formal entry into the 2016 presidential campaign crystallizes both of these discussions – and David Boaz offers thoughtful perspectives on whether Paul is a real libertarian and whether a libertarian-leaning politician can win the GOP nomination.

But another way of framing that debate is to approach it from the perspective of those who are comfortably on “the Right” but without fully labeling themselves either conservative or libertarian. Frank Meyer, father of longtime Federalist Society president Eugene Meyer, launched such a “fusionist” project in the pages of National Review. Half a century later, another NR writer, Charlie Cooke, has issued a Conservatarian Manifesto (which I’ve reviewed for a forthcoming issue of the Cato Journal).

So is Rand Paul that magical candidate who can finally “unite the right” in this manner? We’ve seen glimpses of that possibility, and two years ago, I penned an op-ed with my social-conservative friend Francisco Gonzalez of the James Madison Institute (Florida’s leading free-market think tank) that posited that Paul “can shape the future of conservatism”:

As a libertarian and a traditional conservative, we disagree with Paul on a number of issues. Yet we both see his constitutional conservatism as auguring a future in which social tolerance, fiscal temperance and a humbler role for government are pursued not as ends in themselves but because that’s the best path… .

1. Its social policy will focus primarily on protecting freedom of conscience in an increasingly pluralistic society, while undoing the excesses of the drug war and punitive sentencing for nonviolent crime… .

2. This new conservatism will align with the ideas of governors such as Scott Walker of Wisconsin and Bobby Jindal of Louisiana, who are fighting battles for domestic policy reform… .

3. We also need to unwind our military engagements while maintaining flexibility in a rapidly changing world… .

4. Finally, conservatives should consider comprehensive immigration reform that would allow skilled and unskilled workers to seek their American dream while granting parole, not amnesty, to those hard-working migrants now here illegally.

Of course, this vision may come to fruition even if Rand Paul doesn’t win his party’s nomination. Save social-conservative populists like Mike Huckabee and Rick Santorum, all of the GOP contenders offer something for socially liberal, fiscally conservative voters. For that matter, one could argue that Ted Cruz is even more libertarian than Rand Paul but is just positioning himself differently – but I’ll leave that parlor game for the next Cato happy hour.

In any event, if Ronald Reagan was right that “the very heart and soul of conservatism is libertarianism,” then the Republican Party seems to be moving (back?) towards conservatism’s heart. After all, this is its most libertarian field since Calvin Coolidge was essentially unopposed for the nomination in 1924. That may not be saying all too much, but it’s a hopeful step for those libertarians who do care to engage in major-party politics.