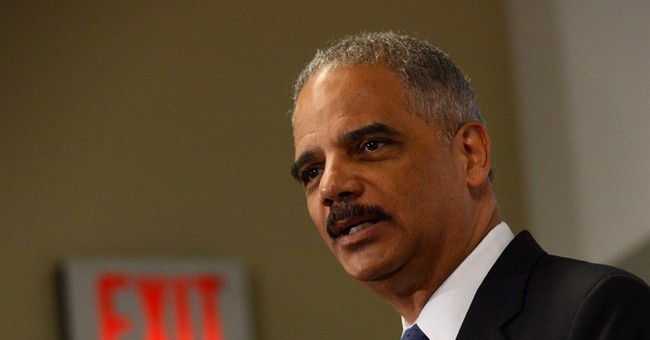 Eric Holder’s tenure marked one of the most divisive and partisan eras of the Justice Department. From his involvement in the bizarre guns-to-gangs operation (“Fast & Furious”), for which he has been cited for contempt by the House and referred to a federal prosecutor (which referral went nowhere due to invocations of executive privilege), to his refusal to recognize the separation of powers—enabling President Obama’s executive abuses—he politicized an already overly political Justice Department.

One thing that differentiates Holder from other notorious attorneys general, like John Mitchell under Richard Nixon, is that Holder hasn’t gone to jail (yet; the DOJ Inspector General better lock down computer systems lest Holder’s electronic files “disappear”).

Holder’s damage to race relations may be even worse than his contempt for Congress, however, as his management of the Justice Department and use of its powers betray a desire to use the law to advance a dubious view of social justice. For example, he sued fire and police departments to enforce hiring quotas and inflamed social tensions with his pronouncements on Stand Your Ground laws. He blamed banks for not lending enough to members of racial minority groups and other banks for “predatory lending” that led to disproportionate bankruptcies among those same groups. Ironically, he’s even challenged school choice programs, which overwhelmingly help poor black kids acquire better educations.

Still, it must be said that Holder was a “uniter not a divider” on one front: under his reign, the Justice Department has suffered a record number of unanimous losses at the Supreme Court. In the last three terms alone, the government has suffered 13 such defeats – a rate double President Clinton’s and triple President Bush’s – in areas of law ranging from criminal procedure to property rights to securities regulation to religious freedom. By not just pushing but breaking through the envelope of plausible legal argument, Attorney General Holder has done his all to expand federal (especially executive) power and contract individual liberty beyond any constitutional recognition.

Eric Holder will not be missed by those who support the rule of law.