Locked Down And Locked Out: First The State, Then Silicon Valley

Ilana Mercer
|
Posted: Jan 15, 2021 12:01 AM
Share   Tweet
The opinions expressed by columnists are their own and do not necessarily represent the views of Townhall.com. 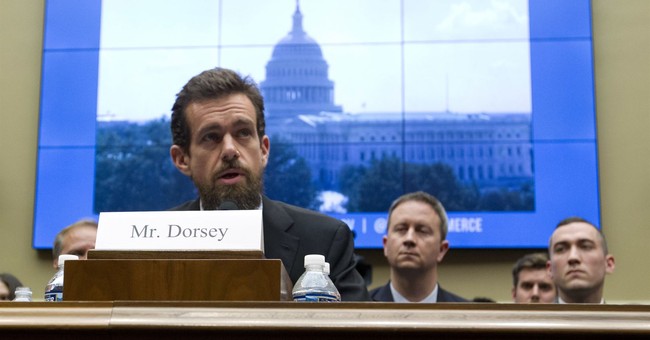 Aa a coinage goes, deep tech is superior to the Big-Tech term. It better captures the deforming power and tentacular reach into state and civil society of the high-tech monopolists.

That reach notwithstanding, many libertarian-minded and “small-government conservatives” (a contradiction in terms, considering the national debt is $28 trillion) have been stalwart defenders of the rights of Deep Tech to deploy unprovoked financial force to kneecap those users who don’t conform to the tech oligarchy’s monolithic image of the Ideal Citizen.

David French, writer at the Dispatch—and one of the many political dwarfs tossed periodically at Donald Trump by Never Trumpsters (hey, dwarf tossing is a cruel sport)—emphasized the immutable right of private platforms to de-platform (limit and throttle) “millions of Americans who engage in wrongthink,” the president included.

Let the disenfranchised—those of us who’re routinely blocked from being able to grow our appeal and peddle our intellectual products, now fearful that our books will be digitally burned—create platforms of their own, exhorts French, from the comfort of his conformingly banal, pixelated perches.

This cynical suggestion is the equivalent of, “Let them eat cake,” which, in practice means, let political dissidents go dark or resort to a barter economy.

This observation both trivializes what’s afoot and misses the point, for financial de-platforming teeters on violating another’s natural right to make a living.

How do you make a living if you can’t bank? Do you revert to a barter economy (a book for some bread)? Go underground? Hunker in home-based industries? Keep afloat by word of mouth? Go door-to-door? Oh, I know: Beat the tom-tom drum if your email service is severed, given that our email accounts and other server-supported facilities are currently under threat, too, with nary a remedy from fat-cat representatives.

FLOUTING THE SPIRIT OF CIVIL RIGHTS

As a social-media platform, Parler has been found lacking by the Deep Tech overlords simply because it sports a different business model.

Deep Tech restricts speech to comport with its censorious, progressive and politically correct, do-or-die guiding lodestars. Parler’s business model, on the other hand, is based on more free speech, not less of it.

Quislings such as Apple, Amazon, Facebook and Twitter quickly colluded in flagrant violation of the American pro-competition sensibility and flouting the spirit, if not the letter, of civil rights law to financially segregate, banish and cripple irksome people and enterprises, Parler, in our example. Quick to ape them were other fearful vendors, lawyers, for example.

“Whatever Trump did, there is no excuse for what happened to Parler,” protested David Sacks, a liberal.

“Barring businesses from using online payment systems,” seconded Never Trumpster Bari Weiss, “removing companies from the App Store; banning people from social media — these are the equivalent of telling people they can’t open a bank account or start a business or drive down a street.”

Nice, but Weiss failed to analytically distill the meaning of that prohibition:

“[T]elling people they can’t open a bank account or start a business or drive down a street” is the equivalent of informing them they might not be able to make a living, despite the fact that they are innocent; their only offense is to type or waft words into the ether.

I had tweeted out the above in disgust, appended to a screen picture of the following ubiquitous nullity: “We’re having trouble finding Parler; check your network connection.”

“Stop with the monopoly talk,” admonished a diehard ideologue in reply. “You sound like the government interventionists of the Progressive Era.”

Yes, let the unfettered market-place, peaceful and slow, remedy the speedy and deadly aggression of our tech enemies, who come at us in war, not peace.

As the conformists persist in puling, “build your own platforms.” Right. Parler was ever so confident The Competition would be happy for its business. As was I.

For its confidence, Parler was subjected to a coordinated financial attack; dealt an unwarrantedly aggressive, financial death knell. The social-media platform was forthwith robbed of its value, even though it was not the aggressor in a dispute it did not pick—Parler had not defaulted on its financial obligations, and it didn’t perpetrate fraud on its users or vendors.

So, how do conservatives create an “alternative” to Google, Apple, Facebook, Amazon, and Twitter, when these are conglomerates whose revenues are greater than “the GDP of four of the G20 nations”; and when “they are, collectively, more powerful than most, if not all, nation states”?

And when, more importantly, the men and women of Deep Tech no longer have products on their megalomaniacal, petty minds.

When Facebook, Google, Twitter, Apple, and Amazon were growing up, they wanted to be government. Now they are!

Think about this: These are “businesses” whose political plank dwarfs their economic and technological raison dêtre: Work for them and you’ll quickly learn that it’s about minorities before merit, foreign over native born, women above everybody and everything, and white men who’re made to go to the back of the org, yet do double duty for all the deadwood hired.

And, everything in deeply ignorant Deep Tech is done by the book—the White Fragility book, a favorite “teaching” resource of the barely-literate, Human Resources personnel.

The profit-structure, moreover, within many a Deep Tech company is reminiscent of that of a Petro-State. Billions flow top down, from these Sheik-dominated organization—Bill Gates, Satya Nadella, Mark Zuckerberg, Tim Cook, Jeff Bezos—on to their pet political fiefdoms, within each of their respective companies, where, navigating politics is more valuable than making products.

Dissident Americans take comfort in the fact that our lepper-like ouster—de-platforming, financial and other—is executed by private companies. Discrimination, aver the libertarian-minded among us, is the prerogative of private property. Or, so we console ourselves. We’re safe, for aggression for the sake of aggression, as we libertarians have long maintained, is the modus operandi of the state, not free enterprise.

Yet, here we are! In more effectively banishing people and their products from market, private multinationals are posing a serious competition to The State.

And therein lies the rub. Fresh theoretical thinking about the meaning of Deep Tech begins with an understanding that we live and labor under tyrannical corporate statism, or tech-dominated statism. Free-market capitalism remains the “unknown ideal.”

Parler’s sudden (temporary, we hope), financial demise was no natural death; it came not by dint of economic failure, but due to untoward, unwarranted, financial force—economic aggression of the most cowardly kind, wielded by economic enemies, and rooted in political enmity.

In defending Deep Tech’s prerogative to visit economic and social violence on innocent individuals and businesses by tossing them off their enormous, irreplaceable platforms, for speech not to their liking—not to mention throttling our speech, and confining us to a leper-like tenuous status while on the platform—you are not defending the rights of private property to merely conduct itself as it wishes.

Rather, you are marching down the pirate’s plank, on a ship of state commandeered by pirates, who’re in competition with the state.

Ilana Mercer has been writing a weekly, paleolibertarian column since 1999. She’s the author of Into the Cannibal’s Pot: Lessons for America From Post-Apartheid South Africa (2011) & The Trump Revolution: The Donald’s Creative Destruction Deconstructed” (June, 2016). She’s currently on Parler, Gab, YouTube & LinkedIn, but has been banned by Facebook and throttled by Twitter.