Obama Doubles Down On Destroying The Economy 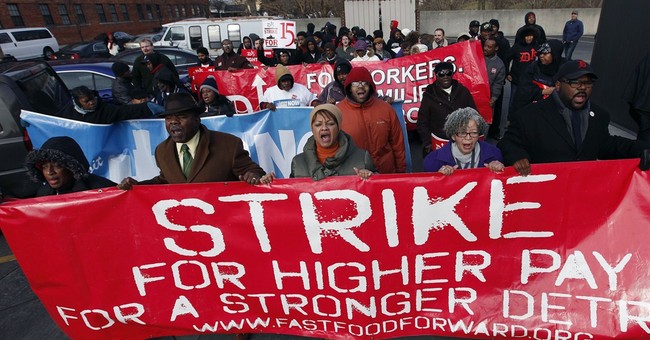 Is the president really this ignorant of business and economics?

Telling American employers to raise their wages sounds innocent enough. But it ceases to be innocent when people lose their jobs as a result of it.

In his State of the Union address, the president called for higher minimum state and federal wages and added: “ I ask… America’s business leaders to…raise your employees’s wages.”

This is not the first time a president has made this “request” of employers.

As the economy sputtered and prices began to fall, the president acted on his pet theory. He began lobbying businesses not to reduce wages. He did more than lobby. He sent a clear signal that if his directive was ignored, the government might step in and legislate wages.

Businesses listened. But they also had their backs against a wall. With consumer prices falling, wage reductions were needed to protect profits. Without profits, a business fails and everyone loses their job.

Faced with this reality, but afraid to make any reduction in wages, businesses did the only thing they could do to try to stay afloat: they cut jobs. Millions were thrown out of work who might have kept their jobs at reduced pay but for Hoover’s intervention.

When the new Roosevelt administration came in, it embraced the same bogus economic theory. Both prices and wages were tightly controlled by the National Recovery Act. In a famous incident, a New Jersey immigrant worker, Jacob Maged, was sentenced to jail for three months on a charge of pressing a suit for 35 cents instead of the legislatively required 40 cents.

These policies had the paradoxical effect of making some Americans newly affluent even while throwing millions out of work. Since prices had fallen sharply, those who kept their jobs at the old wages could in many cases buy twice as much with the same money.

The Hoover/Roosevelt/ Obama policy meant that some got a windfall; others got destitution. Economic inequality sharply worsened. In general, the Roosevelt administration’s most powerful supporters, labor unions, saw to it that their members did not lose jobs, while those without unions were the ones laid off.

It is noteworthy that the same thing happened when the Obama administration bailed out General Motors. The non-unionized workers, even those in the most efficient plants, lost everything: jobs and retirement benefits. Unionized workers allied with the president kept both.

In the same State of the Union speech, the president did not just ask employers to raise wages. He also required them to pay a higher minimum wage if they had a federal contract. Hearing this, employers can only wonder what further wage controls will be proposed next.

If more federal wage controls do come, it is not even clear that lay-offs could be used as they were in the 1930’s to save businesses from closing. Economist Paul Krugman has proposed federal controls on the right to lay-off or fire workers. The president himself has proposed giving workers the right to sue if they apply for a job and are turned down.

The economy itself provides sufficent reason to be cautious about hiring. The Federal Reserve’s low interest rate policy and regulatory rules make it very difficult to persuade a bank to finance expansion. And Obamacare creates a strong disincentive to hire the 50th employee.

With all this in the background, why would any employer in 2014 hire a new worker if not absolutely necessary? This is especially true for small businesses, and small businesses have always been the chief source of new jobs.

This is all part of a larger picture. To thrive, an economy needs free prices. Free prices not only provide the truthful signals that producers and consumers need in order to make good decisions. They also provide the discipline that any economic system requires.

The Soviet Union’s collapse was an object lesson for the world. No system can survive in the long run without free prices, and wages are among the most important prices.

The Obama administration’s whole approach is to try to substitute government regulation for the private price system. As a result, we only have “engineered” prices left on Wall Street and in medicine, and both finance and medicine are in grave jeopardy as a direct result.

Fixing the economy is not all that difficult. All we have to do is let producers and consumers sort out prices together and the engine of job growth will start up. Meanwhile the present administration offers one initiative after another guaranteed to keep the middle class and especially the poor in a state of economic hopelessness.

Read more at Against Crony Capitalism.org