Humberto Fontova
|
Posted: Apr 06, 2019 12:01 AM
Share   Tweet
The opinions expressed by columnists are their own and do not necessarily represent the views of Townhall.com. 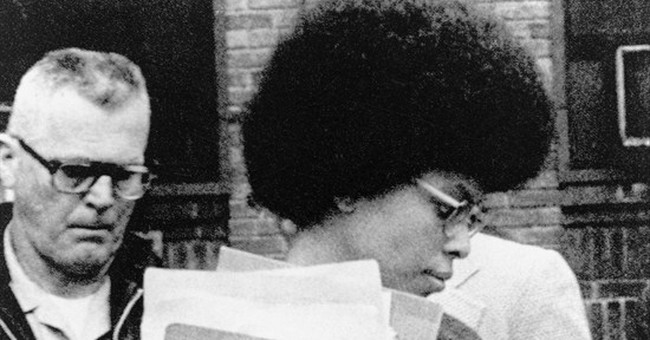 “I'm gonna actually have you participate with me in repeating some words from a leader by the name of Assata Shakur!”  (NAACP V.P. Jamal Watkins opening the We The People conference this week.)

Now regarding that “leader” whose words seemed worthy of opening a conference showcasing the entire roster of the Democrat Party’s Most-Likely-to-Succeed”:

In May 2013 the FBI announced a $1 million reward for "information leading to the apprehension" of Joanne Chesimard (also known as Assata Shakur) who they named a "Most Wanted Terrorist." Chesimard is the first woman to make the FBI’s list. The New Jersey State Police Dept., who also wants her, added another $1 million to the pot.

You see, amigos: Convicted cop-killer (of a New Jersey State-Trooper) and bona-fide "domestic terrorist" Chesimard (Assata Shakur) has been living in Cuba since 1984 as a Castro-coddled celebrity. But it’s not like bounty hunters can operate freely in a Stalinist country. So the $2 million was probably for show. Obama’s Justice Department was probably putting on a game face and saying: "Look Castro, we’re serious here! You better turn Shakur over, or…or--or ELSE!”

Or else WHAT?...Well we know the answer to that: or else we’ll take you off the State Department's list of terror-sponsors, open relations with you, return your convicted (all the way to the U.S. Supreme Court) murderer/spies. And then gift you with more U.S. dollars via travel expenses and remittances than what the Soviets used to gift you!...HA! --So TAKE THAT!

Which, of course, is exactly what happened as Assata Shakur remained snickering from her celebrity exile in the Castro-Family-Fiefdom.

More outrageous still, some of those heart-warming Obama-opened “educational” tours of Cuba by U.S. students seem to actually include inspirational visits with the U.S. convicted cop-killer.

In the early 1970s Chesimard belonged to a Black Panther offshoot known as the Black Liberation Army. "This case is just as important today as it was when it happened 40 years ago," said a press release from Mike Rinaldi of the New Jersey State Police when the bounty was placed on Shakur. "Chesimard was a member of the Black Liberation Army, a "radical left wing terror group that felt justified killing law enforcement officers...This group conducted assaults on police stations and murdered police officers."

You see, amigos: In 1973, while wanted for multiple crimes from bank robbery to murder, Chesimard and two accomplices were pulled over for a tail-light violation on the New Jersey Turnpike. As the troopers were routinely questioning them, Chesimard in the passenger seat, and her pals opened up on the lawmen with semi-auto pistols (no word on whether these were properly registered.)

As trooper Werner Foerster grappled with the driver, Shakur shot him twice--then her gun apparently jammed. As Foerster lay on the ground wounded and helpless, the honored commencement-speech composer for this week’s Democrat conference grabbed the wounded trooper’s own gun and blasted two shots into his head, much in the manner of her Cuban idols Che Guevara and Raul Castro murdering hundreds of their own (always defenseless at the time) "counter-revolutionary" enemies.

She escaped but was captured in 1977, convicted of murder and sentenced to life plus 33 years. Then in 1979 she escaped from prison--with some ultra-professional help, probably by Cuban or Cuban-trained terrorists. "Two men smuggled into the prison, took guards hostages and broke her out," explained John Miller to CBS News.

Chesimard’s 1979 escape from prison was well planned, Rinaldi explained in his press release. "Armed domestic terrorists gained entry into the facility, neutralized the guards, broke her free, and turned her over to a nearby getaway team."

"In 1984, they smuggled her to Mexico. Using a network of Cuban intelligence officers who worked with American radical groups, they got her into Cuba," added former Assistant FBI Director John Miller.

Since then, according to New Jersey State Police Col. Rick Fuentes, Chesimard "flaunts her freedom....To this day from her safe haven in Cuba Chesimard has been given a pulpit (by the Castro regime ) to preach and profess, stirring supporters and groups to mobilize against the United States by any means necessary. She has been used by the Castro regime to greet foreign delegations visiting Cuba."

"Joanne Chesimard is a domestic terrorist," declared FBI agent Aaron T. Ford, during a news conference at the time. "She absolutely is a threat to America."

Along with Chesimard, Castro’s fiefdom has provided haven for over 70 fugitives from U.S. law, including several on the FBI’s most wanted listed. Cuba also harbors convicted cop-killers Michael Finney and Charlie Hill, along with Victor Gerena, responsible for a $7 million heist of a Wells Fargo truck in Connecticut in 1983, as a member of the Puerto Rican terrorist group, Los Macheteros. All requests by U.S. authorities for these criminals’ extradition have been rebuffed, often cheekily by Fidel Castro himself: "They want to portray her as a terrorist, something that was an injustice, a brutality, an infamous lie!" Fidel Castro himself answered a U.S. request for Chesimard on May 3, 2005.

But was featuring Shakur’s (a rabidly, murderously anti-American, Castro-coddled cop-killer/terrorist’s) ravings at a Democrat conference a faux pas or fluke?  Or was it perfectly—almost immaculately—appropriate?

Well, regarding the cop-killer herself, Democrat luminary and power-broker Maxine Waters regards her as an “activist” who fled from “political persecution” in the mean ‘ole U.S.  and graciously received “political asylum” in Stalinist/terror-sponsoring Cuba.

And regarding Shakur’s savior from “political persecution” Maxine regards him as: "a bully, an egotistical maniac, a liar…the most deplorable person I've ever met in my life"—WHOOPS! Sorry, amigos! That’s Maxine Waters regarding the current freely elected president of her homeland.

Now here’s Maxine Waters regarding the Stalinist mass-murder whose lifelong craving was to nuke her homeland and who jailed and tortured the most and longest –suffering black political prisoners in the modern history of the Western Hemisphere:

“VIVA -FIDEL!—VIVA FIDEL!” (the occasion was the joyous, delirious, rafter-shaking reception for Fidel Castro upon his visit to Manhattan’s Riverside Baptist Church, a place he almost nuked.)