Humberto Fontova
|
Posted: Mar 30, 2019 12:01 AM
Share   Tweet
The opinions expressed by columnists are their own and do not necessarily represent the views of Townhall.com. 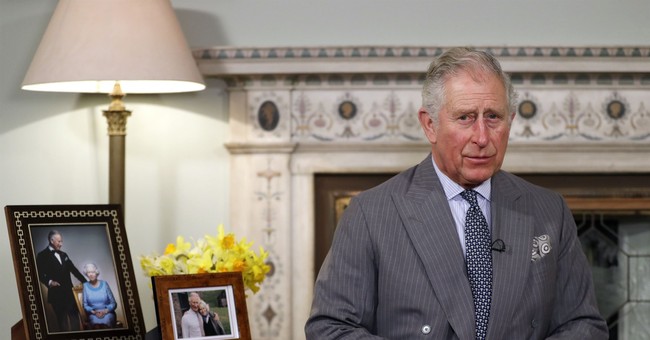 “Royal family snub President Trump during UK visit: Prince Charles and Prince William were unwilling to meet Donald Trump on his visit to Britain, leaving the Queen to greet the US president alone.” (London Times, July 18, 2018.)

Well, what could be more fitting than British royals snubbing the upstart leader of an upstart former British colony—and one who was elected by “deplorables” to boot?

On the other hand, Prince Charles and Duchess Camilla, not only rank as the first British Royals to grace Bolshevik Cuba with a visit—but this week (aping President Obama three years ago) posed for a photo in front of the image of mass-murderer and faithful Bolshevik protégé Che Guevara.

The phrase “faithful Bolshevik protégé” is not flippant. The Bolsheviks, lest we forget, sadistically murdered an entire family of Prince Charles’ royal relatives (the Romanovs) in cold-blood, including the women and children, as they screamed in terror and pleaded for mercy.

“I stuck around St. Petersburg, when I saw it was a time for a change, killed the czar and his ministers, Anastasia screamed in vain.” (Sympathy for the Devil, 1968.)

Nonetheless, according to Britain’s ambassador to Cuba Anthony Stokes, the royal visit to Bolshevik Cuba was a jolly-good show: “I think it’s been a wonderful visit and the first official royal visit to Cuba – I think that’s highly significant.”

“The solution to the world’s problems lie behind the Iron Curtain,” wrote Che Guevara who often signed his correspondence “Stalin II!” In fact, so fanatical was Prince Charles and Duchess Camilla’s photo prop’s devotion to the Bolsheviks that he even applauded the Soviet slaughter of Hungarian freedom-fighters in 1957. All through the horrifying Soviet massacre, Che dutifully parroted the Soviet script that the workers, peasants and college kids battling Russian tanks in Budapest with small arms and Molotov cocktails were all “Fascists and CIA agents!" who all deserved prompt execution.

Throughout the royal visit Duchess Camilla, a world-renown “women’s rights activist,” seemed enchanted to be photographed graciously meeting the KGB-trained apparatchiks and admiring the handiwork of a regime which ranks as the Western Hemisphere’s top jailer, torturer and murderer of (genuine) women’s rights activists.

In fact, the regime that so enchanted Duchess Camilla jailed and tortured 35,150 Cuban women (and girls) for political crimes. This ranks as a totalitarian horror utterly unknown—not only in Cuba, under those unspeakable “right-wing dictators!” you always hear about in the Fake News Media--—but in the Western Hemisphere. Some of these Cuban ladies suffered twice as long in Castro’s Gulag as Alexander Solzhenitsyn suffered in Stalin’s.

“Chirri was just a kid,” recalled one former Cuban prisoner named Ana Lazaro Rodriguez about one of her cellmates, “Barely 18. Tiny blonde and beautiful, she should have been going to high school dances. Instead because her father had been involved in a plot against Castro, she was squatting in a dark filthy cell, wallowing in menstrual blood and excrement.”

Jailing, torturing and murdering people (particularly females) for the crime of being related to “enemies of the Revolution,” by the way, comes straight from the Bolshevik playbook. The practice was started by the Soviet Cheka and greatly expanded upon by Stalin during the Great Terror. Naturally the Castros and Che Guevara adopted the practice with their own brand of gusto.

Not that at 18 Chirri was among the youngest female victims of Prince Charles and Duchess Camilla’s gracious hosts. “Mommy—MOMMY?—HAY!—NO!”  Ana Rodriguez recalls the shrieks of pain and horror coming from a nearby torture chamber.

The victim had been a 13-year-old girl raised in a Havana Catholic orphanage founded in 1705. Castroite commissars, perfectly mimicking their Bolshevik mentors, had taken over the orphanage and began hectoring the girls on how the nuns who had been raising them were actually witches preparing to sell them into prostitution. Many of the barely pubescent girls broke a blackboard and some desks in protest against the Bolshevik insults against the only home and mothers they’d ever known.

So the Soviet-mentored Castroite police yanked the little girls from the orphanage, hauled them down to the women’s prison and threw them into the cells with common prisoners.

Can someone out there puh-leeze inform all those tourists to Cuba and all those visiting dignitaries-- from Obama to Prince Charles and Duchess Camilla-- that the building with Che the mass-murderer’s mural they love to pose with as a backdrop is the headquarters for Cuba’s KGB-founded and mentored ministry of the interior (i.e. secret police)?

“Always interrogate your prisoners at night,” Che Guevara ordered his torturers during the early days of the revolution, “a man’s resistance is always lower at night.” That today the world’s largest Che mural adorns Cuba’s Ministry of the Interior, the headquarters for Cuba’s KGB- and STASI-trained secret police strikes many of us as perfectly fitting.

The prisoners in these KGB-designed chambers of horrors considered “waterboarding” a rest period, compared to the other tortures they were put through by the gracious hosts of the perpetually smiling Prince Charles and Duchess Camilla.