Humberto Fontova
|
Posted: Nov 17, 2018 12:01 AM
Share   Tweet
The opinions expressed by columnists are their own and do not necessarily represent the views of Townhall.com. 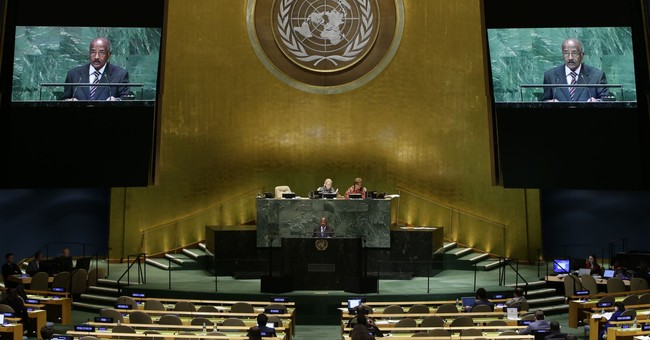 Don’t get me wrong, amigos. The Fake News Media does not term the recent UN vote in the same manner as does this column. Instead they reported (gloated) that: “UN voted overwhelmingly to condemn US embargo of Cuba….In a slap to the United States, the U.N. General Assembly overwhelmingly approved a resolution Thursday condemning the American economic embargo of Cuba and rejected proposed U.S. amendments strongly criticizing the lack of human rights in the island country.”

The occasion was the annual and ritual UN vote against the U.S. “embargo” of mass-murdering, mass-torturing, terror-sponsoring and kleptocratic Cuba, which sits prominently on the UN Human Rights Council! (For genuinely judicious people, this should reveal all they need to know about the UN.)

This mild incongruity (shall we say) did not go unnoticed by Ambassador Nikki Haley who promptly fired back at that assembly of frauds and hypocrites, essentially by quoting the late Tom Petty: “The United Nations does not have the ability or the authority to end the United States’ embargo of Cuba….Our reason for the embargo is and has always been Cuba’s denial of freedom and the denial of the most basic human rights for the Cuban people. The United States will continue to stand with the Cuban people until their rights and their freedoms are restored. Period…We won’t back down.)

In addition to this straight talking of the talk, the Trump team also walked the walk—and just this week, by tightening the sanctions against Cuba’s military and secret police robber-barons.

For the past 28 years at around this time members of the UN vote ritually, and almost unanimously, to condemn the U.S. for our (so-called) embargo of Cuba. Ritually only Israel votes with us during this charade—and two years ago Obama actually instructed his UN ambassador to “abstain” (a polite way of joining in the condemnation) from voting.

But let’s shovel away the mountains of classic United Nations BS and define this annual UN charade properly: the world’s biggest burglar (the Castro-regime), along with its enablers and sap burglary-victims (most UN members) all throwing a tantrum against the one nation on earth that has steadfastly refused to be (further) burglarized by the world’s biggest burglar (the Castro-regime).

Here’s one issue on which the American taxpayer can look across the oceans, touch his nose with his thumb, extend his hand, and fan his fingers while snickering; “YOU SUCKERS!”

You see, amigos: the taxpayers of nations from France to Spain to Germany, from South Korea to Japan and from Russia to Brazil –taxpayers of all these nations have all been shamelessly burglarized by the Castro-Family-Crime Syndicate (mislabeled “Cuba” by the Fake News Media.)

Of course we don’t hear or read much about this burglary in the Fake News Media. What we read is how these economically-sophisticated nations all “trade” with “Cuba,” --and that because of the machinations of the sinister and sleazy “Cuban-Exile Lobby” American businesses and their workers miss out on this financial bonanza of “trading with Cuba.”

Spain, for instance, is among the prominent Castro-Crime-Family’s burglary victims who always vote to condemn the U.S. for refusing to be similarly burglarized. So feel free to snicker at this recent news item:

“According to data from the Spanish Export Credit Insurance Company (Spain’s version of our taxpayer-funded Ex-Im Bank) the volume of defaults (by Cuba) is around 40 million euros, which requires keeping this (Spain’s) credit line closed until the situation is regularized.”

The Castro crime family stuck it to Mexico again four years ago, when its state development Bank Bancomex (Mexico’s version of our Ex-Im Bank) wrote off almost $500 million Cuba owed them from 15 years back. The Castros stuck it to Europe back in 1986, defaulting on most of their debt to the Paris Club. Fifteen years later the Castros stuck it to French taxpayers again for $175 million.

All of those Castroite burglaries are on top of the $30 billion in Castroite debt Putin’s Russia “wrote-off” just two years ago.

We’ve been spared such fleecing because on Oct. 1960—right after Castro’s gunmen stole $7 billion from U.S. businessmen and tortured and murdered a few who resisted-- President Eisenhower imposed the first economic sanctions against the thieving, mass-murdering Stalinists who mostly (still) run Cuba. These sanctions grew into one of the CROWN JEWELS of recent U.S. foreign policy: the Cuba “embargo.”

President Eisenhower, by the way, at much prodding by Vice President Nixon, was the one who got the ball rolling on what became known as the Bay of Pigs invasion. Unfortunately the ball landed in JFK’s lap. Had Nixon won in 1960, some bandit/murderers named Fidel Castro and Che Guevara would merit less Wikipedia column inches today than Pancho Villa.

So, amigos, when you hear or read the usual claptrap in the Fake News Media about the “Cuba embargo” simply replace that term with “trade credits from the U.S. taxpayers to the world’s biggest deadbeat/crooks” and you’ll get to the essence of the issue.

In brief, amigos: This U.S. refusal to let its taxpayers be burglarized by the Castro-Family-Crime-Syndicate is better known as “The Cuba Embargo.”