Humberto Fontova
|
Posted: Nov 03, 2018 12:01 AM
Share   Tweet
The opinions expressed by columnists are their own and do not necessarily represent the views of Townhall.com. 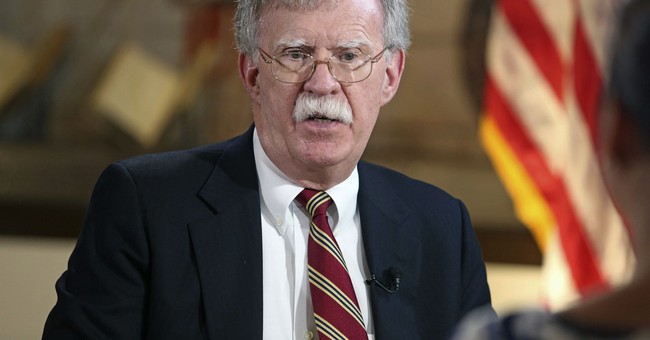 “Members of this (Trump’s) administration will never take a picture in front of Che Guevara…Under this administration we will no longer appease dictators and despots near our shores in this hemisphere. We will not reward firing squads, torturers, and murderers…The troika of tyranny in this hemisphere – Cuba, Venezuela and Nicaragua – has finally met its match. Our concern is with sanctions, not selfies.

“This Troika of Tyranny (the regimes in Cuba, Venezuela and Nicaragua)– this triangle of terror stretching from Havana to Caracas to Managua is the cause of immense human suffering, the impetus of enormous regional instability, and the genesis of a sordid cradle of communism in the Western Hemisphere. The United States looks forward to watching each corner of the triangle fall…”The Troika will crumble.” (National Security Advisor John Bolton, Miami, 11/1/18, while announcing fresh sanctions against Cuba and Venezuela.)

“There they go again!”  Democrats probably snort: “More of that shameless pandering by Republicans to their pet Cuba-American voters! More massaging of those ancient and embittered gripes of these insufferable Cuban-Americans! ...Instead candidates should address local and current pocketbook issues!”

Excellent point, Democrats. So as exhibit A, we’ll take “The Caravan” of Central American invaders making its way to our southern border. This issue seems to strike many Americans as an extremely current and relevant pocketbook issue, no? If not for the numbers of potentially criminal invaders—then of its symbolism as a mockery of U.S. laws and sovereignty, no?

Fine. Now here’s Vice President Mike Pence last week: “I spoke to President [Juan Orlando] Hernández of Honduras. He told me that the caravan that’s now making its way through Mexico, headed for the southern border, was organized by leftist organizations and financed by Venezuela.”

And who runs Venezuela?  Well, “(Venezuelan Pres.) Nicolas Maduro doesn’t really matter. He is simply a useful idiot, the puppet of those who really control Venezuela: the Cubans, the drug traffickers…” (From The Atlantic --NO LESS!—not exactly a right-wing Cuban-American tabloid.)

“(Now) We have people who understand the cause, and not just the symptoms, of the problems in Latin America, — not all the problems — and that is Cuba,” clarifies Otto Reich, who served in foreign policy positions for Reagan and Bush 41 and 43. “The United States has been a fire brigade in Latin America for the last 60 years and we have ignored, to a large degree, the arsonist,” Reich continues.

“Look at Venezuela today. The Cubans run the military intelligence systems, strategic comms, the voter rolls, the ports, airports, counter-intelligence police. In Nicaragua, it’s practically the same thing. They’re supporting [Nicaragua President Daniel] Ortega. The Cubans are in Bolivia supporting Evo Morales, and they were supporting the violence in Colombia, in Argentina and in Brazil.”

In brief, during Thursday’s Miami speech, Bolton was spot-on. He plumbs the “root-cause” of many of our nation’s problems with Latin America. This root-cause lies in the intelligence and secret police headquarters of  mass-murdering, terror-sponsoring, drug-smuggling Castro regime.

Naturally, shrieks of “HATE-SPEECH!” and “RACISM!” are issuing from Democrats against Republican gubernatorial candidate Ron DeSantis and his Cuban-American running mate - Jeanette Núñez—and their Cuban-American supporters.

Never mind that the longest-suffering black political prisoners in the modern history of the Western Hemisphere, suffered their jailings and tortures at the hands of the regime (Castro’s) that many Democrats have historically supported.

“Fidel Castro first and foremost is and always has been a committed egalitarian. He wanted a system that provided the basic needs to all -- enough to eat, health care, adequate housing and education. Cuba has superb systems of health care and universal education…We greeted each other as old friends.” (Jimmy Carter, also known as the Democrat Party’s “Elder Statesman.”)

“The negro is indolent and lazy, and spends his money on frivolities and drink.  He has maintained his racial purity by his well known habit of avoiding baths,” snickered the man (Che Guevara) who Obama held his heart in front of during his Havana selfie.

In fact, many Cuban blacks suffered longer incarceration in Castro and Che’s dungeons and torture chambers than Nelson Mandela suffered in South Africa's (relatively) comfortable prisons. In fact, these Cubans qualify as the longest-suffering political prisoners in modern history. Eusebio Penalver, Ignacio Cuesta Valle, Antonio Lopez Munoz, Ricardo Valdes Cancio, and many other Cuban blacks suffered almost thirty years in Castro's prisons. These men (and many women too, by the way, black and white) suffered their tortures 90 miles from U.S. shores.

But you’ve never heard of them, right? And yet from CNN to NBC, from Reuters to the AP, from ABC to NPR, Castro’s Stalinist-Apartheid fiefdom hosts an abundance of U.S. and international press bureaus and crawls with their intrepid “investigative reporters.”

On the other hand, you can’t swing a dead cat in the media without hitting the name Nelson Mandela. Interesting how that works.