Cuba’s “Transition” is Fake News with Bells On

Humberto Fontova
|
Posted: Apr 21, 2018 12:01 AM
Share   Tweet
The opinions expressed by columnists are their own and do not necessarily represent the views of Townhall.com. 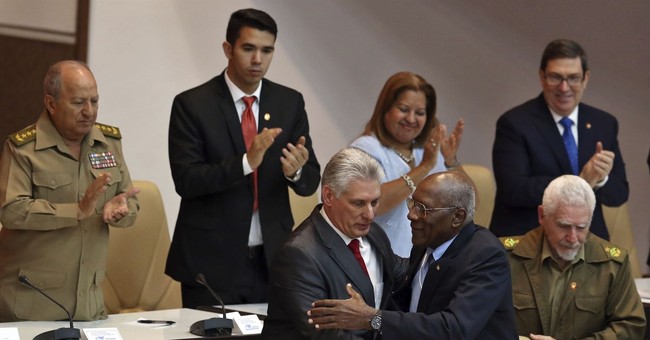 Castro's (unregistered) agents-of-influence are frantically busy this week thanks to their (unregistered) accomplices in the Fake News Media. All claim an earth-shaking "transition" is underway in Cuba!

Needless to add, according to these (unregistered) foreign agents, President Trump should promptly avail himself of this golden opportunity to embrace those harmless, innocent, free- health-care providers that U.S. policy has unjustly and vicariously “bullied” for ‘lo so many years.

Could anything be more transparently facetious and idiotic? To quote the late Joan Rivers: “Can we talk?”

In fact, what’s happening as Cuban “President” (dictator) Raul Castro “steps down” in favor of Cuban “President” (puppet) Miguel Diaz-Canel is about what happened when Korean “President” Kim Jon-il stepped down in favor of his son Kim Jon-un—except that Korea’s Kim Jon- Il actually kicked the bucket before his son fully took over the reins of the mass-murdering, terror-sponsoring, nuke-rattling regime.

In fact, much of the vital day to day functions of the Stalinist regime will remain in the hands of Raul Castro’s son Alejandro Castro-Espin, a KGB-trained colonel in Cuba’s secret police and a fanatical Stalinist. Alejandro denounces to the U.S. as “an Empire of Terror!” and shrieks that “Cuba will never return to capitalism!”

As proof of Alejandro’s (secret) eminence and importance within the Stalinist regime, he was the person actually in charge of the “negotiations with” (demands upon) the Obama administration back in 2014. Nothing was more vital for the Castro-Family-Crime-Syndicate than securing and growing that multi-billion $dollar lifeline from the U.S. So naturally fanatical Stalinist and secret policeman Alejandro was put in charge of securing and protecting this flow through the Stalinist regime’s jugular.

And naturally Castro’s (unregistered) agents-of-influence kept this explosively embarrassing item very hush-hush, with the ever loyal and time-honored assistance of their (unregistered) accomplices in the Fake News Media. To hear them tell it, Pajama- Boy Ben Rhodes was harmlessly “negotiating” with other harmless Cuban Pajama-Boy diplomats. But here’s the ugly proof otherwise.

Oh, I know. I know. The Fake News media keeps harping about the big-bad-bully U.S. “embargo” against harmless, innocent free-healthcare-provider Cuba. But in fact:

The annual cash flow from the U.S. to Cuba for almost the past decade (mostly in remittances and travel expenses after Obama opened the spigot) exceeds what the Soviets used to send Cuba at the height of their sponsorship back in the 1970’s and 1980’s. In brief, thanks to Obama, the U.S. became Cuba’s new Sugar Daddy—and just in the nick of time. President Trump has closed this economic lifeline only slightly. We’ll see what happens now with the clear-eyed on Castroism Pompeo and Bolton in charge.

The Stalinist regime’s other vital functions (ever more money- making) will also remain closely within the Castro family. To wit:

Cuba qualifies as a police-state, as a military-dictatorship and as dynasty-ruled in the most genuine sense of these terms—which explains why you never hear it called as such by the mainstream media.

With this tourist revenue windfall, ongoing for almost two decades, Cuba’s Castro family and their military robber baron cronies are making a killing. Why would they voluntarily upset their own apple carts by retiring? They might “retire” from the stage—but they’ll still be pulling the wires from behind it.

But perhaps all this talk of unregistered Castro agents and their cronyship with the Fake News Media strikes some of my amigos as unnecessarily hyperbolic? Or perhaps even untrue? Fine let’s have a look at just one example from this week:

This week The Washington Post (among many other mainstream media luminaries) quoted a certain Cuba “expert” named Arturo Lopez-Levy. They always bill him as an innocuous “U.S. academic.” In fact, his real name is Arturo Lopez-Calleja, and he’s a cousin of the aforementioned Luis Alberto Rodríguez López-Calleja, Raul’s son-in-law who runs GAESA, the corporation that runs most of Cuba’s industry.

Despite their fetish to consult and quote him, no mainstream media outlet has ever mentioned Arturo Lopez-Callejas’ kinship with Cuba’s dictator, much less his closer kinship with the Cuban dictator’s son-in-law—or even this son-in-laws position as overlord of the Castro regime’s business monopoly over Cuba’s tourist industry.

In brief: the head of Castro’s tourism industry, through the good offices of the U.S. mainstream media, has his cousin constantly lobbying for more U.S. travel to Cuba. And the U.S. public for the most part remains utterly oblivious to his background and possible motives, much less to what their expenditures in Cuba mean to the Cuban people’s prospects for freedom and for U.S. national security.

”We don’t need no ‘stinkin registration with the U.S. justice Departments as agents of a foreign government!” could well be the chuckle of Castro’s U.S. agents--and for going on half a century now.

Oh!....and speaking of the Washington Post. Did I mention that the WaPo’s Latin American correspondent and “transnational crime” reporter Nick Miroff is married to an apparatchik of the Castro regime named Camila Harnecker? Well she is the daughter of the founder of the Castro regime’s military intelligence (G-2) apparatus. This notorious KGB-protégé, Che Guevara-chum and Stalinist torturer was named Manuel “Barbaroja” (Red Beard) Pineiro.

Just thought you should know.