Humberto Fontova
|
Posted: Nov 18, 2017 12:01 AM
Share   Tweet
The opinions expressed by columnists are their own and do not necessarily represent the views of Townhall.com. 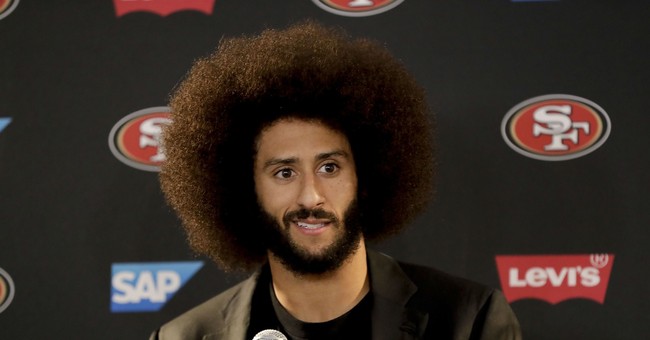 “He knelt during the playing of our national anthem. And he did it for a clear reason, one that has been lost in the yearlong storm that followed. He did it to protest systemic oppression and, more specifically, as he said repeatedly at the time, police brutality people toward black people.” (The editors of GQ magazine, explaining why they hail Colin Kaepernick as “U.S.Citizen of the Year.”)

“The only publication that speaks to all sides of the male equation, GQ is simply sharper and smarter.” (From GQ’s masthead.)

In fact, the (BLACK U.S.) citizen who U.S.-based GQ hails as "U.S. Citizen of the Year" idolizes the Racist/Stalinist who jailed and tortured the longest suffering BLACK political prisoners in the modern history of the Western Hemisphere-- and who craved and came closest to NUKING THE U.S.

“War against the U.S. is my true destiny!” Fidel Castro, April 1958, at a time, by the way, when the U.S. State Dept. and CIA were backing Castro’s terrorist group both morally and financially.)

“If the missiles had remained in Cuba, we would have used them against the very heart of the U.S., including New York City.” (Che Guevara, Nov. 1962.)

“Of course I knew the missiles in Cuba were nuclear-armed. That’s precisely why I urged Khrushchev to launch them against the U.S.!” (Fidel Castro to Robert McNamara, October 1992.)

Let the above sink in for a second--and remember that (New York-based) GQ's ultra-hipster editors all fancy themselves "ultra-educated"---by current standards.

In fact, “sharp and smart!” GQ’s “U.S. Citizen of the Year” hailed a dictator who jailed, tortured and murdered black political prisoners for such crimes as publicly quoting the works of Marin Luther King Jr. and the U.N. Declaration of Human Rights. Fidel Castro’s murder toll (for political crimes) is estimated at close to 100,000.

“The negro,” sneered Fidel Castro’s sidekick Che Guevara, “is indolent and lazy, and spends his money on frivolities and drink, whereas the European is forward-looking, organized and intelligent.”

But have you ever heard any of their names mentioned by the U.S. media? Eusebio Penalver became a U.S. citizen and lived in Miami for almost 20 years. He would have been a cinch for the media to track down. Ever see a CNN interview with any of them? Ever see any of them on "60 Minutes"? Ever read about them in The New York Times? CNN?  Ever hear about them on NPR during Black History Month? Ever seen anything on them on the History Channel or A&E? Ever hear the NAACP or Congressional Black Caucus mention them?

Why do I bother asking? They were (are) victims of the Left's premier pin-up boys.

Just last year black activist Roberto Rivalta Junco died from maltreatment in Castro’s dungeons. Did the Fake News Media (much less GQ magazine) inform you of any of this racist repression on our very borders? And yet Cuba hosts media bureaus from CNN to ABC and from the AP to NBC. I sure recall how these media outlets reported exhaustively on racist repression when it took place 8,000 miles away (Apartheid South Africa.)

Answer; when his tortures were inflicted by the Left’s premier pin-up boys, that’s when.

Three years ago while Antunez suffered in Castro’s prisons his sister (today living in the U.S.) declared: "The Cuban government tries to fool the world with siren songs depicting racial equality in our country. But it is all a farce, as I and my family can attest, having suffered from the systematic racism directed at us by Castro's regime. My brother suffers the scourge of racial hatred every day. The beatings are always accompanied by racial epithets. They set dogs on him. They deny him medical attention. They kept him from attending his mother's funeral. The only thing I have to thank the Cuban revolution for," she quoted her brother, “is for restoring the yoke of slavery that my ancestors lived under.”