Humberto Fontova
|
Posted: Sep 02, 2017 12:01 AM
Share   Tweet
The opinions expressed by columnists are their own and do not necessarily represent the views of Townhall.com. 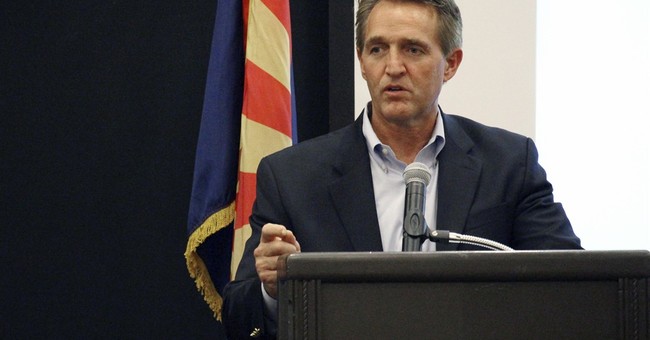 “Regarding the Arpaio pardon, I would have preferred that the President honor the judicial process and let it take its course,”  Jeff Flake on Twitter.

Well, this very judicial process also convicted a Cuban terrorist/spy named Gerardo Hernandez for –among other crimes--conspiracy to murder U.S. citizens. The judicial process so revered by Jeff Flake then sentenced the Cuban terrorist to two consecutive life terms. In fact, these convictions were upheld all the way to the Supreme Court.

Yet Sen. Jeff Flake was a gleeful accessory to Obama’s pardon (by any other name) of this communist spy/murderer/terrorist and his release back to Cuba as a conquering hero.

You see, amigos:  among Castro’s demands for the privilege of being allowed to inflict brain damage, permanent hearing loss, and lord knows what else on U.S. diplomats while sheltering the FBI’s most-wanted cop-killers and while being deluged with $BILLIONS upon $BILLIONS of U.S. dollars by Obama--among the snickering Castro’s demands for enjoying this financial and propaganda windfall from Obama was Obama’s immediate release of his KGB-trained spy/terrorist/murderer Gerardo Hernandez—“and plenty pronto!”

Sen. Jeff Fake served as President Obama’s Republican “point-man” (a white “house negro,” of sorts) on this Cuba “opening” (i.e. capitulations.)  This means Flake essentially served as Obama’s public-relations accessory to the release of the Communist murderer from prison and his return to Cuba as a conquering hero.

According to the FBI’s affidavit, the charges against Hernandez and his Cuban spy colleagues included:

*Gathering intelligence against the Boca Chica Air Naval Station in Key West, the McDill Air Force Base in Tampa and the headquarters of the U.S. Southern Command in Homestead, Fla.

* Compiling the names, home addresses and medical files of the U.S. Southern Command’s top officers, along with those of hundreds of officers stationed at Boca Chica.

* Infiltrating the headquarters of the U.S. Southern Command.

On Raul Castro’s orders Gerardo Hernandez also infiltrated the Cuban-exile group Brothers to the Rescue, who flew unarmed Cessnas to rescue Cuban rafters in the Florida straits, also known as “the cemetery without crosses.” Estimates of the number of Cubans who have died horribly there run from 30,000 to 50,000. Brothers to the Rescue often would drop flowers into the sea for those they had been unable to rescue.

These pilots risked their lives almost daily, flying over the straits, alerting and guiding the Coast Guard to any rafters and saving thousands of these desperate people from joining that terrible tally.

In sharp contrast to these Castroite Cuban horrors, pre-Castro Cuba was swamped with more immigrants per capita —primarily from Europe-- than was the United States. In fact—despite, the freedom to emigrate from Cuba virtually at will and obtain U.S. visas virtually for the asking--more Americans then lived in Cuba than did Cubans in the U.S. In fact, during the 1950s and based in Florida, Sheriff Joe Arpaio would have been lonelier and more bored than the Maytag repairman. I’m gonna go out on a limb here and guess you haven’t heard that eye-opening (and factual) datum mentioned in the FAKE NEWS media.)

In February 1996, Castro agent Gerardo Hernandez fulfilled his spy-mission by passing the flight plan to Castro for one of the Brothers’ humanitarian flights. With this information in hand, Castro’s top guns saluted and sprang to action. They jumped into their MiGs, took off and valiantly blasted apart (in international air space) the utterly defenseless Cessnas. Four members of the humanitarian flights were thus murdered in cold blood. MiGs against Cessnas, cannons and rockets against flowers.

Three of these murdered men were U.S. citizens, one a decorated Vietnam veteran. The other was a legal U.S. resident.

Castro’s spy, Gerardo Hernandez, was shortly uncovered and convicted in U.S. federal court of conspiracy to commit murder and the conviction was upheld all the way to the Supreme Court.

An especially repulsive aspect of Obama’s appeasement of Castro is that for months prior to the release of the Castroite murderer, the families of the Americans he murdered were repeatedly assured by Obama’s State Dept. that no such shameful deal would ever take place. Often Obama’s people made this promise face to face with the grieving families, as documented in this video where Congresswoman Ileana Ros-Lehtinen confronts Obama’s State Dept. with their bald-faced lies and relentless treachery against U.S. citizens. Apparently Hillary Clinton’s Benghazi testimony was not an isolated incident of Obama administration treachery.

Throughout the entire nauseating deal with the mass-murdering, terror-sponsoring Castro Family-Crime-Syndicate Sen. Jeff Flake stood shoulder to shoulder with Obama and his team of lying, sniveling “negotiators.”