Humberto Fontova
|
Posted: Jan 28, 2017 12:01 AM
Share   Tweet
The opinions expressed by columnists are their own and do not necessarily represent the views of Townhall.com. 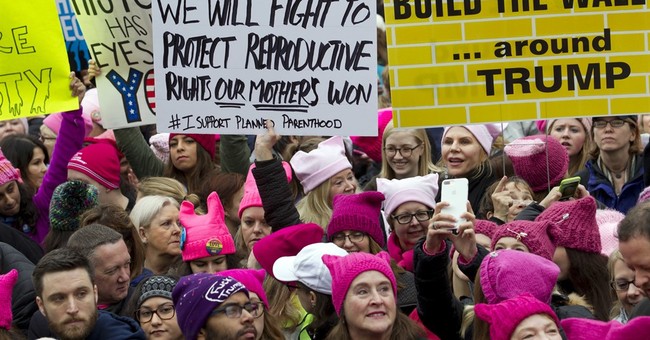 “I like what Che Guevara represents.” (Madonna interview with Italy’s Top of the Pops, 2002.)

Rock -star Madonna—who headlined the Women’s March while surrounded by women, blacks –and especially–black women-- has often expressed her affection for Che Guevara. Her fondness for the co-founder of a totalitarian regime that outlawed rock music while jailing and torturing the most blacks and women in the modern history of the Western Hemisphere included Madonna’s tweeting the psychopathic mass-murderer and war-monger a “Happy Birthday!”  last year.

To her credit, Madonna only fantasized about “blowing up the White House.”  Her “revolutionary icon,” on the other hand, craved to nuke all of New York City.

Vintage Stalinist Angela Davis also headlined the Women’s March. Her devotion to the war-mongering mass-murderers  Fidel Castro and Che Guevara dates back decades—back to the Peace & Love years , when so many  other  “peace-niks” and “flower-children” were similarly smitten.

“Fidel is the leader of one of the smallest countries in the world, but he has helped to shape the destinies of millions of people across the globe.” (Castro-worshipper and vintage Stalinist Angela Davis.)

Yoko Ono–famous peace-nik, women’s rights activist and Beatle-wife— also made the scene at Women’s March. Here you’ll find here worshiping the co-founder a regime that  tortured the most women political prisoners in the modern history of the Western hemisphere, that brought the world closest to nuclear war, and that criminalized Beatles music.

But enough irony. Let’s get down to business:

The regime co-founded by the idols of Women’s March headliners jailed and tortured 35,150 Cuban women for political crimes, a totalitarian horror utterly unknown—not only in Cuba—but in the Western Hemisphere until these icons of American “Women’s Rights Activists” assumed absolute power. Some of these Cuban ladies suffered twice as long in Castro’s Gulag as Alexander Solzhenitsyn suffered in Stalin’s.

Their prison conditions were described by former political prisoner Maritza Lugo. “The punishment cells measure 3 feet wide by 6 feet long. The toilet consists of an 8 inch hole in the ground through which cockroaches and rats enter, especially in cool temperatures the rat come inside to seek the warmth of our bodies and we were often bitten. The suicide rate among women prisoners was very high.” When suffering their tortures most of these women were in their 20’s.

Murder on video hardly started with ISIS. The ones above on the orders of Che Guevara and Fidel Castro date from 1959. Some of Fidel Castro and Che Guevara’s murder victims were women much younger than Madonna at the start of her illustrious career.

On Christmas Eve of 1961 a young Cuban woman named Juana Figueroa Diaz spat in the face of the executioners who were binding and gagging her. Castro and Che’s Russian-trained secret police had found her guilty of feeding and hiding “bandits” (Cuban rednecks who took up arms to fight the Stalinist theft of their land to build Soviet –style Kolkhozes.) When the blast

Thousands of Cuban women have drowned, died of thirst or have been eaten alive by sharks attempting to flee the horrors imposed on the Cuban people by the icons of the Women’s March.” This from a nation formerly richer than half the nations of Europe whose citizens considered the U.S. their “vacation playground.” Yes in 1953 more Cubans vacationed (then voluntarily returned home) from the U.S. than Americans vacationed in Cuba.

Alas! The above item doesn’t appear in Godfather II so it’s mostly unknown to Americans.

How these women survived years and even decades of such horrors then “took charge of their lives” and “got their groove back,” might seem newsworthy and inspirational. Indeed their stories fairly epitomize the most popular themes of women’s chat shows. You can almost hear Gloria Gaynor’s “I Will Survive” as Joy Behar and Whoopie Goldberg greet these long-suffering--but somehow-surviving--Cuban ladies on stage with a standing ovation, sniffles and teary hugs.

HAH!  Instead, “the national media has never shown the slightest interest in any of our stories,” shrugs Caridad Roque from Miami today. Ms Roque was arrested by Castro’s KGB- trained police at the age of 19 and suffered 16 years of prison and torture in Cuba.