Humberto Fontova
|
Posted: Oct 01, 2016 12:01 AM
Share   Tweet
The opinions expressed by columnists are their own and do not necessarily represent the views of Townhall.com. 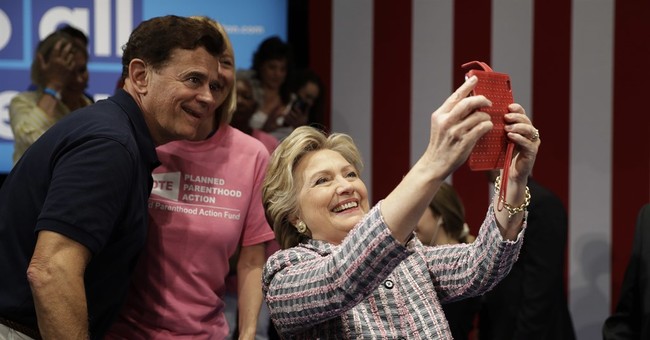 “Documents show that the Trump Company spent a minimum of $68,000 for its 1998 foray into Cuba at a time when the corporate expenditure of even a penny in the Caribbean country was prohibited without U.S. government approval,” the story continues.

“(Trump) puts his personal and business interests ahead of the laws and the values (italics mine) and the policies of the United States of America,” promptly accused Hillary Clinton.

To quote the late Joan Rivers, “can we talk?” Good. Ok, first off:

When Rolling Stone Keith Richard’s daughter was arrested for marijuana possession in 2011 did anyone expect Poppa Keith to morph into Ward Cleaver?  Did anyone expect him to deliver a stern lecture with warnings from Reefer Madness during a fireside chat?

Did we expect the father-daughter team to appear on Oprah sniffling and snuffling while recanting episodes of their misspent “youth.” Then exchanging teary hugs with the famous hostess?

Instead, the notorious father knew best. He kept his mouth shut and head high. Letterman and Leno’s writers--along with Oprah’s booking producers-- were (probably) left panting. Thus dignity and decorum were upheld (as such things are reckoned in this setting.)

In brief, any scoldings about drug use from poppa Keith would have given new meaning to the term “cringeworthy.” The sappiness and hypocrisy would have been unbearable even to America’s top connoisseurs of the grotesque (i.e. Oprah fans.)

Alas, no such notions of decorum or dignity constrain the Democrat-Media complex. Their sappiness and hypocrisy meters have long been defunct.  So they’re all over Donald Trump for trying to do business with the Castro regime—something they’ve been promoting from every pulpit for decades!

Anyone who has listened, even occasionally or cursorily, to the mainstream media or to Democratic press secretaries (but I repeat myself) over the past 30 years (and especially for the past ten) knows that, to these people, the quest for the Golden Fleece the Holy Grail and the Ark of the Covenant rate as feeble sideshows compared to their quest to end the (so-called) Cuba embargo.  To hear them, doing business with the Castro regime will cure everything from human-trafficking to cancer.

In brief, Trump’s “crime” consisted of this: back in 1998 (when the Clinton Administration in their push to end  the embargo, was urging American companies to partner with the Castro regime ) Trump Resorts and Hotels hired a consulting firm named Seven Arrows headed by Richard Fields to  explore the possibility of opening a hotel in Cuba. In other words, while unconvinced of its merit, Trump was willing to at least explore business opportunities then being promoted by the Clinton administration.

In fact, according to John Kavulich president of the U.S.-Cuba Trade and Economic Council “in the period of time (Richard) Fields was reportedly in Cuba on Trump’s behalf, numerous (U.S.) businesses – from the music industry to hoteliers -- traveled to Cuba to drum up business. Many were fully hosted by non-profit groups or non-U.S. business organizations or entities who fully paid the way of the U.S.-based business.”

In brief, if all of Newsweek’s allegations pan out, Trump’s crime consisted of his (briefly) hired consultant not properly camouflaging his Cuba trip expenditures in partnership with one of the many charities and non-profits then happily and busily doing this sort of thing mostly (if unofficially) on behalf of a Clinton administration initiative. In brief:  the equivalent in the eyes of normal middle-Americans of an expired brake tag.

The Newsweek- concocted and Democrat-promoted story came out only days after Trump finally got tough with Castro during a campaign stop in Miami’s Little Havana.  This toughness, by the way, was as simple as quoting—almost word for word-- a noted anti-communist Townhall author/writer. See if you agree:

“All of the concessions that Barack Obama has granted the Castro regime were done with executive orders, which means the next president can reverse them. And that is what I will do unless the Castro regime meets our demands.”  (Donald Trump, Miami, Fl. Sept 16, 2016.)

“Any U.S. President would care to actually study this low-profile issue he’d quickly discover that he’s got the Castros in a humiliating stranglehold …This economic lifeline from Obama to the Castro regime results from Obama’s executive orders.  This means that with a few strokes of his pen the next U.S. President could strangle the Castros. (Humberto Fontova, Townhall, March 12, 2016.)

(My invoice for “unacknowledged campaign consulting services” is on the way, Mr Trump–“FOR YOU!  $500 an hour.)

As it turns out (except for unprofessionally laundered expenses by his consultant) Trump never did a dime’s worth of business with the Castro regime. Apparently, after his consultant’s “explorations,” Trump discovered that what all those “crazy-right-wing-Cuban-American-hard-liners” say was exactly true. To wit: there’s no doing business with “Cuba” or with the Cuban people. You set up a business in Cuba you do it in partnership with Castro’s Stalinist regime, and most likely with some of the Castro family as majority owners.

So: “no way, Jose.” Was Trump’s answer both to the Castro Crime Syndicate and the Clinton administration, which-- it can’t be repeated often enough—was promoting these partnerships between American businessmen and Cuba’s Stalinist regime.

Florida, as all know, is a crucial swing state where Trump and Clinton are running neck to neck in the polls. Cuban-American voters are overwhelmingly Republican and known for turning-out to vote in yuuuuge percentages. So they appear vital to Trump’s election. So the timing of the Newsweek-concocted and Democrat-promoted story is hardly occult.

Your humble servant can only report that from what he’s seen and heard this “scandal” is not much affecting Trump’s Cuban-American support. Granted, given the tight Florida race just a small defection of Cuban-American Trumpistas could carry the day for Clinton.

But the notion that as a result of  a violation that probably strikes most people as the  equivalent of an expired brake-tag (i.e. didn’t effectively camouflage his consultant’s Cuba trip under a charity like all the others were doing at the time) the Cuban-Americans who currently support Trump will defect to Hillary Clinton seems highly unlikely.

Would Cuban-Americans suddenly defect to a candidate (Democrat no less!) who chummed up with Raul Castro’s Wife, Vilma, during the International Women’s Conference back in 1994? Would they suddenly support a candidate who pulled strings to get Raul Castro’s daughter Mariela a U.S. visa back in 2012-- and who presided as First Lady over the shanghaiing of Elian Gonzalez?

Such a thing strikes me as more unlikely then a teary –eyed Keith Richards on the Oprah Show.