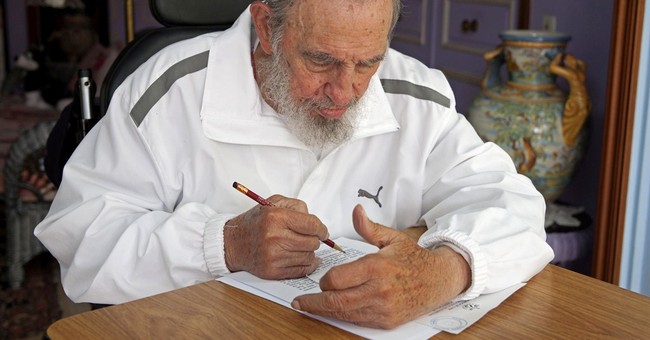 Imagine what ultra-sophisticated Washington Post writers think of people who believe their cancer can be cured by a “lying on of hands!” by the likes of Reverend Ike, Benny Hinn or the ghosts of Oral Roberts and Sister Aimee McPherson?

Well, here’s a Washington Post headline from this week:

“Americans could soon be thanking Fidel Castro for their revolutionary cancer drugs. Cuban immunologists made several other vaccination breakthroughs, including their own vaccines for meningitis B and hepatitis B…All this is even more impressive considering the crippling embargo that America has imposed on the island for half a century."

In fact, Hillbilly snake-handlers have better evidence for their beliefs than does the Washington Post for their faith in the claims of serial-liar Castro. Just ask any Cuba-watcher.

You’d really, really hope that at this stage of the game most people—especially “ultra-educated” and ultra-skeptical Beltway reporters—would display a soupcon of cynicism upon reporting proclamations from the Castro regime’s propaganda ministry. Let Ted Cruz, for instance, say that the sun rises in the east and the media is or all over him like a cheap suit. But let serial-liar Castro claim he’s found a cure for cancer and this same media surge to the front of the tabernacle eyes closed and arms raised in faithful ecstasy, eager and panting for his miraculous cure!

Cuba-Watchers have seen this movie before. A decade ago, for instance, Castro claimed to have invented a cancer vaccine. Owing much to the lobbying muscle and ingenuity of his (always-busy) U.S. agents-of-influence, in 2004 this vaccine, represented by a California-based company named Cancer ax, was indeed given an OFAC license for testing in the U.S.

But it never passed FDA approval and CancerVax Corp. went bankrupt. To date no country on earth licenses the use of Castro’s cancer-vaccine.

Indeed the Castro regime’s medical swindles are many and varied. The screening of Michael Moore’s Castroite infomercial titled Sicko a few years ago was a signal for the Stalinist regime’s other propaganda assets to chime in. “Cuba has developed the world’s first meningitis B vaccine, which is available in Third World countries but not in Europe or the United States due to U.S. sanctions,” reported (i.e. dutifully transcribed from Cuban propaganda ministry hand-outs) Anthony Boadle from Reuter’s Havana Bureau shortly after Sicko’s release in 2007.

Of this 27-word sentence by one of the world’s most respected news bureaus exactly 14 words were true. This vaccine was not available in the U.S. and Europe -- but hardly because of sanctions. In fact, in 1999, Bill Clinton’s Treasury Department granted the pharmaceutical giant, SmithKline Beecham, a license to market the Cuban vaccine in a joint venture with Castro’s medical ministry -- pending FDA approval.

And why not? Castro’s minister of public health himself, Carlos Dotres, had hailed the vaccine as “the only effective one in the world!” Highly impressed, Bill Clinton’s FDA chief, Dr. Carl Frasch, said it could annually prevent “1,000-2,000 cases” of the dreaded disease in the U.S., and 110 U.S. Congressmen promptly signed a special letter to Secretary of State Madeline Albright beseeching her to allow this breach of the diabolical U.S. embargo “if only to protect the lives of America’s children!”

That was 15 years ago. The reason the vaccine is not available today in the U.S. and Europe is simply that -- like so many other Castroite concoctions and proclamations dutifully trumpeted by news agencies that earn Havana bureaus and lobbyists who partner with mass-murderers-- the vaccine is a farce and its sale a swindle. And, at least in this case, most civilized countries refuse to help propagate the swindle on their citizens.

A 1999 study by Brazil’s Centro de Vigilancia Epidemiológica (Center for Epidemiological Research) seconded Dr. Raw: “The studies conducted on the use of the Cuban vaccine in children under four years old -- the major risk group for hepatitis B -- showed no evidence that the vaccine protected them against the disease. This vaccine should not be recommended.”

The Washington Post boasts a long history of affection for the Castro regime. Cliff Kincaid of Accuracy in Media was an eyewitness to an eye-opening demonstration of this warm relationship. Here we’ll turn over the floor to him:

“When Lawrence Stern, the national news editor of The Washington Post, passed away in 1979, Reed (Irvine, founder of Accuracy in Media) asked me to attend and observe his memorial service. I was astounded when a man identified as Teofilo Acosta was introduced and told the service: “I’m from Cuba. I am Marxist-Leninist. I am human. Larry Stern was my friend, one of my best friends. I loved him.” Acosta was publicly known as a First Secretary in the Cuban Interests Section that has been set up inside the Czech Embassy in Washington. In reality, he was a Cuban intelligence agent."

Kincaid then saw Washington Post Executive Editor Ben Bradlee warmly greet The Cuban Intelligence officer and repeatedly refer to him by his first name. At these services the KGB-trained Cuban spy Acosta hailed Stern as "one of my best friends." The London Daily Telegraph of September 3rd, 1979 quoted Teofilo Acosta boasting of “having a number of U.S. Senators and Congressmen in my pocket."

To say nothing of U.S. newspapers.
Trending Townhall Video

Did Team Biden Even Consider the Optics of This Moment During Florida Trip?
Townhall
Tweeter risks wrath of some of America's most privileged lib journos in order to expose their efforts to hide their backgrounds from the public; UPDATED
Twitchy
Supreme Court to Hear Case of Man Who Got Four Days in Jail for Mocking a Police Department on Facebook
Redstate
I Know the Woke Military's Dirty Little Secret
PJ Media