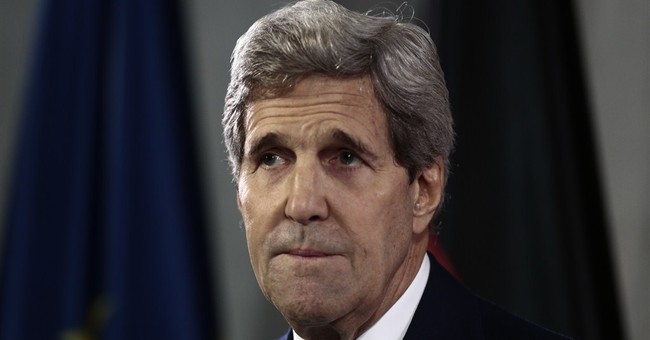 "Already we are seeing nations large and small stepping up in impressive ways to make a contribution on the frontlines…Cuba, a country of just 11 million people, has sent 165 health professionals and it plans to send nearly 300 more.” (U.S. Sec. of State John Kerry as quoted by Reuters, Oct. 17)

“Jorge Perez, (Communist medical apparatchik) said he received a "boost" from the (Kerry) comment and he believed Kerry was pressing other countries to follow Cuba's lead,” the Reuters story continues.

Does it occur to the top diplomat of the world’s most powerful-nation that a Stalinist regime his own State Department classifies as a Terror-Sponsor, that used poison nerve gas (Sarin) against anti-Soviet Africans in Angola, that jailed and tortured the longest suffering black political prisoners in modern history, that tortured its own subjects at a higher rate than Stalin’s, whose own subjects suffer the highest suicide and (attempted) emigration rates on earth –that such a regime might have more in mind than the welfare of African Ebola-sufferers?

“U.S. CDC (Center for Disease Control) and Cuban health officials sat together in Havana on Wednesday to discuss Latin America's response to Ebola…The CDC is one of the U.S. agencies with a record of sending representatives to Cuba and hosting Cuban medical officials in the United States.” (AP, Oct. 29.)

Does it occur to the top diplomats of the world’s most powerful nation to question the health figures and medical qualifications put out by a propaganda ministry founded and mentored by the KGB? Might these U.S. diplomats deign to question items that issue from the propaganda ministry of a nation ravaged by infectious diseases (Dengue fever, for one) unknown in Cuba since 1900 and where the average height of Cubans has decreased by 8 centimeters in the past 25 years due to nutritional deficiencies?

First off, the very dispatch of Cuban “health professionals” to West Africa amounts to a form of human trafficking. Chances are they had no say in the matter. In case the ultra-educated (many Ivy-League) U.S. diplomatic corps have forgotten: those Cubans are the hapless subjects of a totalitarian regime.

According to a report by the Association of American Physicians and Surgeons, more than 75% of “doctors” with Cuban “medical degrees” who make it to the U.S. flunk the exam given by the Educational Commission for Foreign Medical Graduates for licensing in the U.S. Most Cuba-certified doctors even flunk the Educational Commission for Foreign Medical Graduates’ exam for certification as “physician assistants,” making them unfit even as U.S. nurses. None of this is meant to disparage these hapless men and women who were simply cursed by fate to be born under a Stalinist tyranny. And please don’t accuse me of disparaging all those hard-working and capable U.S. nurses. Just putting out some facts.

Reports recently smuggled out of Cuba indicate that these hapless “medical professionals” dragooned to west Africa by the Castro regime are being warned they will not be allowed back into Cuba if they contract Ebola. Furthermore the Castro regime magnanimously takes out a health insurance policy on them through the World Health Organization—but names itself (the regime) the beneficiary instead of the hapless subject’s family!

Can you even begin to imagine the international media uproar if, say, Israel tried pulling a similar stunt?!

More fascinating still: The Associated Press story quoted above was written by a correspondent named Andrea Rodriguez and quotes a U.S. “Cuba expert” from the Council on Foreign Relations named Julia Sweig. You certainly won’t read this anywhere within the MSM, amigos. So please pay careful attention:

*Associated Press correspondent Andrea Rodriguez has been outed in a samizdat smuggled out of Cuba by a Cuban dissident as being married to a secret-police agent of the Castro regime.

* And The Council on Foreign Relations’ Julia Sweig promotional services for the Castro regime reached a level where the U.S. Defense Intelligence Agency’s top Cuba spycatcher, Chris Simmons (now retired), named her a full-fledged Cuban “Agent of Influence.” In the very acknowledgements to her book Inside the Cuban Revolution, Ms Sweig thanks—“for their warmth, for their friendship, for opening Cuban doors and championing her project ”-- Elsa Montero Jose Gomez Abad, Ramon Sanchez Parodi, Jose Antonio Arbesu, Fernando Miguel Garcia, Hugo Ernesto Yedra and Josefina Vidal. Every one of these Cubans has been identified by retired Lieut. Col. Chris Simmons as KGB-trained Cuban agents.

I haven’t checked Guinness, but effusively thanking the warm support of 7 different spies from a Terror-Sponsoring enemy nation in your book’s acknowledgements-- three of whom were expelled from the U.S. for terrorism and/or espionage-- must be some kind of record, at least for someone outside a maximum-security federal prison.

Alas, this is business as usual for what most Americans (including our crackerjack diplomats and intelligence analysts) read about Cuba in the MSM. And apparently our crackerjack State Department and CIA—true to tradition—can’t be bothered with the truth about Cuba. Regarding that glorious tradition:

“Fidel Castro is not only not a communist –he’s a strong anti-Communist fighter. He’s ready to help us in the hemisphere’s anti-communist fight and we should share our intelligence with him.” (CIA Cuba “expert” Frank Bender, April, 1959.)

By the way, Raul Castro had been assigned a KGB handler since his visit to the Soviet Bloc in 1953. And when arrested in Mexico in 1956, Ernesto “Che” Guevara was found to have, in his very wallet, the calling card of the KGB’s top Latin American agent, Nikolai Leonov. Many Cubans knocked on many Washington doors trying to get this across. Obviously to no avail.

These Cubans were crude “right-wingers,” you see, too reminiscent of that insufferable Joe Mc Carthy who had so recently sullied the hallowed halls of Washington D.C. with his defamations. These Cuban Cassandra’s were thus lepers in the eyes of CIA and State Department sophisticates.

“Nothing but refugee rumors,” sneered President Kennedy’s National Security (italics mine)advisor, Mc George Bundy (a former Harvard Dean) on ABC’s Issues and Answers on October 14, 1962. He was reacting to some crackpot claims of Soviet Missiles in Cuba. “Nothing in Cuba presents a threat to the United States,” continued the Ivy League luminary, barely masking his scorn for these crude, hot-headed and deceitful Cuban refugees, who were already skewing Republican. “There’s no likelihood that the Soviets or Cubans would try and install an offensive capability in Cuba,” he scoffed.

“There’s fifty-odd-thousand Cuban refugees in this country,” sneered President Kennedy himself the following day, “all living for the day when we go to war with Cuba. They’re the ones putting out this kind of stuff.”

Exactly 48 hours later, U-2 photos sat on President Kennedy’s desk revealing those “refugee rumors,” sitting in Cuba alongside their nuclear warheads and pointed directly at Bundy, JFK and their entire staff of sagacious Ivy League wizards.