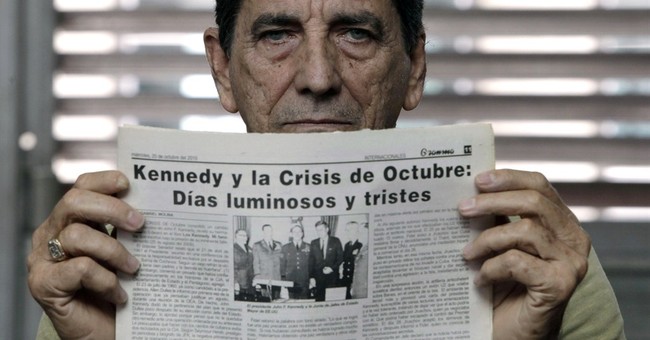 Imagine ISIS raising its flag over Bagdad and Damascus, the U.S. scooting from its bases in Saudi Arabia and the history books and media all hailing President Obama as a peer to Richard the Lionheart and El Cid. Crazier things have happened.

Take JFK and the Cuban Missile Crisis. Imagine an Obama Presidency--but with only Chris Matthews, Chuck Todd and Rachel Maddow “reporting” on TV and only Paul Krugman and Nicholas Kristof scribbling. No Fox News. No Rush. No Mark Levin. No Glenn Beck. No internet. That’s what John F. Kennedy enjoyed.

Hard as it might be for those who weren’t around at the time (or those with short memories) to imagine, only in his sweetest dreams can President Obama envision the slobbering love affair the media carried on with President Kennedy. That Khrushchev swept the floor with Kennedy during the Cuban Missile Crisis was the mainstream conservative conclusion throughout much of the Cold War. Nixon and Goldwater, for instance, represented opposite poles of the Republican establishment of their time.

"Kennedy pulled defeat out of the jaws of victory,” wrote Richard Nixon. "Then gave the Soviets squatters rights in our backyard."

In fact Khrushchev prepared to yank the missiles before any “bullying” by Kennedy. “What!” Khrushchev gasped on Oct. 28th 1962, as recalled by his son Sergei. “Is he (Fidel Castro) proposing that we start a nuclear war? That we launch missiles from Cuba?”

Kennedy's deal with Khrushchev cut this lifeline. Think about it: here's the U.S. Coast Guard and Border patrol working 'round the clock arresting Hispanics in the U.S. who are desperate to return to their native country.

This ferocious guerrilla war, waged 90 miles from America's shores, might have taken place on the planet Pluto for all you'll read about it in the MSM and all you'll learn about it from Kennedy’s court scribes, who scribbled Kennedy’s “victory.” To get an idea of the odds faced by those betrayed Cuban rebels, the desperation of their battle and the damage they wrought, you might revisit Tony Montana during the last 15 minutes of "Scarface."

It's a tribute to the power of Castroite mythology that, even with all this information a matter of public record for almost half a century the academic/media mantra (gloat, actually) still has Castro, "defying ten U.S. Presidents!" Instead he’s been protected by them.