“Axis of Evil" Alive and Well (Right Off Our Coast) 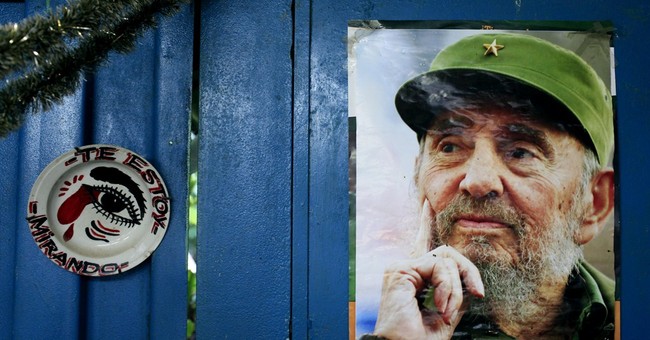 “Foreign reporters -- preferably American -- were much more valuable to us at that time (1957-59) than any military victory. Much more valuable than recruits for our guerrilla force, were American media recruits to export our propaganda." (Che Guevara 1959)

“Reporters in Havana are either insensitive to the pain of the opposition “or in clear complicity” with the government.” (Cuban torture-victim Jorge Luis García Pérez known as Antunez in the Miami Herald 8/7/2013)

Note the time span between the quotes above. Few propaganda recruitment drives and PR campaigns in modern history have been as phenomenally successful or as enduring as those of Fidel Castro and Che Guevara.

During the past few weeks, for instance, the Castro regime was caught red-handed shipping a huge tanker-load of illegal weapons (including missile equipment) to North Korea, a fleet of Russian warships visited Havana, Cuba’s vice president visited Iran to “expand ties,” Cuba’s vice foreign Minister visited Pyongyang to foment "closer cooperation," and Amnesty International decried the wave of terror against Cuban dissidents, naming five of them as “prisoners of conscience.”

But a quick Cuba news scan will show that the top Cuba item reported in the U.S. during the period was about a paddleboarder who went from Havana to Key West to “promote peace, love and friendship between the peoples of Cuba and of U.S.” This week birthday greetings to Fidel Castro on his 87th filled the media bucket.

Castro jailed political prisoners at a higher rate than Stalin during the Great Terror, murdered more Cubans in his first three years in power than Hitler murdered Germans during his first six and came closest of anyone in history to starting a worldwide nuclear war. In the above process he converted a nation with a higher per-capita income than half of Europe and a huge influx of immigrants into one that repels Haitians and boasts the highest suicide rate in the hemisphere.

Who would guess any of this from reading the mainstream media?

In 1990 Castro’s KGB-trained secret police arrested black Cuban dissident Antunez (quoted above) and Castro’s kangaroo courts sentenced him to 17 years in prison. His crime was shouting anti-Castro slogans in public. Black Cuban doctor Oscar Biscet was sentenced to 25 years in Castro’s torture chambers for the crime of reciting the works of Martin Luther King and the UN Declaration of Human Rights in a Cuban public square. This “crime” was greatly compounded by Dr. Biscet’s specifically denouncing the Castro regime’s policy of forced abortions (which account for those “low infant-mortality” figures, much-trumpeted by such as Michael Moore and the Congressional Black Caucus.)

But you’ve never heard of them, right? And yet from CNN to NBC, from Reuters to the AP, from ABC to NPR, Castro’s fiefdom hosts an abundance of U.S. and international press bureaus and crawls with their intrepid “investigative reporters.”

According to anti-apartheid activists, a grand total of 3,000 political prisoners passed through South Africa’s Robben Island prison in roughly 30 years under the Apartheid regime. Usually about a thousand were held. These were out of a South African population of 40 million.

According to Freedom House, a grand total of 500,000 political prisoners have passed through Castro’s various prisons and forced labor camps. At one time in 1961, some 300,000 Cubans were jailed for political offenses. This is out of a Cuban population in 1960 of 6.4 million. A quick punch of a calculator will easily reveal the grotesque disparity in repression between the two regimes. A quick scan of the media will reveal the grotesque disparity of condemnation applied to the (relative) molehill instead of to the mountain.

In 1964, the government of apartheid South Africa sentenced Nelson Mandela to 30 years in prison. Mandela’s trial was conducted by an independent judiciary and witnessed by scores of international observers. The charges against Mandela included: "The preparation, manufacture and use of explosives, including 210,000 hand grenades, 48,000 anti-personnel mines, 1,500 time devices, 144 tons of ammonium nitrate, 21.6 tons of aluminum powder and a ton of black powder. 193 counts of terrorism committed between 1961 and 1963."

"The (Mandela) trial has been properly conducted," wrote correspondent for the London Observer Anthony Sampson, (who later wrote Mandela's authorized biography.) "The judge, Mr Justice Quartus de Wet, has been scrupulously fair." Antunez, Biscet and thousands of other Cubans were condemned by a judicial system founded by Felix Dzerzhinsky during Lenin’s Red Terror, perfected by Andrei Vishinsky during Stalin’s Great Terror and transplanted to Cuba in 1959 by their “Latino” disciples. “Judicial evidence is an archaic Bourgeios detail,” Che Guevara stressed to his prosecutors. “When in doubt --execute.” “Legal proof is impossible to obtain against war criminals,” Fidel Castro explained to Time Magazine in February 1959. “So we sentence them based on moral conviction.”

These “executions” (murders, technically) would surpass Hitler’s during the Night of the Long Knives and the rate of jailings would exceed Stalin’s during his Great Terror, to say nothing of South Africa’s during Apartheid.

And yet the “injustice” against Nelson Mandela is a media cause célèbre. But most of you have never heard of Antunez, Biscet or any of those hundreds of other black Cuban political prisoners. Why?

The quotes heading this article probably explain it best.