John Kerry and Chuck Hagel -- Are You Watching? 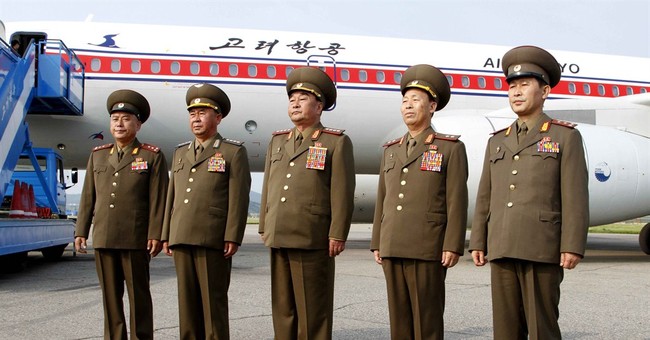 A North Korean ship trying to sneak missiles through the Panama Canal after leaving Havana was seized by Panamanian authorities this week. Somebody tipped off the Panamanians that the vessel was carrying illegal drugs.

Instead, while searching under sacks of Cuban sugar, the Panamanians found the ship crammed with missiles and mucho military contraband. (Nuke-rattling North Korea has been under a UN arms embargo since 2006.)

Upon getting caught red-handed, the ship’s North Korean captain and crew went berserk. The hysterical captain was crippled by a heart-attack, then tried committing suicide by slitting his throat. The crew ran amok sabotaging the ships unloading cranes and battling with the Panamanian police in the best Bruce Lee, Jackie Chan and Seven Samurai manner.

No fatalities were reported, and the crazed Koreans were eventually subdued, arrested and incarcerated inside an old U.S. naval base.

"Cuba (and the U.S. State Department) got some ‘splainin to do!" implied the Ricky Ricardo-like statement from Cuban-American Ileana Ros-Lehtinen. “This incident should serve as a wakeup call to the (Obama) Administration, which over the past few months has been leading an apparent effort to normalize relations with Cuba, that it cannot continue to engage the Castro regime,” read the statement by the former Chairwoman of the House Committee on Foreign Relations. “This revelation confirms once again that Pyongyang must be re-designated on the State Sponsor of Terrorism list as it continues to cooperate with the Cuban regime, a designated State Sponsor of Terrorism country, in order to undermine U.S. interests.”

At first Raul “El Guapo” Castro tried threatening the Panamanians behind the scenes with stern diplomatic notes. Then last Saturday, in the manner of Don “Da Godfather” Corleone sending Tom “Consigliere” Hagen to Hollywood for a chat with director Jack Woltz, Castro sent his “Vice Foreign Minister” (court eunuch) Rogelio Sierra Díaz to Panama for a “chat” with President Martinelli, whose response was identical to Woltz. So Castro’s court eunuch scurried home with his tail behind his legs.

But instead of the famously equine and bloody Corleone response, Castro -- on the hot-seat, without leverage and without any room to maneuver -- issued a half-heated mea culpa, claiming the two anti-aircraft missile systems, nine missiles, two Mig-21 fighter jets and 15 jet engines hidden on the ship. The North Koreans were going to repair the items and promptly return them to Cuba, says a straight-faced Castro. “No Tickee, no Missiles!”

Last month North Korea’s military chief General Kyok Sik Kim and a much-bemedaled entourage visited Cuba and stayed for a week meeting with, among others, Raul “El Guapo” Castro himself. We came, "to find colleagues in the same trench: the Cuban comrades," snapped the scowling North Korean general much in the inscrutable manner of Charlie Chan.

Hugh Griffiths, a spokesman for Stockholm International Peace Research Institute, reports that a few months ago they tracked a secret flight from Cuba to North Korea that for some fascinating reason took a path over central Africa! “Given the history of North Korea, Cuban military cooperation and now this latest seizure, we find this flight more interesting,” deadpanned Griffiths, sounding much like the famously taciturn Ingmar Bergman. “After this incident there should be renewed focus on North Korean-Cuban links.”

These links, by the way, didn’t start last week. On ABC’s “This Week” circa October 5, 2003, host George Stephanopoulos interviewed CIA weapons inspector David Kay regarding what his team found in Iraq. "I would contend we’ve already found things that if they had been known last December, January, February would have made huge headlines, said Kay. “Clandestine labs in the biological program, North Korean missiles going to Cuba…”

All the above notwithstanding, the men today entrusted with America’s defense have traditionally considered Castro’s KGB-mentored Terror-Sponsoring regime less dangerous than the Frito Bandido. To wit: “Today, the Cuban 'threat' is a faint shadow, change is afoot in the Cuban leadership,” wrote then Chairman of the Senate Foreign Relations Committee John Kerry in Dec. 2009. His piece loudly banged the drums for (further) opening U.S. travel to Cuba, thus (further) securing the Stalinist regime’s financial lifeline -- thus (further) enriching and entrenching the only people in Cuba with guns, who also own Cuba’s main money-maker. Castro’s KGB-trained secret police and military, you see, enjoy majority ownership of Cuba’s tourism industry.

Labeling the Castro regime a threat was “just goofy,” snickered then Senator Chuck Hagel in 2002, while also banging the drums to lift the “embargo” (i.e. further reward, enrich and entrench the Stalinist regime that came closest to nuking his homeland and succored every terrorist group from the PLO to the FARC to the Tupamaros -- and is now apparently arming North Korea).

And lest you think these nowadays vital U.S. officials have “grown in office” -- or even taken much note of the North Korean-Cuban collusion -- here’s a fascinating datum: State Department officials and Cuba will commence migration talks this very week!

In fairness, Kerry and Hagel figure among a fine tradition of crackerjack U.S. statesmanship regarding Cuba. To wit:

“Fidel Castro is not only NOT a communist -- he’s a strong ANTI-Communist fighter. He’s ready to help us in the hemisphere’s anti-communist fight and we should share our intelligence with him."(CIA Cuba "expert" Frank Bender, April 1959.)

Raul Castro had been assigned a KGB handler since his visit to the Soviet Bloc in 1953, by the way. And when arrested in Mexico in 1956, Ernesto “Che” Guevara was found to have, in his very wallet, the calling card of the KGB’s top Latin American agent Nikolai Leonov. Many Cubans knocked on many Washington doors trying to get this across. Obviously to no avail.

This “blind spot,” let’s call it, caught the eye of many knowledgeable Cubans from day one. To wit: "My brothers’ feeling of hatred for this country cannot even be imagined by you Americans," marveled Fidel and Raul’s bewildered sister Juanita while testifying to the House Committee on Un-American Activities upon defecting in June of 1965. "His intention -- his OBSESSION -- is to destroy the U.S."

A surely unrealistic -- and probably faded -- obsession nowadays. But surely the Castro brothers haven’t come around to favoring our well-being nearly as fervently as our Secretaries of Defense and State seem to favor theirs.

So amigos, when it comes to our nation’s defense, we’re in good hands with this State Department!