Next to Anthony Bourdain, Paula Deen’s a Saint 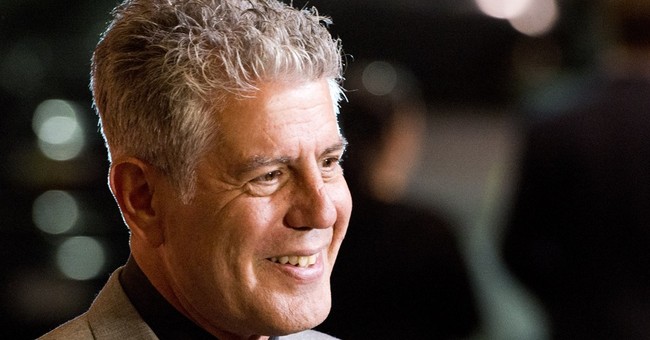 Paula Deen occasionally used the N-word, we’ve recently learned. For this she was tarred and feathered, drawn and quartered, and fed to the ‘gators.

Anthony Bourdain, on the other hand, headlined a propaganda junket to help secure the financial lifeline for the Stalinist regime that jailed and tortured the longest suffering black political prisoners in modern history.

You’ve probably noticed whose side the media takes.

Allow me to explain: On the July 12th 2011 episode of The Travel Channel’s No Reservations Bourdain traveled to Cuba highlighting the exquisite food (most people claim it s*cks big time, the best is manifestly in Miami) the friendly and perennially dancing and singing natives, the exhilarating island sights and sounds, etc. "Yes, go to Cuba!" gushed Bourdain at the show’s conclusion.

Neck to neck with Venezuelan subsidies, Castro’s Stalinist regime lives off tourism. As thoroughly documented in a new book, Castro’s family, secret police and military enjoy majority ownership of Cuba’s tourist industry. Concurrent with his TV propaganda piece, Bourdain’s Travel Channel page posted a link to the Castro-regime-owned (stolen at Soviet gun-point from capitalists who built it) Hotel Nacional, for quick and easy reservations in Havana!

In brief, Bourdain's Castroite visa-issuers got a fabulous return.

Not far from where Bourdain wined and dined on food most Cubans savor only in their dreams (in 1958 Cubans enjoyed the 3rd highest protein consumption in the Western hemisphere, by the way) black political prisoners were jailed in conditions that make Nelson Mandela’s incarceration look like a stint in a Motel 6. These black Cubans crimes?

Publicly quoting the works of Martin Luther King and the U.N. Declaration of Human Rights, mimicking Gandhi’s peaceful protests against the British. Please note: these Cuban human-rights activists did NOT mimic Mandela’s against South Africa’s (placing bombs in public places.)

Among these black prisoners was Dr. Elias Biscet, an Amnesty International Prisoner of Conscience who was awarded (obviously in absentia) the Presidential Medal of Freedom by President Bush in 2008. He was finally released just a month before Bourdain’s propaganda junket. But you’ve never heard of him, right?

Many Cuban blacks suffered longer incarceration in Castro's dungeons and torture chambers than Nelson Mandela suffered in South Africa's. In fact, they qualify as the longest-suffering political prisoners in modern history. Eusebio Penalver, Ignacio Cuesta Valle, Antonio Lopez Munoz, Ricardo Valdes Cancio, and many other Cuban blacks suffered almost thirty years in Castro's prisons. These men (and many women too, by the way, black and white) suffered their tortures 90 miles from U.S. shores.

But you’ve never heard of them, right? And yet from CNN to NBC, from Reuters to the AP, from ABC to NPR, Castro’s fiefdom hosts an abundance of U.S. and international press bureaus and crawls with their intrepid “investigative reporters.” Now when it came to Nelson Mandela’s incarceration 8000 miles away? Whoo-Boy! They reported everything.

Most of Cuba’s Human rights activists are black, many are female. As I write, Sonia Garro sits in a pestiferous dungeon (almost walking distance from where Bourdain feasted.) Her crime? Same as above but with the added insult of carrying flowers during her peaceful marches.

Again you’ve never heard anything from the media about Sonia Garro’s suffering 90 miles away. But I bet you heard and read about Winnie Mandela, 8000 miles away.

A year before Bourdain filmed his Castroite infomercial, his hosts jailed and murdered black human rights activist Orlando Zapata Tamayo. This black Cuban had endured an 83-day hunger strike seeking (vainly, as usual) to alert the world of the Castro regime's cowardly Stalinism and racism. Finally a series of savage beatings by his Communist jailers finished him off. Naturally, the intrepid investigative media was no more revelatory of his death than they'd been of his jailing or hunger strike.

Samizdats, smuggled from Cuba by eye-witnesses, reported that while gleefully kicking and bludgeoning Tamayo, his Castroite jailers yelled, "Worthless ni**er!"

“If I were on at seven at night and loved by millions of people at every age,” sniffs Bourdain about Deen, “I would think twice before telling an already obese nation that it’s OK to eat food that is killing us.”

Well, If I was as popular as Bourdain and claimed his social conscience and “anti-establishment fesitiness,” I’d think twice about helping bankroll an official State Sponsor of Terror that came closest to nuking my nation and jailed and tortured the most political prisoners (per–capita) in the Western hemisphere. And is still at it.

Oh I know, I know, the media mantra has it that opening Cuba to tourism will quickly convert it into a combination Shangri-La, Land of Oz and Cancun. “ I mean, come on Humberto! It just sounds so plausible! “

Yes, and until a few people decided to look behind the surface plausibility a flat earth also sounded plausible.

So let’s do like beatnik Bourdain professes and shun official corporate and establishment hype, man. Let’s get down and dirty and dig it, daddy-oh. Let’s cut the cr*p and look at the actual facts on the ground. Fine:

Every year for the past decade over ten times as many tourists have visited Cuba as in the 50’s when the island was billed by the media (and Godfather II) as a” tourist playground.” Last year almost 3 MILLION tourists visited Cuba. Given all the loopholes opened by the Obama team about 400,000 of these were from the U.S. (That’s twice the annual total as during Godfather II years, by the way.) For a decade now Castro’s fiefdom has enjoyed the most tourists per capita in Latin America, more than Mexico’s. The Castro police and military-owned tourist facilities are virtually maxed out. More tourists could barely fit in Castro family fiefdom. Last year these vacationers dropped almost $3 billion worth of their loonies, pounds dollars, marks etc. into the coffers of the Stalinist regime. Result?

The Cuban people suffered a ten year record of repression at the hands of the fat and happy KGB-trained security forces (slightly topping the 2011 record that coincided with the record tourism revenues that year.)

In brief: record tourism=record repression. In brief: Every shred of observable evidence proves that travel to Cuba enriches and entrenches the KGB-trained and heavily-armed owners of Cuba’s tourism industry, and thus the most highly motivated guardians of Cuba’s Stalinist and Terror-Sponsoring status-quo.

But let’s face it: “Flat Earth Societies” do still exist...