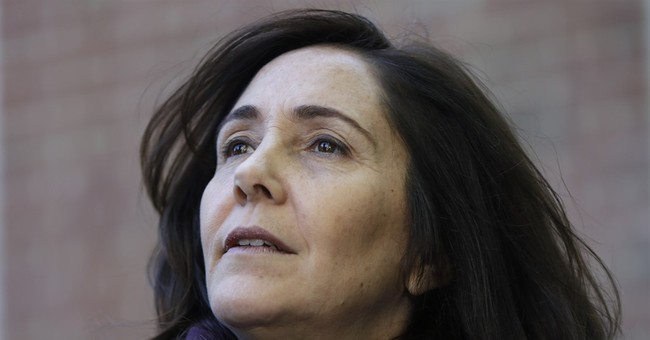 Protecting U.S. diplomats from terrorists on foreign soil is one thing. Protecting terror-sponsoring diplomats on U.S. soil quite another. Our State Department is currently under heavy fire for failing at the former.

But a diplomat from a nation the U.S. officially classifies as a State-Sponsor-of-Terror has no complaints whatsoever against our State Department’s security services. This diplomat and her entourage -- under a heavy State Dept. security detail -- safely sashayed through New York and Philadelphia for almost two weeks this month without being subjected to so much as a frown from any bystander. When she stopped for Sunday brunch in Philadelphia’s Old City one thing that caught the eye of the local paper was "heavy security" surrounding Raul Castro’s daughter Mariela and her Cuban co-horts.

For the second time in slightly over a year Cuban dictator Raul Castro’s daughter Mariela, an official of her father and uncle’s Stalinist, terror-sponsoring regime, was granted a U.S. visa. The purpose of her visit to the nation her uncle and father craved to nuke, that they trained and armed terrorists from the Black panthers to the Weathermen to terrorize, and that millions of her hapless compatriots crave as refuge from the Stalinist horrors her family inflicts--the purpose of this visit was to lecture Americans on human rights while receiving honors and awards for her own contributions to the cause of human rights.

The forum and her award were courtesy of the Philadelphia-based gay rights group Equality Forum, who also honored Barney Frank that weekend.

The faithful communist apparatchik of a regime that jailed political prisoners at a higher rate than Stalin during the Great Terror, murdered more Cubans than Hitler murdered Germans during the Night of Long Knives, craved to incite a worldwide Nuclear war, and in the process converted a nation with a higher per-capita income than half of Europe into one that repels Haitians -- this same communist apparatchik is on record as favoring gay-marriage, you see. Hence the human-rights honors and awards for Mariela Castro.

To former Congressman Frank’s credit, even he seemed to find the award to the communist official from his partners in gay activism slightly disturbing. While sharing a panel with Castro and mildly praising her current work, Frank forthrightly called her father and uncle, "among the great betrayers of liberalism and human rights."

In addition to her forum and honors in Philadelphia, Mariela Castro was honored at New York’s International Action Center with an earlier forum and more ovations. Again under the protection of a State Dept. security detail on U.S. taxpayers’ dime, Mariela Castro -- to loud ovations from an organization founded by a former U.S. attorney general, Ramsey Clark -- denounced the justice system of the nation that feted and protected her. In particular the IAC crowd thanked the Cuban official for harboring U.S. cop-killer fugitive Assata Shakur, who was put on the FBI most wanted list as a domestic terrorist just two weeks ago. Raul Castro’s daughter -- to loud ovations -- also denounced the U.S. convictions of the Cuban terrorists known as "The Cuban Five," four of whom currently serve sentences for conspiracy to murder (Americans), manslaughter and spying (against America.)

Obviously no "stand-down" order came when our State Dept. was tasked with protecting this Terror-Sponsoring official. The perceived threat to Mariela Castro’s security apparently issued from vicious terroristic right-wing Cuban-Americans. Most of these nuts are Republicans, after all -- many of whom are even Tea-Partiers! Last 9/11 someone at State (or higher) apparently could not imagine terrorists nearly as vicious, cunning or bloodthirsty as these Cuban-Americans in a place like Benghazi.

Mariela did all her U.S. bashing in New York (again, while dutifully protected at U.S. taxpayer expense) and while standing under a huge poster of Che Guevara, who denounced the U.S. as "the great enemy of mankind!" Americans as "hyenas fit only for extermination!" -- and who was barely thwarted from incinerating millions of them with nuclear missiles.

From there Cuban official Mariela Castro travelled to Philadelphia and received --on the U.S. taxpayer’s dime -- a tour of the Liberty Bell, which her father, uncle and godfather (Che Guevara) planned to blow up in partnership with the Black Liberation Front in 1965. The communist terror plot also called for blowing up The Statue of Liberty and The Washington Monument. The Black Liberation Front hatched it with the help of Che Guevara who they visited in Cuba in August of 1964. They buttoned down the terror details during Che Guevara’s visit to New York in December 1964 while the Cuban official basked in rock-star adulation by Manhattan’s elite at a party hosted by Bobo Rockefeller.

As the old saying goes: "only in America!"