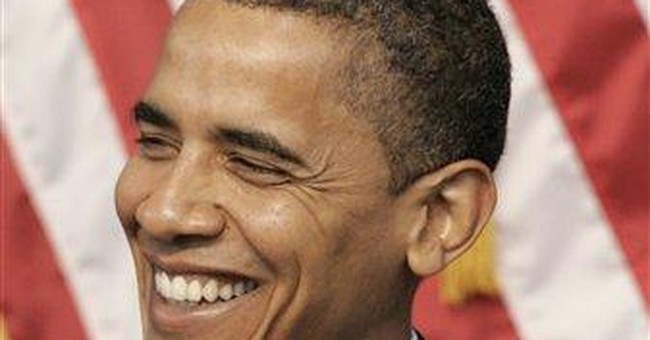 While Senator Obama worked a warm audience at the U.S. Conference of Mayors in Miami this week-end, protesting Bush and Mc Cain's “tax-cuts for the wealthy” and promising billions in federal hand-outs, a small group of Cuban-Americans stood outside the Intercontinental protesting Obama himself.

More specifically, they protested some of Obama's top advisors: Gregory Craig, who serves as Obama's chief advisor on Latin America, and Erich Holder, who heads Obama's vice-presidential selection team. Both of these gentlemen had key roles in “legally” perfuming the shanghaiing of Elian Gonzalez. At the time, Craig served as lawyer for Elain's father, (i.e Fidel Castro), and Holder served as Deputy Attorney General under Janet Reno.

"That was eight years ago,” Obama responded when plans for the Cuban-American protest were announced last week. “Obviously it was a wrenching situation for the families, but I'm running for president in 2008 and my focus is: how do we create a Cuba policy that will create political freedom on that island and allow the people who live there to prosper?"

“My fear is that those who collaborated with the Cuba's communist government and made a great mistake with a defenseless child,” said Elian's Miami uncle, Delfin Gonzalez, “will make the same mistake again against this nation that is facing danger from terrorism.”

In fact, outside of Florida and New Jersey, the Elian Gonzalez issue should not discomfit the Obama campaign in the slightest. Polls from the time show that 70 percent of the American public fell for the Castro/Clinton/Craig media ruse, and favored the boys return to Stalinist Cuba.

Dan Rather had a major role in this ruse. On April 16, 2000 his 60 Minutes segment featured an interview with Elian's father, Juan Miguel. America saw an innocent, bewildered and heartsick father simply pleading to be allowed to have his motherless son accompany him back to Cuba, his cherished homeland. How could anyone oppose this? How could simple decency and common sense possibly allow for anything else?

"Did you cry?" the pained and frowning Dan Rather asked the "bereaved" father during the 60 Minutes drama."A father never runs out of tears," Juan (actually, the voice of Juan's drama school-trained translator) sniffled back to Dan. And the 60 Minutes prime-time audience could hardly contain their own sniffles.

Here's what America didn't see: "Juan Miguel Gonzalez was surrounded by Castro security agents the entire time he was in the studio with Rather." This is an eye-witness account from Pedro Porro, who served as Dan Rather's translator during the famous interview. Dan Rather would ask the question in English into Porro's earpiece whereupon Porro would translate it into Spanish for Elian's heavily-guarded father.

"Juan Miguel was never completely alone," says Porro. "He never smiled. His eyes kept shifting back and forth. It was obvious to me that he was under heavy coercion. I probably should have walked out. But I'd been hired by CBS in good faith and I didn't know exactly how the interview would be edited — how it would come across on the screen.

"The questions Dan Rather was asking Elian's father during that 60 Minutes interview were being handed to him by attorney Gregory Craig," continues Pedro Porro. “It was obvious that Craig and Rather where on very friendly terms. They were joshing and bantering back and forth, as Juan Miguel sat there petrified. Craig was stage managing the whole thing — almost like a movie director. The taping would stop and he'd walk over to Dan, hand him a little slip of paper, say something into his ear. Then Rather would read the next question into my earpiece straight from the paper."

“Midway through watching that 60 Minutes broadcast, I felt like throwing up," said Porro. "My stomach was in a knot." His worst fears were confirmed.

But the Craig/Rather 60 Minutes soap opera was a major national hit. As polls showed, America ate it up. Craig, after all, had come to Castro highly recommended (by Clinton). And he performed magnificently, employing a major media outlet as aides, props and publicists for Castro's case. Fidel Castro, of course, is an old pro at this.

Amongst those who fell prey to Castroite chicanery were Tony Snow and Mark Steyn, amazingly enough. The latter sneering at that “crazy Miami crowd” a “lawless Hispanic mob trashing Miami.” Elian's doting cousin, Marisleysis “may have the cutest butt on network TV,” wrote Steyn, “ but most of us dearly wish some FBI sharpshooter would fire a tranquilizer dart into it.”

These commentators, however bright and articulate in most matters, are innocent of life under Stalinism and without the benefit of the revelations that come from frequent contact with those cursed by fate to have suffered such. So we shouldn't judge them too harshly here. If Steyn's current predicament in Canadian courts saw him deprived of defense counsel and menaced by decades in torture chambers or death by firing squad he'd have a much better appreciation of that “crazy Miami crowd's” motivation, I can assure you.

He and Snow simply could not fathom what was going on behind the scenes, To them the Elian matter came across as a simple custody dispute over a motherless boy, with some tacky and blockheaded Miami cousins on one side, and a bewildered and sincerely bereaved Cuban father on the other. Steyn and Snow's hearts were in the right place, but their normally discerning heads were elsewhere, diverted by the Castro/Craig soap opera.

Upon initially accepting the case, Gregory Craig had flown to Cuba for a meeting with Fidel Castro. To effectively stage-manage the boy's shanghaiing, Craig explained to Castro, her needed Juan Miguel in the U.S.. But according to most accounts Castro balked. No plantation-owner likes his slaves traveling (unescorted) outside his plantation. Plus, Castro was no doubt privy to Juan Miguel's early communications with his Miami cousins , thanking them and saying he'd be soon make his own escape and join Elian.

So it took a little doing , but Craig finally prevailed. That Juan Miguel, though visiting a free country, would be constantly accompanied by Castro's conscientious “escorts” (as witnessed by Pedro Porro) was undoubtedly the gist of the deal with Craig,

So in effect, the man who currently serves as Obama's top advisor on Latin American agreed to function as a fully-deputized agent for a Stalinist regime's KGB-trained secret police.

The people protesting in Miami know that such an appointment is not a promising start in--as Obama himself put it-- “creating a Cuban policy that will create political freedom on that island.” Save your campaign money and breath Mr Obama. Forget these voters.