A SOTU Over Before Its Begun 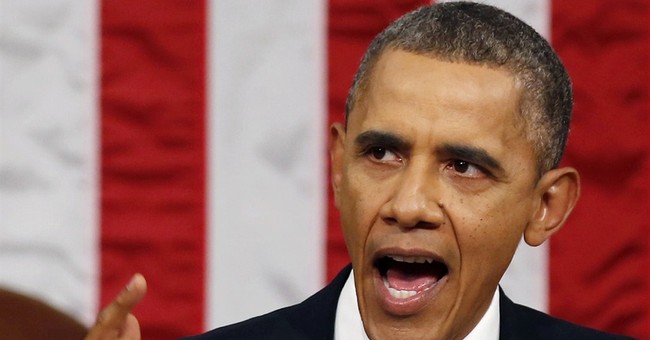 When George W. Bush and the GOP got "thumped" over the conduct of the war in Iraq in November 2006, 43 responded to the will of the people, made changes, announced the Surge, and graciously welcomed Nancy Pelosi as the first woman Speaker at the start of his 2007 State of the Union Address. Not much else is remembered from the next two years, except victory in Iraq and a market panic in the fall of 2008 brought about by the popping of the housing bubble. That panic brought us President Obama.

Tonight President Obama will give a speech few Americans will watch much less remember, and it will lack even a gracious gesture such as Bush's appreciation of Pelosi. "Petulant" has been the tone of the past ten weeks, and while Bush acted within his constitutional authorities to dispatch troops to Iraq in 2007 in sufficient numbers to secure victory in Iraq, and while President Obama has acted within his constitutional authority to begin the return of those troops after his withdrawal of them gave terrorism new life and force can in the rise of ISIS, most of the news now is about a president acting domestically far beyond any established precedent in order to try desperately to stay relevant even as his Class D set of advisors manage to miss the moments --like the march in France-- that could make extend President Obama's shelf life as a force on the world and national stage.

In truth --the hard, cold political truth-- President Obama is a spent force in American politics. Capable, of course, of creating more mischief and of obstructing urgently needed repairs brought about by his epic incompetence, but spent. Like a zoning board packed with no-growthers after an earthquake, President Obama can veto rebuilding, for a time. His inactivity and inane decrees can make a terrible situation worse on the health care front, and can accelerate the collapse of care even as meaningless numbers march out of the mouths of his advisors. His EPA can continue its job killing assault on every industry that employs high wage blue collar workers. He can continue to deliver nonsense speeches about his Harvey-the-rabbit programs he expects Congress to pass.

President Obama can, in short, pretend all is well and major initiatives are afoot. But Washington is a hard place for such posing. Everybody knows, and increasingly, everyone is laughing out loud.

Valerie Jarrett is the president's closest advisor, and appears set upon enjoying her last two years of giving extraordinarily bad advice, aware she is doomed to rough treatment by the waterfall of memoirs that will spill out and by historian's judgments. Her appearance last week on CNN with Wolf Blitzer was, well, a bit other-worldly as Blitzer tried to get her to say something relevant about terrorist arrests and gun battles in Belgium while Jarrett clung to talking points about paid sick leave. The most powerful woman in America turns out to be, well, vacuous. Rasputin, without an idea of what to do other than be Rasputin and dine out.

So watch if you will, and pity the poor network anchors who are going to have to try and fill a couple of hours after Senator Ernst finishes up with talk about what the president can and cannot do via executive order, all the while knowing that any executive order can be undone on the first day of the next presidency. Mitt Romney's 15 minutes on the Midway Friday night had more relevance to the next 24 months than the president's hour plus tonight.

The president might have been relevant to the next two years had he signaled anything except contempt for the people's decisions this past November. Perhaps he will turn towards engagement still, but the slight rise in his polling probably looks to him like an oasis rather than the mirage it is. Expect instead of engagement more pettiness mixed with promises he cannot deliver, and the steady deterioration in conditions abroad. We already know that these two years could be as bad as Bush's last six months because the crises ahead are with killers, not share prices.

He is out of ideas and out of gas, and the country is out of patience with the in-over-his-head president and his D Team of short-timers, already pocketing matchbooks and other souvenirs. A lock to finish last in presidential polls for the balance of his life, his name anchored to a law that is sinking the health care realities of millions, and the man who threw not just his allies under political buses, but millions into the hands of ISIS, The Taliban and Boko Haram while systematically undermining constitutional government --this is the president as he begins his last lap. Perhaps he has some kick left and won't just limp on in, but that kick could only come from working with the very people he has spent ten weeks insulting, and by appealing earnestly to voters to whom he has been messaging indifference since they pummeled him in the fall.

Don't expect much from tonight, or from all of 2015 and 2016 except one grand GOP nomination scramble. Put your hope in the French and the Israelis, and a veto-proof majority in favor of imposing sanctions on Iran, and watch as the country experiments with an all-but empty Oval Office for two years.