A Lawless President, Salting The Fields 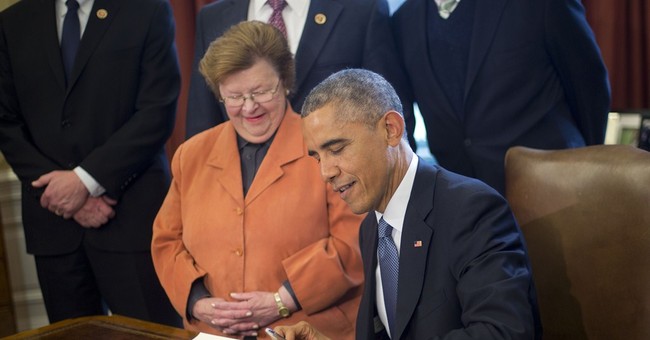 First, a programming note. The president addresses the nation tonight at 8 PM EST. My show will add an extra hour to collect reactions from callers and experts, and thus will be carried on most of my stations until 10 PM EST. You can listen online by clicking the button above or via the app if you are away from the car or home radio.

Pete Wehner is exactly right: "Mr. Obama is about to commit an act of constitutional infamy. This is a stain that will stay with him."

Wehner also points to another of the Beltway's very smart, very restrained observers, Ron Fornier of The National Journal, who said of the president in a discussion not of the immigration lawlessness but of the breakdown and patchwork fixes concerning Obamacare that "the central attribute you have to have as any leader, in any walk of life and certainly in government is trust and this president has destroyed the credibility of his administration, himself and government itself."

Lawless. Infamous. Untrustworthy. Echoes of how 1974 must have sounded to folks living in the nation's capital.

Contrast those descriptions with that given by New York Times essayist Mark Leibovich to New Jersey Governor Chris Christie this very day: "[Christie] has a preternatural talent for appearing blunt and insistent when he is being cute and obfuscating. He is also a savvy tactician."

But there were jobs which, with sufficient seniority, you'd skip, even if it was the last bag of the day. Crazy Lou --who was given to every newbie because he yelled at you. A particular doctor who played worse then than I do now. And Mr. D.

Mr. D was a cheater. It was ignominious to be associated with him. Everyone knew he was a cheater. Everyone he played with. The pro shop staff. And of course the caddies. Everybody knew. He was disreputable.

So Mr. Obama has become, and so he will inalterably remain after 8 PM tonight. And not just to the Wehners and Forniers inside the Beltway, or me and my colleagues on the airwaves, or the GOP opposition within Congress.

No, Mr. Obama will be known to be a cheater and a fraud to his own party base, and especially to the people he purports to help. The people in the country illegally will know shortly that this stunt tonight does not help them and may in fact hurt them --badly. The collision of what is in essence a letter of recommendation from the president to employers with their genuine worries about liabilities under state law and about their fiduciary duties to their customers is going to be instant, and not to the good of the illegal population. Employers are going to flee the president's testimonial that, if he were king of the forest, not queen, not duke, not earl, he'd let this person have a green card. Because he's not king, he cannot bless this person's employment in the real world of tort liability and state law. He cannot solve the issue of Social Security and unemployment insurance withholding. What he can --and will do tonight-- is mark the illegal as someone not worth the trouble of hiring.

The president simply cannot bestow a green card. Just a blessing. An Obama blessing. The blessing of a cheater.

The president's lawless act will have the apparently contradictory impact of both making life harder for "those in the shadows" by increasing the reluctance of employers to hire the obviously illegal, while at the same time attracting millions more north across the fenceless border. Employers are simply going to be less willing to hire the obviously illegal because of a host of other laws the president cannot change, but the underground and top line messaging of the president's act will be an amplified "Olly olly oxen free" to the millions who wish they were in America and not living in their own country.

Democratic Senator Mary Landrieu is of course the first and biggest loser. This assures a much larger turnout in her run-off against Congressman Bill Cassidy on December 6, and they won't be rushing to support the cheating president's close friend Mary who couldn't even get six of her cheating president's pals to support her on the pipeline vote.

Other losers are those who would see a common sense reform of the immigration laws. Whatever people think of immigration reform --and I am for it-- they don't much cater to diktats from D.C.'s first citizen as opposed to deals worked out among competing interests. That the president is an increasingly powerless lame duck makes the insult more pronounced. "How dare he?" is on not a few minds. Democratic minds. Hillaryworld minds. Hillary's mind.

Oh there will be golf claps over at MSNBC, and a few of the professional immigration reform activists --those who aren't serious about getting a real bill with real reform through a Congress that might have done so, which I hope still will do so but which is increasingly unlikely to act because of the risk of rewarding the president's lawlessness.

That lack of regard of the institutions of the constitutional government we have is why Senator Lindsey Graham and I disagreed about whether the Senate ought to restore the judicial filibuster anytime soon. (Graham wants the 60 vote rule patched up and put back right away; I want it kept at 50 at least until we see if a GOP president is elected in 2016 so he or she can have two years of 51 vote confirmations of judges. (National Review's Ed Whelan agrees with the "punish the Democrats" school. ) It will also be why many immigration reform-minded legislators will slam the door now.

"That which gets rewarded gets repeated" will be their mantra. They know that a "regularization" --not citizenship-- of most of the illegal population, preceded by construction of a long, strong, double-sided fence the completion of which triggers a guest worker program and non-citizens status for most of the illegal population is a good thing. They learned --again-- from 2013's misfire, just as they learned from 2006's misfire, to seek the middle way between amnesty and continuation of the status quo. They were in a position to act in early 2015 --until the president's wrecking ball swings tonight.

That may be the president's goal in fact, to wholly wreck a modest but effective border fence/regularization/guest worker program. Good legislation, easily written. Short, comprehensible, flexible --a political and policy victory for 70% of the people who care. The president couldn't have a GOP Congress doing in a couple of months what he could not yammer his way to in six years, so he is preemptively attempting to destroy the common ground on which Republicans and Democrats could walk on this issue: fence/regularization/guest worker program. President Obama is salting the fields.

And he is setting himself up in his mind for some post-presidency symposia and thunderous applause moments from increasingly hard-left groups. Fine. He will veto the Keystone XL: pipeline when it comes his way as well because he's counting on Mr. Steyer to take care of him come 2017.

That's where we are: A widespread recognition that the president cheats, and that he dissembles. He may outright lie tonight --we will see.

But no one not in love with him as family or a close friend knows other than the truth: He is about to do a very, very bad thing, a disfigurement of the Constitution which will lead to future disfigurements. Wait until the environmentalists learn that a GOP president can suspend enforcement of their beloved if crazy Endangered Species Act. Wait until all sorts of special interests realize that their special interest legislation can be suspended at a stroke of a pen.

D.C.'s permanent class may feel an involuntary shudder tonight, when it realizes all that they sell --their access and their ability to deliver lines of law in lengthy bills-- is at best fragile. It is a big night for the president, and a disastrous one for the Constitution.