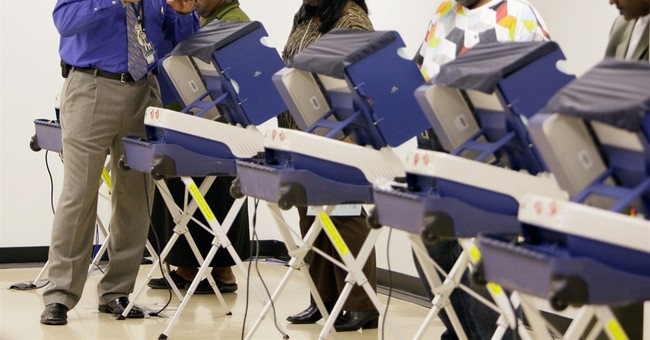 Byron York reports that Michelle Nunn's numbers are falling and have been falling since mid-October, that Republican David Perdue is ahead and gaining ground. Either Perdue will win outright Tuesday or in a January run-off.

So will Republican Bill; Cassidy win, but almost certainly in a December run-off. Mary Landrieu has well and truly worn out her welcome in Louisiana.

Dan Sullivan should win in Alaska, and that would be eight.

Toss-up races include Thom Tillis in North Carolina, Scott Brown in New Hampshire, and even Ed Gillespie in Virginia. Take one of those three and the GOP has nine pick-ups, provided that Kansas voters retain their reputation for common sense and don't fall for the self-serving Greg Orman two-step, the one that leads him right into the Democratic caucus. GOP gains could reach double digits, but be happy with a net of six.

Add in about ten new House seats for the GOP and you have a landslide, a repudiation of President Obama, and no one I know --professional or amateur-- believes there is anything that can be said to done to either increase the likelihood of a Republican coming out to vote or in anyway dampening his or her desire to do so to vote against President Obama.

President Obama was right. He is on the ballot. Squarely in the middle of every single vote.

How has he offended thee? Let me count the ways:

First, long ago, the Obamacare jam down, but since his re-election in 2012 followed the attempt to smash religious liberty via the HHS rules, then the botched "rollout" of the exchanges and finally the hidden rate increases, waiting just offstage where everyone can hear them coiling tighter and tighter and ready to spring out to ruin the Christmas season with shocking premium hikes across the country.

Then there is the president's "red line" that vanished in Syria, a "jayvee team" that became the beheading barbarians of ISIS in both Syria and Iran and that has became the biggest, best financed terrorist state in history, and of course a near-nuclear Iran given more overtimes in which to reach their goal of a nuke than the Soviet basketball team in 1972 by President Obama. Putin of course, engorged on Crimea and now dining out on eastern Ukraine because this president signaled in 20099 he was a push-over, pulling missile defense systems out of Poland and the Czech Republic. And our ally Israel? Rewarded just this week with the slander of its elected leader, Benjamin Netanyahu, being branded a "chicken____" by this president's "senior foreign policy advisor."

We have also been treated to an endless series of speeches both condescending in tone and utterly empty of substance. Not a single sit-down of significance with the Republicans, just a tactical choice by the president rely in 2013 to try and run against them in 2014 as the party of obstructionists. Thus nothing happened for two years, but voters have seen through that charade.

Judges from the far left, appointees from farther left still, and a declaration of intent to govern extra-constitutionally via a pen and executive orders on such matters of first importance as immigration regularization.

The obstruction of investigations into the IRS, the VA, the Secret Service and now the bumbling, politics-driven CDC posturing even as Australia and Canada issue common-sense travel bans on visa holders from the Ebola hot zone. The leaders of those countries get serious, but we get a White House lecture full of straw men with a gang of compliant non-sequiturs in white coats behind him, seemingly unaware that one can both honor courageous health care workers and insist that they act out of an abundance of caution on return home while also insisting that the central issue is not Americans returning, but visa holders flowing in without a pause.

Finally, there is the ongoing retreat from Afghanistan which like the Obama retreat from Iraq will not end well. President Obama does not care, not does he care for the military he has gutted, and not merely cut. Secretary Gates did some cutting. Secretary Panetta did some more. Now President Obama is just slashing and burning at the Pentagon, even as he pumps up the Environmental Protection Agency.

And to top to all, the culture of disrespect for religious liberty he has fostered has metastasized now, issuing forth in the form of subpoenas to pastors in Houston and campus "de-recognitions" of InterVarsity across all of the California State University System. Tec. Etc. Etc.

So Tuesday is the last chance to render a clear, not-to-be-denied verdict on President Obama and his tenure. Oh, he will hang around the margins of the 2016 race, but Tuesday's vote is your last chance to grade the president for what he has done and said.